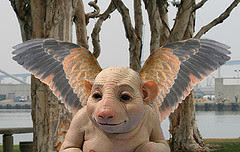 In Israel, where there is one suspected case, the deputy health minister, Yakov Litzman, said the disease will not be known as swine flu, because religious Jews do not eat pork. "We will call it Mexico flu. We won't call it swine flu," he said. ~ Guardian.

What are they calling the flu in New Zealand, where the number of cases has skyrocketed to 60 today?

The flu virus spreading globally should not be called "swine flu" as it also contains avian and human components and no pig allegedly has been found ill with the disease so far, the French group, the World Animal Health says.

A more logical name for it would be "North-American influenza," a name based on its geographic origin just like the Spanish influenza, another human flu pandemic with a non-human animal origin that killed more than 50 million people in 1918-1919, notes the WAH.

"The virus has not been isolated in animals to date. Therefore it is not justified to name this disease swine influenza," the Paris-based organization said in a statement, according to the Guardian.

But Mexican Flu is more logical, of course, and more closely identifies the country most people associate with this outbreak.

This strain of "swine flu," we are told, is "A/N1H1." That is intriguingly, since the 1918 Spanish flu pandemic was caused by an unusually virulent and deadly Influenza A virus strain of subtype H1N1. Also, worthy of noting, the Spanish Flu allegedly began in Fort Riley, Kansas. In the United States the disease was first observed at Fort Riley, Kansas, United States, on March 4, 1918.

Then why is it called "Spanish flu"?

The origins of the name has everything to do with the media. Spain had freedom of the press, and it lead to correct and complete information about the epidemic being published. The Allies of World War I came to call it the Spanish flu, primarily because the pandemic received greater press attention after it moved from France to Spain in November 1918. Spain was not involved in the war and had not imposed wartime censorship.

Meanwhile, on the political front, my state's senator is getting a lot of media notice during the run-up to this possible new pandemic. Maine Senator Susan Collins, the supposedly moderate but known locally as a strident, attention-seeking politician, had demanded cuts in health care spending in exchange for her support of a watered-down version of the stimulus. At the time, she complained about the pandemic funding: "Does it belong in this bill? Should we have $870 million in this bill. No, we should not."

As recently as this weekend, Collins' official website highlighted the fact that she led the fight to strip the pandemic preparedness money out of the Senate's version of the stimulus measure. The emergency services that would necessarily be on the frontlines in any effort to contain a pandemic got no funding in the $50 million for improving information systems at the Department of Health and Human Services (HHS). The Senate version of the stimulus plan included no money whatsoever for pandemic preparedness.

Ooops.
Posted by Loren Coleman at 7:15 AM

Just one question. Why should any measures used to fight a pandemic have to be funded with a stimulus bill?

The inevitability of a global pandemic has been trumpeted for years. Maybe , instead of waiting for stimulus bills to fund necessary programs like pandemic preparedness,the US should just cut a bit of fat off the already grossly overweight military budget.

Jeez, I just uttered a very heretical statement, didn't I?

According to the CDC, the first swine flu outbreak was observed at Fort Dix, New Jersey.

In early 1976, the novel A/New Jersey/76 (Hsw1N1) influenza virus caused severe respiratory illness in 13 soldiers with 1 death at Fort Dix, New Jersey. Since A/New Jersey was similar to the 1918–1919 pandemic virus, rapid outbreak assessment and enhanced surveillance were initiated. A/New Jersey virus was detected only from January 19 to February 9 and did not spread beyond Fort Dix.

A/Victoria/75 (H3N2) spread simultaneously, also caused illness, and persisted until March. Up to 230 soldiers were infected with the A/New Jersey virus. Rapid recognition of A/New Jersey, swift outbreak assessment, and enhanced surveillance resulted from excellent collaboration between Fort Dix, New Jersey Department of Health, Walter Reed Army Institute of Research, and Center for Disease Control personnel. Despite efforts to define the events at Fort Dix, many questions remain unanswered, including the following: Where did A/New Jersey come from? Why did transmission stop?