John Alva Keel, 79, a friend, Fortean, fierce fighter for his theories, professionally a writer and journalist, has died. A fellow admirer of Mothman and the anomalies all around us, such as the “name game,” is gone.

John A. Keel's non-fiction look at the very real unplanned twists in life were recorded in his 1966 novel, The Fickle Finger of Fate.

"Ufology is just another name for demonology," John Keel told me, a week before the September 11th attack on the World Trade Center, which occurred just a couple of miles from where he lives. 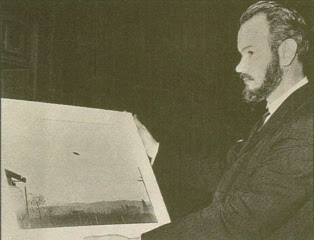 For more images and my complete, detailed obituary, please see "John A. Keel Is Dead."

What sad news. He was a fantastic researcher of the unknown. This is a tremendous loss to all who have known him or were fans of his works.

I didn't know his second name was Alva, which is very similar to the Spanish word Alba, from the Latin word Albus and that can mean "the light of dawn".

Obviously, there's a strong link between the word Albus and the term Elves, which in its most basic definition means "The shining ones".

Now, Mr Keel has taken his place among the shining ones. Godspeed.

Rest in Peace Mr. Keel. Perhaps now he is discovering the answers to these mysteries.

His "hero" was Charles Fort whose humor he tried to mimic. . .he was a decent human being.When I was in the hospital he came a visit. He hung on and off for years.