The Hillsdale bombing by Alex Youshock on August 24, 2009, seems self-fulfilling, in terms of it being a shock to the community where it occurred. On a deeper level, it continues the name-game theme seen recently with the death of John A. Keel and the involvement of the name "Ardmore" in clown and child abduction cases.

If you recall, the name Ardmore is a Gaelic word signifying high grounds or hills. John A. Keel pointed to hilltops (literally the "keels" of the high grounds) as the best places to observe Forteana. Furthermore, synchromysticism's godfather John Shelby Downard was born in Ardmore, Oklahoma.

Monday's school violence happened in Hillsdale, California, and, of course, there is a significant Hillsdale in anomalistic history.

The famous Hillsdale UFO sightings of March, 1966, involved reports from Hillsdale County, as well as those in Livingston and Washtenaw Counties, Michigan.

Over 100 witnesses (including policemen, college students, and a civil defense director) saw the other worldly objects, according to the histories of those times.

On March 21, 1966, the Detroit News summarized the report of four Washtenaw County sheriff's deputies who saw "three or four red, white and green circular objects, oscillating and glowing, near Milan about 4. a.m."

The paper published a detailed technical illustration of an object that looked like two inverted saucers placed together with diagrammed placement of lights, antennae and a seemingly transparent dome. Other sightings came to the attention of the media, with one group of witnesses describing a craft as "pyramid-shaped" and having a "coral-like surface." The newspaper sketch of that object showed a "quilted surface."

The Hillsdale case will forever be remembered for the US Air Force's then-skeptical spokesperson Dr. J. Allen Hynek brief investigations and finding that the whole event was caused by "swamp gas." This upset the witnesses, and especially people like pilot William Van Horn, who grew up near a swamp and knew what he saw wasn't swamp gas.

The Hillsdale incident became a pivotal event in ufology, and propelled Hynek's life in new directions. It also impacted others. For example, the youthful ufologist Patrick Huyghe would go on to become a journalist and science writer, then talk of Hillsdale in his autobiographical book, 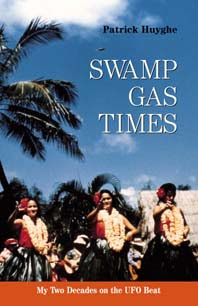 Swamp Gas Times: My Two Decades on the UFO Beat.

Does Hillsdale's California event sign another shift in the cosmos, as well?
Posted by Loren Coleman at 8:35 AM

You're not gonna believe this, gang ...