Authorities are stepping up patrols near an area of Jefferson National Forest where two VA Tech students were found slain, during this first week of school.

A man walking his dog in the forest's parking lot section of the Caldwell Fields area, Blacksburg, Virginia, early Thursday, August 27, 2009, found the bodies. They were 19-year-old David Lee Metzler of Lynchburg and his girlfriend 18-year-old Heidi Lynn Childs of Forest.

When deputies arrived they found Metzler's body sitting in his car (a 1992 blue Toyota Camry), while Childs's body was on the ground nearby. The gravel parking lot of the campground and wildlife viewing area is popular among Virginia Tech students.

A suspect has not been identified.

Metzler was a sophomore industrial and systems engineering major and Childs, a sophomore biochemistry major.

Caldwell Fields is a peaceful area away from the hustle and bustle of campus life, a hangout site for students, especially on the weekends. Caldwell Fields is 15 miles west of Mason Cove and Hanging Rock, which are on Catawba Valley Drive, and five miles NW of Lafayette, which is on Interstate 81. The area where the students were killed is about 15 miles from the VA Tech campus.

The forest is technically named the George Washington and Jefferson National Forests, consisting of two U.S. National Forests that combine to form one of the largest areas of public land in the Eastern United States. They cover 1.8 million acres (7,300 km²) of land in the Appalachian Mountains of Virginia, West Virginia, and Kentucky.

One victim's name Metzler has origins in German (Middle Rhineland), as an occupational name for a butcher, Middle High German metzeler, from Latin macellarius "dealer in meat," from macellum "stall (at a market)," "meat market."

In a statement released from the Virginia State Police, it has been learned that Childs is the daughter of a state police sergeant.

It reads in part… "Tonight, the Virginia State Police grieves with Sgt. Donald Childs and his family during this deeply difficult and painful time."

Childs, home-schooled in Abingdon, moved to Forest, Virginia, with her family about four years ago. Her father, Sgt. Donald Childs, has been a helicopter pilot with the Virginia State Police for 20 years. She had seven siblings, and fell somewhere in the middle.

Heritage Baptist Church pastor Gerald Kroll said Friday, August 28, 2009, both had been active in the church for a long time and were members of Campus Crusade for Christ.

Two years ago, on April 16, 2007, a student gunman killed 32 others and then himself. On January 21, 2009, a doctoral student beheaded a fellow student in a campus cafe in the Graduate Life Center.

As blogger Thuth has previously pointed out in his research:

The northwestern corner of Virginia Tech is located upon an old historic site called Draper’s Meadow - bordered on the south by Stroubles (Troubles?) Creek...On July 8, 1755 a group of Shawnee Indians entered the sparsely populated settlement and brutally killed five of the settlers that lived there in what eventually came to be known as the Draper’s Meadow Massacre. Draper’s Meadow became the town of Blacksburg. The incredible synch here is that one of the settlers that was killed – the oldest of the five, one Philip Barger, was decapitated by the Shawnee. They put his head in a bag and sent it to a neighbor, telling them a friend had come to visit.

Today, few at Blacksburg, Virginia's well-known university are aware of this history. The community members have their hands full dealing with current unfortunate traumatic events, of course. Nevertheless, the past is prologue to the future.


"Those who cannot remember the past are condemned to repeat it." ~ George Santayana. 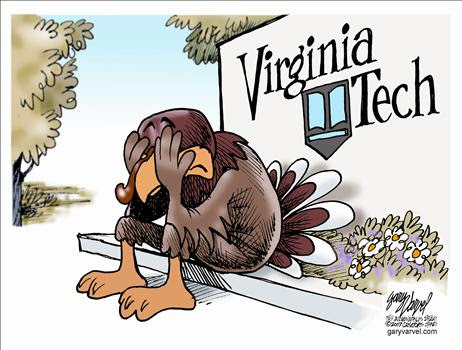 The first student to ever enroll in the Virginia Agricultural and Mechanical College (which later became VA Tech) was Addison Caldwell. Caldwell field was named for the 3 brothers who settled the area in the 18oo's.
http://tgaw.wordpress.com/2007/05/15/caldwell-fields-if-this-isnt-nice-what-is/

He lived on LaFayette st...

All this weirdness and sadness going on. With September, seems like it's going to get even weirder.

"DJ AM, a high-profile disc jockey who was as famous for his much-chronicled relationships as he was for his creative scratching and mixing on the celebrity club circuit, was found dead on Friday evening [August 28, 2009] in his apartment in Manhattan, the police said.

"The police said his body was found in his seventh-floor apartment in SoHo about 5:30 p.m. after friends had tried unsuccessfully to reach him for days. The chief police spokesman, Paul J. Browne, said the police did not suspect foul play.

"DJ AM, 36, whose real name was Adam Goldstein, was discovered face-down in his bed wearing only sweatpants, with a crack pipe and unspecified prescription drugs nearby, an official said....

"In 2006, he presided at a party during Super Bowl XL in Detroit that was attended by three generations of the Henry Ford family.

"Mr. Goldstein was seriously injured Sept. 19, in the crash of a Learjet 60 plane in Columbia, S.C. The crash killed four people and injured Travis Barker, a musician and former drummer of the group Blink-182, with whom Mr. Goldstein frequently appeared. On Friday night, throngs of friends and fans gathered outside Mr. Goldstein's apartment building at 210 Lafayette Street."

It will be recalled that that Heath Ledger was found in his fourth-floor apartment at 421 Broome Street, between Crosby and Lafayette Streets in SoHo, New York City, on the first Full Moon of 2008, on January 22 (1 + 22 = 23).

The "Fayette Factor" is background noise in all of these deaths, including the recent one at VA Tech.

Eerie. My first thought upon reading this story yesterday was to wonder whether it was the work of the Colonial Parkway Killer rearing his ugly head again. The signature sounds remarkably similar and I wouldn't discount this being the work of the same guy who was active during the 1980s.