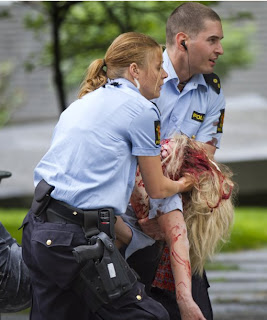 (3) A total of seven people were injured also in the Seattle area, early Sunday, July 24, 2011, including two in critical condition, after a gunman opened fire at a casino. According to KIRO-TV, the shooting happened at about 1:30 a.m. local time Sunday at the Muckleshoot Casino in Auburn, a city some 20 miles south of Seattle.

by craig on July 25, 2011
Last night two masked men in military uniform shot dead a 27 year old man in his home in Sandnes, Norway. Nowhere in the mainstream media can I [craig] find anybody wondering whether this is related to the massacre in Norway the day before – even though both were killings with guns, (very rare in Norway), and either this guy really was assassinated by soldiers, or both were carried out in false uniform. Have I [craig] turned into a crazed conspiracy theorist, or is this lack of curiosity a little bit strange?

News Alert on Monday, July 25th: The total death toll in Friday's bomb blast and shootings in Norway has been revised downward from 93 to 76, police say.
Police now say eight people died in the bombing in Oslo, up one from the earlier death toll. Authorities revised downward the number of dead in the shooting on Utoya island from 86 to 68. Police say they are still searching the island for possible victims.


Early on Friday, a person dressed as a policeman fired shots at Norway's Labour Party Youth Camp, injuring and killing several people, Norwegian state broadcaster NRK reported. There were about 700 people at the camp, NRK said. (Update: The death toll for the shootings at the camp plus the bombings was set at 93 and/or 94 on Monday before the revision downward.) 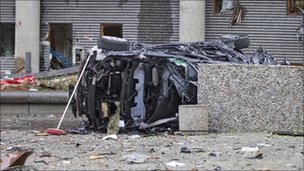 Word of the attack came after a giant explosion rocked government buildings in Oslo, Norway. NRK reported that people were confirmed dead. (The number of dead is seven for those killed in the Oslo blast.) 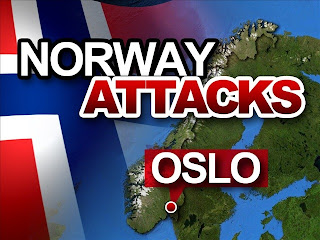 Several buildings were badly damaged, witnesses said, and the city was reeling. The cause of the blast remained unknown for some time, as no one claimed responsibility. 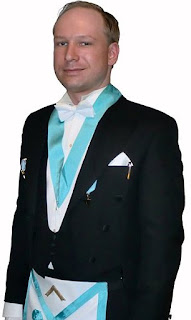 Anders Behring Breivik is the suspect, shown here wearing a Masonic apron and outfit. Is Breivik a Freemason? Indeed, it appears so. According to Norwegian newspapers, a Facebook page ascribed to Breivik showed him as a person interested in bodybuilding, conservative politics and freemasonry. Another new photograph and information has associated him with a Knights Templar group. 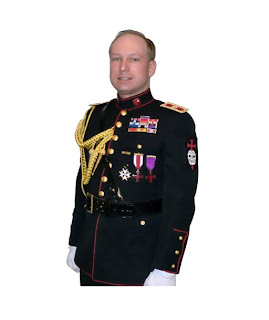 By late on Friday, Anders Behring Breivik, a 32-year-old ethnic Norwegian man, tall and blonde, was in custody, officials said, after two attacks earlier in the day that killed scores of people -- attacks police said are linked. The first attack occurred when a massive bomb erupted in the heart of Oslo; the second occurred at the ruling Labour Party's youth camp on an island outside the capital.

At least seven people were killed in Oslo, and at first only 10 were reported killed on Utoya Island (this is now said to be around 91 dead), officials said. A Labour Party member said panic broke out at the camp, with people climbing trees and jumping in a lake to avoid the gunfire.

The acting national police chief said the gun used was an automatic weapon and that undetonated explosives were found on the island after the attack.

National police chief Sveinung Sponheim told NRK that the suspected gunman's Internet postings "suggest that he has some political traits directed toward the right, and anti-Muslim views, but whether that was a motivation for the actual act remains to be seen."

Andersen said the suspect posted on websites with Christian fundamentalist tendencies. He did not describe the websites in any more details.

A police official said the suspect appears to have acted alone in both attacks, and that "it seems like this is not linked to any international terrorist organizations at all." The official spoke on condition of anonymity because that information had not been officially released by Norway's police.

"It seems it's not Islamic-terror related," the official said. "This seems like a madman's work." 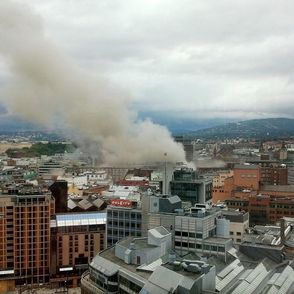 But was there a message in the madness? "He is clear on the point that he wants to explain himself," police official Roger Andresen told reporters Saturday. 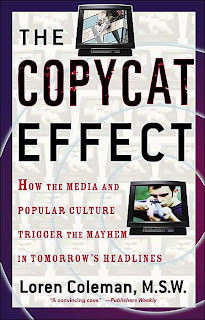 I have written extensively in The Copycat Effect (NY: Simon and Schuster, 2004) of the symbolism of dates in these acts and other underlying "messages" found in such twilight language, of course.

SMiles Lewis passes along the following confirming quote made sometime after my book appeared, about the July 11, 2006, Mumbai attacks: "The date of the attack, the 11th, may be only a coincidence, but it won't be ignored as investigators try to figure out who was behind today's deadly commuter train attacks in India. The 11th has now been chosen as an attack date in New York, Madrid and Mumbai. 'There's a lot of symbolism involved when terrorists choose their targets and the dates of their attacks,' said Jack Cloonan, a former FBI agent on the bin Laden squad who now works as an ABC News consultant."

What might be the deeper significance of today's attacks?


See the developing comments section below, for links to the historical King David Hotel attack of July 22th, and for more on the Masonic background of the suspected shooter.


Also, as I wrote about before and during the Virginia Tech shooting, there appears to be an unconscious or conscious attempt on the part of shooters to be the one with the highest "body count."


Is this incident now the largest single shooter attack with the greatest number of young people killed in a youth-oriented setting? Obviously, the number killed has been higher in bombings and in military or terrorist operations with teams of killers, but isn't this the highest number of youth killed by one person in a single event, sadly? 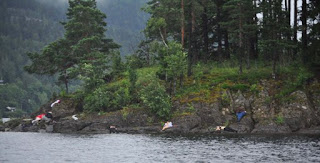 Posted by Loren Coleman at 9:55 PM

During that female soccer world cup finale game (USA-Japan), tv showed a banner held by american fans, saying "Abby is the bomb". And there's another star in the american team: Hope Solo.
There you go. The OSLO (Solo) Bomb attack was predicted.
The other attack, the Amok, was too, but I saw it several days ago in german surroundings, hence I will not get into details.
Cori, Germany

Also Today in History: The King David hotel in Jerusalem bombed by the Irgun, a Zionist extremist organization, resulting in 91 deaths in 1946.

According to news reports, the bomb attack took place at 3:30 local time -- once again, the 33 signature, especially interesting in light of the masonic picture you've posted.

There's another tragic link to a previous attack.

The Norway attack included an attack on children at a kids' camp. The OKC bombing killed a great many children in the daycare center in the Federal building.

Don't these attackers--whatever their motives--realize that attacking children just makes EVERYONE hate them?

Last news from vg.no:
They vas 2.Anders have a companion

Pekka-Eric Auvinen would have been 22 years old this year

Further to the King David Hotel bombing anniversary, Norway is linked to Middle Eastern history through the "Oslo Accords." This peace agreement, finalised in 1993, was an attempt to solve the Israel/Palestine conflict. It followed on from the Madrid Conference, which had broken new ground in negotiations.

How odd that both Oslo and Madrid have since suffered dreadful attacks.

In Israel, those who grew up since the accords are known as the "Oslo generation." You can google that term and see it widely used.

I think that the Oslo Accords era is now over, along with its chimmera of a negotiated settlement.

22 divided by 7 equals 3.14... (=Pi; sacred geometry).
The massacer happened shortly before the upcoming celtic / pagan holiday of Lughnasa (this year held on august 1st),
a thanksgiving-like celebration to honour the sun-god and celestial warrior Lugh (=lux, luz, light). As legend has it, the ancients sacrified young children on this day to reciprocate for a good grain harvest...the proverbial "children of the corn"...gods harvesting children. Breivik posed as a farmer to cover his activities.
Lughnasa reminds me of Loughner.
Anders B. Breivik allegedly had a picture of Sarah Palin on his Facebook-Site. Palin is infamous for her "Bullseye-Campaign" which is intertwined with the Loughner-Giffords-Shooting. Behring and Loughner both did a "SOLO", as Cori already mentioned.
Breivik's sick manifesto is titled "2084" - standing for the 4th centenary of the battle against the ottomans' siege of vienna, which gained final momentum on september 11, 1684.

In his twisted mind, A.B.B. named his rifle "Mjölnir" (after Thor's / Donar's hammer) and his pistol "Gungnir" (after Odin's / Wodan's magical spear).
Just like the above-mentioned deity Lugh, these two nordic gods have strong connections to warfare, dead, weather, agriculture, harvesting of crops and human sacrifice.

quote from above
"Last news from vg.no:
They vas 2.Anders have a companion"

no, ABB, the amok shooter (ABBy the bomb) was alone, but we watch this phenomenon in many amoks. Witnesses report a 2nd, sometimes even 3rd shooter, who is also differently dressed, or masked, etc., but they never find one. They must be phantoms.

Alchemical sorcery in full effect and in full view.

Knights Templar - an alchemical fraternity - whose banner was black and white to symbolize the conjuction or uniting of opposites.

The opposites uniting here are muslim and right-wing "extremists" or terrorists - 2 groups that have different goals and beliefs, but presented as both being terrorists against the state.

The OK-City bombing is conjured for mass consciousness to link these events as right-wing terror attacks, but the hidden hint, known by the subconscious, is that OK-City was gov't sponsored terror. Witness the propoganda that obscures Breivik's masonic and templar associations along with his pro-zionism while blaring his "right-wing anti-governement" and anti-immigration tenets. The masonic regalia pics are presented immediately but then flushed.

Unabom being conjured this morning as well.

The attacks in Norway were really very tragic. Tolerance for everyone all over the world is very important. That is why I would like to promote the My Fellow American Foundation, which focuses on tolerance for Muslims in America. Please watch the video and take the pledge.
http://myfellowamerican.us/