TL Reader Discovers: "You Accurately Predicted This In 2005"

Patriots' Day. The Boston Marathon. I foresaw this, it appears. 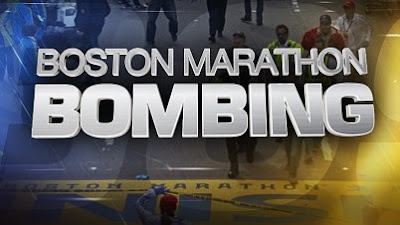 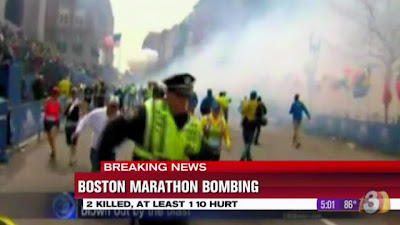 Because one of the final questions McGrath asked was about other predictions, I addressed his inquiry by posting "Ten Predictions: Ten Hits." 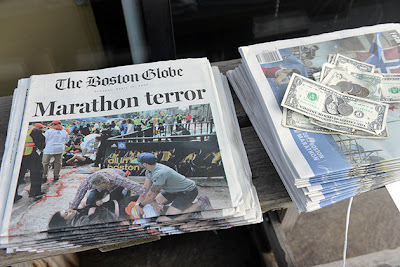 Now, as it turns out, thanks to an alert reader of this blog, I've been reminded that, indeed, I, Loren Coleman, did foretell the Patriots' Day Boston Marathon terrorist bombing - eight years ago.

I didn't go looking for this, so you can imagine my surprise when I found someone had "discovered" in my past writings that I had "predicted" the Marathon bombings. I had literally forgotten that I had written what was pointed out to me.

On April 25th, I began receiving messages from a reader, Carol J., saying "I decided to randomly browse posts from past years and see that you accurately 'predicted' this [Boston Marathon event] in 2005."

I asked her a little more about how this happened and Carol J. shared, "It was very eerie when I came across it. I felt like I wanted to read something from the past to get my mind off the present and my finger was hovering over 2006 and then it was almost like my finger felt kind of 'pulled' to 2005....For real! Synchromysticism and following intuition at its best."

What Carol J. had found was a long posting I had written on September 10, 2005. In that blog entry, I wrote of the importance of being aware of the special significance of numbers, dates, and special days, in relationship to future acts of terrorism. I penned these words:

...what about the dates? This Bush administration's little known badly named Patriot Day (9/11) may or may not be that important to al Qaeda, as I think they have their own number, date, and name game agenda. They might wish to go for the real Patriots Day, in April, in Maine, or the Patriots Day in Massachusetts, at the Boston Marathon, for example. Thousands of people there. Of course, this is not an invitation, but we have to see that we might not see what they see....

Well, then, truth be told, I live in Portland, Maine, where 9/11 all began for Mohammed Atta, who picked Flight 11, so needless to say, I'm not letting my guard down on 9/11/05. Or 11/9/05. Or 11/11 (Veteran's Day). Or on next April's Patriots Day 2006, 2007, 2008, and so forth. Atta, the leader of the operations wing of 9/11, historically, was tied into those elevens. Afterall, the first mastermind of the 1993 Twin Towers attack was Ramzi Yousef, and he used parts of Bonjinka, a plan to place bombs on 11 planes in the Phillippines, for the eventual 9/11 attacks. Yousef's test run for Bonjinka occurred on, you guessed it, another eleven, December 11, 1994. Sometime, look up the 1970 origins of the naming of the group 'Black September,' whose kidnapping of Israeli athletes attending the Munich Olympics (which was scheduled to end on September 11, 1972), ended in the death of 11 of those athletes. Certainly, 9/11 hits very close to home. And lives on. Mysteries remain that may be hidden in numbers and places.

Clearly, the combination of Patriots Day and the Boston Marathon was too tempting for the terrorists who would conduct the first major attack at a public event, post-9/11.

It was a terrible and horrible series of events in Boston on Patriots' Day. Let us wish and pray that other terrorists will not see what occurred in Boston as a roadmap for future copycat incidents. That is certainly my fear, based on what I know of behavior contagion. It does make me sad to be able to "see" this coming. I take no delight in being close in my predictions.

My hope is that someday, somewhen, predicting behavior patterning is developed to such a level that violent and fatal events can be prevented. 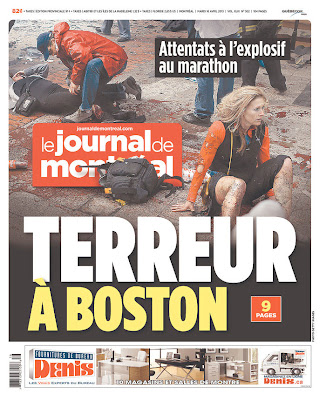 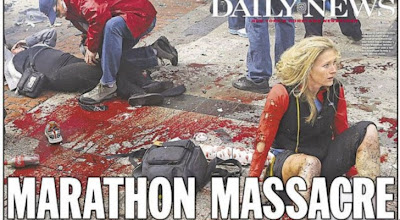 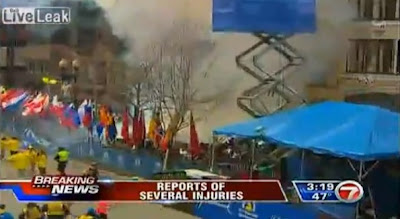 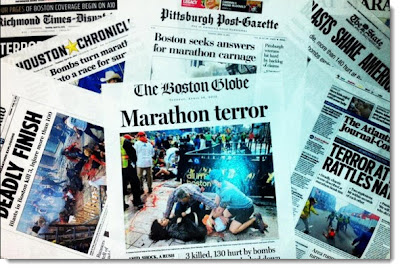 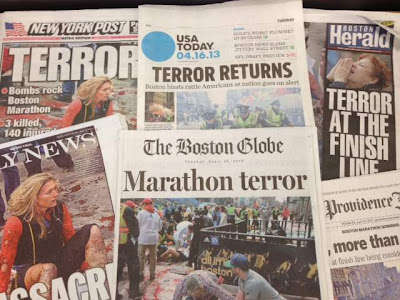 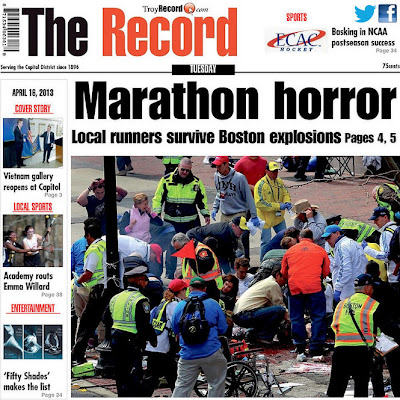 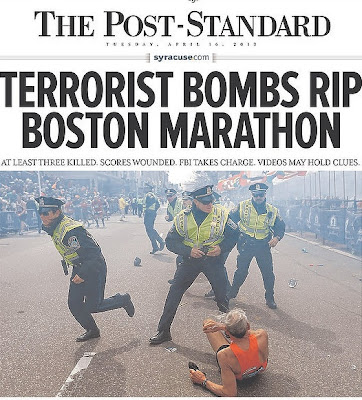 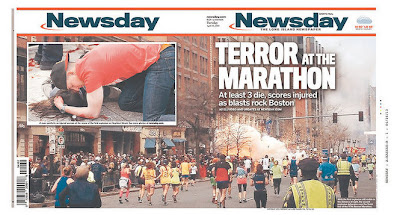 My ideas and insights about "predicting" such events are in my 2004 book,
a work that the media never wants you to read. 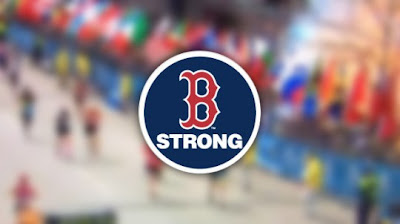 Posted by Loren Coleman at 6:43 PM

Pretty eerie call Loren.
I also find it eerie that the film "Mystic River" that was filmed in Boston and especially the liquor store scene that was shot at Costello's, a liquor store on Boylston Street in the Back Bay, next to Berklee College of Music,

mirrored in a way -
" The body of a young man pulled from a river in the US state of Rhode Island has been formally identified as the university student who was wrongly identified as a Boston Marathon bombing suspect by amateur online sleuths."

I also find it eerie that the guy who wrote "Mystic River" for the screen,Brian Helgeland
(from the Dennis Lehane novel) also wrote Tony Scott's "Man on Fire" and the current movie "42" about the baseball player Jackie Robinson.

"Man on Fire" was the movie I referred to you as in this post of mine called "COLEman SYNC."

quoting you from "The SYNC Book 2"

" I see my role as my name informs,as a "Coal"man ("COLEman"),
one of those who lit the fires on the hills along the ley lines as a
"perceiver" ...I shall give you the facts,no matter how grounded or beguiling,
and you can come to your own conclusions "

I have to say that since that post that you really have been on fire and I have to admit you are a true synchromystic in terms of all the syncro weirdness surrounding you and events.

I toast my drink to you Loren.
(raise my glass in the air)
Here's to Loren Coleman,
one of those who lights the fires on the hills along the ley lines as a perceiver.
A real "Man on Fire" in the synchrosphere of blogging.

Also a bit more synchromysticism in that post I did on you in December was I mentioned the Zoey /Zooey /Oz /Kansas connection between Zooey Deschanel and Jovian Belcher's daughter Zoey,born Sept. 11, 2012.

Today on the news they claim to have found a piece of one of the planes that allegedly crashed into the towers all those years ago,plus Zooey Deschanel was accidentally named as a suspect in the Boston bombing by a TV station in Texas -

Also in the same post that I did on you -
http://brizdazz.blogspot.com.au/2012/12/coleman-sync.html
I randomly used the 96 newspaper headline about the Liverpool tragedy which happened on the 15th April (23 years ago at the time of my post) the day the Boston Marathon would be run this year.
The owner of the Liverpool Football Club also just happens to own the Boston Red Sox baseball team as well.
http://brizdazz.blogspot.com.au/2013/04/number-96another-dark-sport-sync.html
Both the football team and baseball team are famous for their red socks.
Also a storm in Brisbane on the 24th which indirectly killed a runner in the TWILIGHT Running Festival at St.Lucia in Brisbane
could be seen in hindsight as another dark link to foretell the Boston bombing tragedy that was approaching,
(in the movie “Man on Fire” Denzel Washington wears the number 24 on his back)
as the TWILIGHT Running Festival was ruined by the eventual death of a runner.
http://brizdazz.blogspot.com.au/2013/03/the-iceman-cometh-in-march-sync.html
Liverpool held a memorial for the first time in 24 years to mark the Hillsborough tragedy and it was held on the 15th April,same day as the Boston Marathon.
http://www.youtube.com/watch?v=lK-DKzc3rmI&feature=player_embedded
It was also Jackie Robinson Day on the 15th April,where every baseball player wears the number 42 (Jackie’s #) on his back to honour the first coloured player to play in the major leagues of baseball (which is what the film “42″ is about) .
The Titanic also sunk on the 15th April,too.
April 15th was a busy day in history it seems.