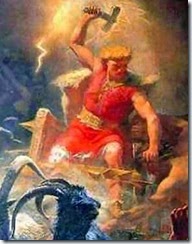 Thurston means "Thor's Stone." It is a name involved in school violence incidents since, at least, 1998. Today gives us another example.

Emergency dispatchers confirmed reports of an active shooter, a 15- or 16-year-old boy, was armed with a handgun, on campus about 7:40 a.m., on Monday, April 27, 2015. In the Year of the Ram, school violence visited another Thurston. 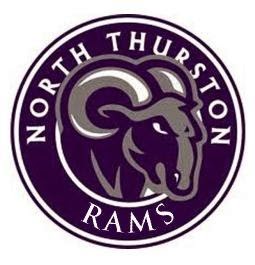 A gunman at North Thurston High School, 600 Sleater Kinney Road NE, Lacey, Washington State, near Seattle, fired, at least, two shots in a common area, and then was tackled by staff members, according to the school district. No one was hurt.
The school is in lockdown. Lacey police said the gunman is in custody. 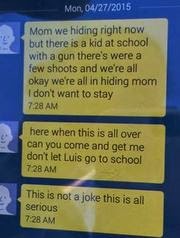 A parent shows the text message she got from her child at North Thurston High School in Lacey, Wash., April 27, 2015. (Photo: KING 5 News)

North Thurston High School, located in the North Thurston Public Schools District in Lacey, Washington, is a comprehensive high school, which first opened in 1955. North Thurston serves a portion of Lacey and northeast Thurston County. The school is accredited by the Washington State Superintendent of Public Instruction. The principal is Tyler Roach.

This school has been a focus of concern in the past. According to the October 24, 2006, issue of the Mason County Daily News, a North Thurston School District teacher from Shelton, Washinton, was accused of bringing a gun onto school grounds and had to resign. The North Thurston School Board accepted the resignation of Mary Catherine Roe, a language arts teacher at Nisqually Middle School.

It will be recalled that on May 21, 1998, Kip Kinkel brought school violence to his fellow students at Thurston High School.

On that day, in Springfield, Oregon, two students were killed, and 22 others were wounded in the cafeteria at Thurston High School by 15-year-old Kipland "Kip" Kinkel. His parents were later found dead at home. Kinkel had brought three weapons to the high school, a .22 caliber rifle, a .22 caliber handgun, and a 9mm Glock semi-automatic pistol.

Kinkel was convicted of shooting his parents, William, 59, and Faith, 57, in their Springfield home and, the next day, opening fire in the Thurston High School cafeteria, wounding 25 students and killing Mikael Nickolauson*, 17, and Ben Walker, 16. 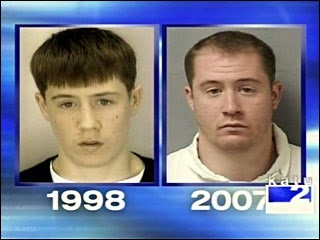 Kinkel was sentenced to 112 years in prison in the Thurston shootings. His case was a precusor to the Columbine High School massacre of April 20, 1999.
My further investigations revealed that two other school shootings happened on that date in 1998.

From my book, The Copycat Effect, following my discussion of the Springfield, Oregon shooting, I wrote:


On the same day, May 21, 1998, 200 miles due north, at the end of the school day, Miles Fox, 15, a student of Onalaska High School, Onalaska, Washington, took a young woman hostage from his bus to his home, and died by suicide from a shot to his head. As the story aired on radio and television, Ricardo Martin, 15, shot himself with a .38 caliber pistol and died on the campus of Rialto High School, in Rialto, California.

The events happening earlier on May 21, in Springfield, Oregon, had been all over the radio, Internet, and news channels constantly, all day.

Thurston has had ripple effects through other school violence.

The Gresham, Oregon, Tuesday, April 10, 2011, school shooting was triggered by the shooter's viewing of the recent National Geographic Channel's The Final Report: Columbine.

The shooter Chad Antonio Escobedo had watched the Columbine documentary and decided April 7 that he would do a shooting at his school because he was angry. The incident took place at Springwater Trail High School in a Portland suburb. Coincidentally, the principal at Springwater — Larry Bentz — was principal at Thurston High School in Springfield, when the Kip Kinkel shooting occurred in 1998.

The Thurston name game is strong in these school violence events. Thurston is an English-language surname. It appears to have originated from the Old Norse personal name Þórsteinn. This name is derived from the Old Norse elements Þórr ("Thor," the Scandinavian thunder god) and steinn ("stone," "rock").

As an aside, the name game kicks into high gear in a historical baseball-Hawaiian sidetrip, for Mr. Baseball writes:


Alexander Cartwright died on July 12, 1892, from blood poisoning from a boil on his neck. The Hawaiian monarchy was overthrown six months later on January 17, 1893. A group of Americans in Honolulu formed to request of President Benjamin Harrison that Hawaii be annexed to the United States. The president was in favor. The individual leading the cause for annexation was Lorrin Thurston. Coincidentally, Thurston had played baseball at Punahou School at the same time as Alexander III and Bruce Cartwright Sr.

Thurston, as a surname, is tied to powerful political and historical individuals in Hawaii, Oregon, Washington State, and elsewhere. 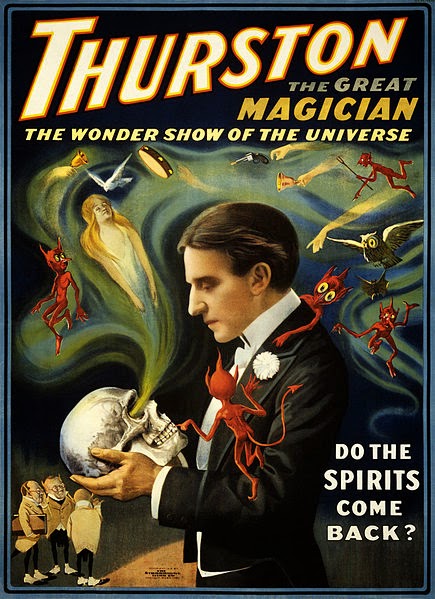 Howard Thurston (July 20, 1869 – April 13, 1936) was a stage magician from Columbus, Ohio, United States. He was the most famous magician of his time, and his traveling magic show was the biggest one of all; it was so large that it needed eight train cars to transport his road show.

In fiction, the character Francis Wayland Thurston was the narrator of The Call of Cthulhu. 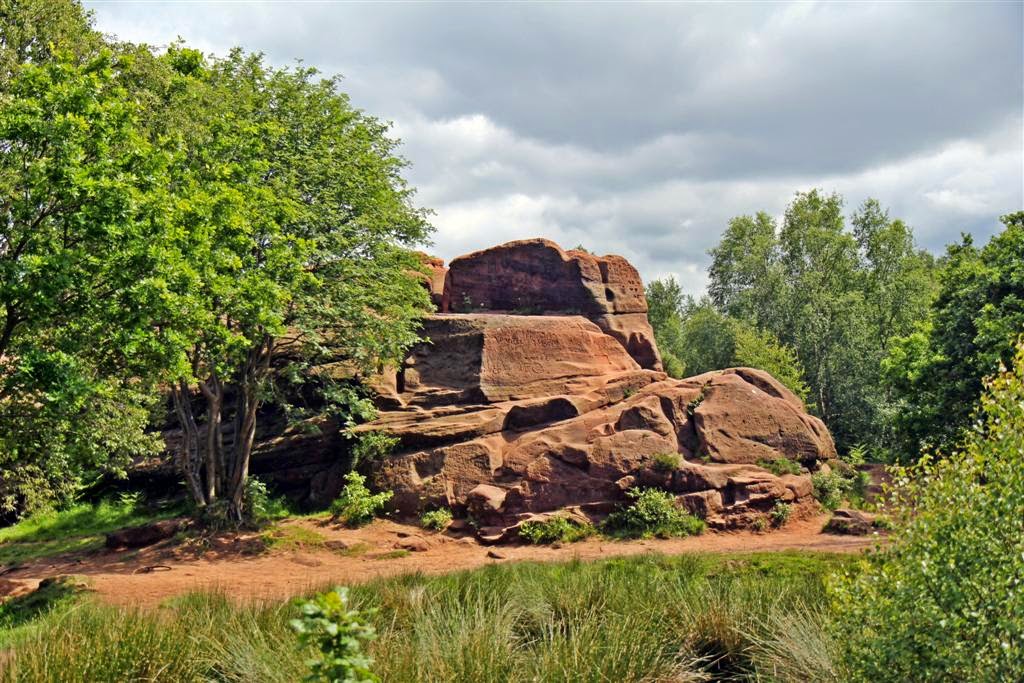 Thurstaston Hill is the location of Thor's Stone (shown), a large sandstone outcrop and a place of romantic legend. In the 19th century it was supposed that early Viking settlers may have held religious ceremonies here. A visit to the site by members of the British Archaeological Association in 1888 heard an account by Rev. A. E. P. Gray, rector of Wallasey, that the "Thor Stone" was also known in the locality as "Fair Maiden's Hall" and that children were "in the habit of coming once a year to dance around the stone". This part of Wirral was certainly part of a Norse colony centred on Thingwall in the 10th and 11th centuries. However, geologists and historians now think that the rock is a natural formation similar to a tor, arising from periglacial weathering of the sandstone, which was later exploited by quarrymen in the 18th and 19th centuries. Source.

As far as locations, several sites are named Thurston, and linked to people of that name:

April 27, 1911: Manhattan, Kansas, During a school play rehearsal, a revolver was accidentally loaded by a boy who tried to shoot a bird with it the day before. When the girl was to use the firearm as written in the script, she picked it up, then laid it down saying she was afraid of the old thing. The Teacher, Miss Reedy then grabbed the gun and said there was no need for alarm and pointed it at the girl, Pearl Reedy, 18 years old, and squeezed the trigger. The bullet lodged near her heart fatally wounding her.

April 27, 1936: Lincoln, Nebraska, Prof. John Weller shot and wounded Prof. Harry Kurz in a corridor of the University of Nebraska, apparently because of his impending dismissal at the end of the semester. After shooting Kurz Weller tried to escape, but was surrounded by police on the campus, whereupon he killed himself with a shot in the chest.

April 27, 1966: Bay Shore, New York, Teacher John S. Lane, 48, was shot and fatally wounded when he tried to stop 16-year-old student James Arthur Frampton, who was walking through the halls of Bay Shore Senior High School with a shotgun, searching for some boys with whom he had an argument earlier that day. Lane died of his wounds on June 13, 1966.

With the fatal crossbow incident in Spain on the Columbine anniversary, a school violence threat in Columbia, South Columbia, also on April 20th, and now this event, should we watch out during May 2015, for other school incidents?

__________
*In terms of the name game, Bill Grimstad has been alerting his correspondents to an especially active "power name" in recent years: Nicholas. Please see the scholarly discussion of this name, here.
Posted by Loren Coleman at 1:17 PM

Thurston School is on Sleater Kinney Rd. The rock & roll band of same name have a song titled "How to Play Dead". I'm sure there are more relative titles in their discography. https://www.youtube.com/watch?v=J-JAett6nSc

The Statue of Liberty is a version of the goddess Columbia, and there was a bomb threat there on April 24th. Also, the current Baltimore riots are centered around Mondawmin Mall in the nearby Columbia, MD area.

What does Jim Brandon/William Grimstad have to say about "Nicholas"?

Re Nicholas: Please see the scholarly discussion of this name, here,

"One man ran naked through a Florida neighborhood, tried to have sex with a tree and told police he was the mythical god Thor."