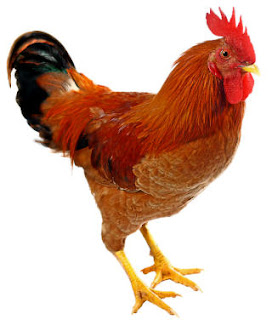 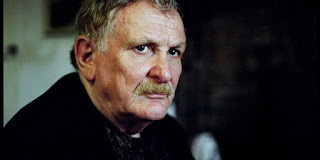 "Cox's delicate films have been pockmarked with life's uncertainty. Loneliness within relationships is a staple of the Cox oeuvre, too," said his filmmaker collaborator and friend David Wenham.

Paul Cox was born Paulus Henrique Benedictus Cox on April 16, 1940, in Venlo, Limburg, the Netherlands, the son of Else (née Kuminack), a native of Germany, and Wim Cox, a documentary film producer. He is remembered for his documentaries like Vincent (1987), and his personal, lonely narrative fiction films, which in recent years, have mirrored his own challenges with a liver transplant. 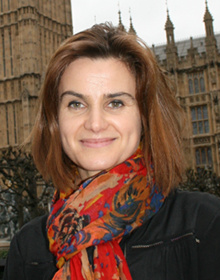 Helen Joanne "Jo" Cox (née Leadbetter) was born on 22 June 1974 in Batley, West Yorkshire, England, and raised in Heckmondwike. Her mother was a school secretary while her father worked in a toothpaste and hairspray factory. She was educated at Heckmondwike Grammar School, a state grammar school, where she was head girl. During summers, she worked packing toothpaste.

On June 16, 2016, Jo Cox was shot and stabbed multiple times in Birstall, West Yorkshire, England, shortly before she was due to hold a constituency meeting. A 52-year-old man, Thomas Mair, shouted "Britain First!" during the attack. Thomas Alexander "Tommy" Mair (Mair meaning "Mary") was born August 12, 1963 in Kilmarnock, Scotland. He was arrested in connection with Cox's death and subsequently charged with murder and other offenses. Mair, charged in the killing of Jo Cox, stated his name as "Death to traitors, freedom for Britain" to UK Court.


The claims that Mair had allegedly bought a number of manuals from an extremist group in the US was uncovered by the Southern Poverty Law Centre (SPLC), a civil rights organization in the US. It said Mair made the purchases between 1999 and 2003. Receipts for items also included Ich Kämpfe, an illustrated handbook issued to members of the Nazi party in 1942.

Cox appears to derive from the hills found in Carmarthenshire, Wales, where Cox may have been a topographic name for a man "from the red hills." The meaning appears derived from cock or coch, and means "from the hills," or from cocc, which means "the little," or derived from coch, meaning "the Red." Other forms point to the English, from Cocke in any the senses described + the suffix -s denoting "son of" or "servant of" Irish (Ulster), mistranslation of Mac Con Coille ("son of Cú Choille," a personal name meaning "hound of the wood"), as if formed with coileach "cock," "rooster," the bird that heralds the dawn!

The recent wave of violence in Orlando began, you will recall, when singer Christina Grimmie, 22, who gained fame as a contestant on television singing contest The Voice, was hit by three shots at a concert in Orlando, Florida, on Friday, June 10, and died on June 11, 2016. (For twilight details, see here.) 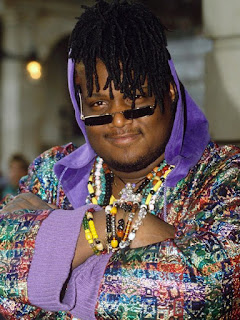 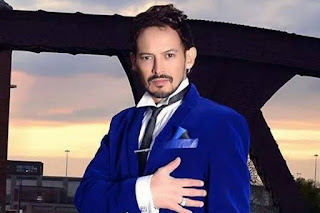 On Saturday, June 18, 2016, another former contestant on the singing contest The Voice, the Mexican version, died after earlier being shot in Illinois. The death on Saturday of Alejandro "Jano" Fuentes, 45, was confirmed by the Cook County Medical Examiner's Office. The singer was shot three times in the head late Thursday in an ambush outside the Tras Bambalinas School, his performing arts studio on Chicago's southwest side.

Grimmie had been shot three times in the head too.

Jano is a form of John, "the grace or mercy of Jehovah," "favor of the Lord."

Fuentes is a Spanish surname meaning, "a spring," "a well," "a fountain." 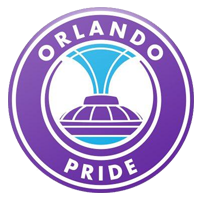 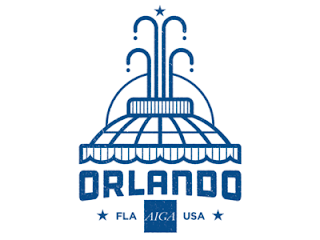 Various images of Orlando's logo are based on their famed Lake Eola Park fountain.

Yesterday, I wrote of the potential for another Red Dawn on June 20th. 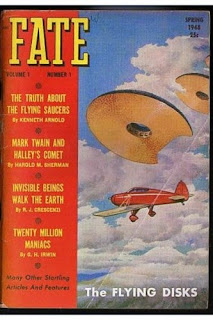 Less we forget, St. John's Day/Midsummer's Day revisits us again on June 24th. I have written extensively about St. John's Day associations in 2015, and 2012. Being the anniversary of the "first" sighting in the "modern era of flying saucers," the date of June 24th is especially linked to the "Deaths of Ufologists," including a loss as recently as 2015.

On Thursday, June 16, 2016 (6.16.16), Marco Rubio ("Mars Red") took his first flight on Air Force One with President Obama to Orlando, to meet the families of the victims of the Pulse shootings.

A red greeting in... 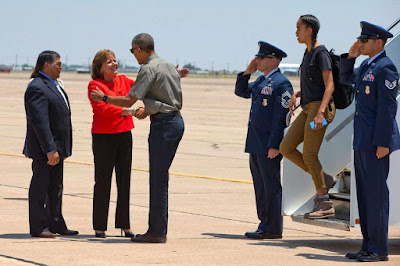 Okay, over the weekend, President Obama was in Roswell, New Mexico, and Donald Trump held a fundraising meeting in Barry Goldwater's old Arizona home, ''Be-nun-i-kin,'' which is Navajo for ''house on top of a hill." 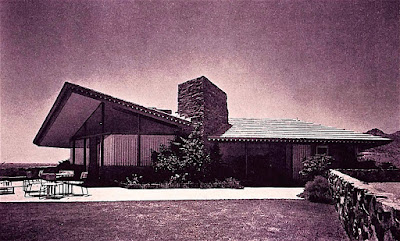 Trump goes to dedicate a golf course in Scotland, leaving on June 22, and opening the course on the 24th.

Certainly, my readers are feeling "something" in the air too:

...the release date of Helen Reddy’s 1973 cover of Delta Dawn? The song popped into my head earlier, and the combination of "Dawn" in the title and "Red" in the recording artist’s name strikes me as being possibly significant, especially since the recent Red Dawn shooting rampage at Orlando’s Pulse nightclub on the day of the Tony Awards drew attention to Reddy’s soft rock contemporaries Tony Orlando and Dawn. If the release date happens to be June 20, your prediction of a Red Dawn event on June 20 of this year would be reinforced. An event related to the word “Delta,” like a crash or hijacking of a Delta jet, might even be expected.

Mysteriously, no exact release date is to be found during our mutual search for Reddy's version of Delta Dawn, other than "June 1973."

But this morning, Enki writes, a film studies associate found the date: "Delta Dawn was released as the first single from the album on June 11, 1973, debuted on Billboard's Hot 100 later that month, in the issue of the magazine dated June 23, and enjoyed 20 weeks there, one of which was at number one."

...some things have jumped out at me regarding the Swiss tunnel ceremony leading up to the events in Orlando. The date 6.12.2016 can be summed up as 6.12.18 or the succession of 666 which no matter how you cut it the date eventually breaks down to a 9 root number for the date. I think the combination of the luciferin celebration on 6.1.2016 with a 7 root leading up to the George H W Bush Birthday of the Orlando Massacre (ritual blood sacrifice) Orlando has deep roots with Disney's love affair with the lore of the evil deity. Also I unfortunately think that the child who was snatched by an Alligator is also symbolic and connects to the tunnel ceremony (path to the grave). I would assume 6/21/2016 being the next succession of the root 9 will be a continuation of this "summoning" Regardless of my numerical hunches about the dates, I think the root problem here is that these massacres are not put into perspective for what they really are a continuation of. Anyway, I'm not drawing any conclusions but I think your summation of the Solstice Full Moon being a volatile ticking bomb are worrisome.

Joe also mentioned the Wounded Knee Massacre, which was on my mind heavily, as well, yesterday, as I pondered the Orlando events and their Sebastian-Fort Pierce links to the Boston Marathon, during my time at the Portland Pride Parade with my wife Jenny. 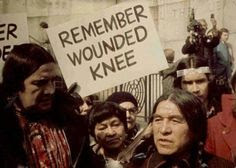 I am having strong angry First Peoples thoughts, of late, for a variety of reasons. 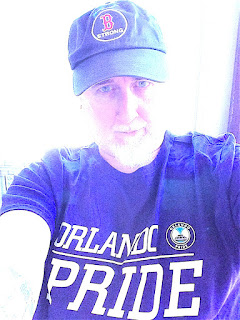 Just in - Chris Kraska sent this my way, after reading the above: "Loren's post reminded me of this tidbit about the Orlando shooting victim in the conspiracy theory story" from the New York Daily News: 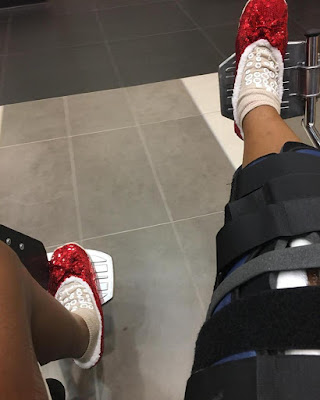 The photo was snapped on the day Carter [a Pulse shooting survivor] was discharged from the hospital. She wore a pair of red, rhinestone “Dorothy” slippers on her feet and wrote in the pic's caption that there was “No place like home.”

Villarreal, after reading the above, sent this along:


Ritchie Blackmore has started touring again with "Rainbow" in Germany, as of 6/16/16. He opened the show with Dorothy saying, "We're not in Kansas anymore." And, "There's no place like home."
I also saw a promo poster for Rainbow with a yellow brick road.
Ties into your post today about the ruby slippers.
Ritchie has been gone from rock for 19 years.

I expect a weird week ahead. It feels like the purple rain has moved on to be another red dawn.

And the filmmaker Alex Cox has been coming up in sync conversation as well. "Repo Man" and "Walker," in particular. Alien link with Repo Man and Roswell ...

With regard to "First Nations peoples", all of these events could well be omens leading up to what the Hopi call the "end of the fourth world", which their prophecies state will coincide with the destruction of much of the world by war.
The main deity/kachina of the fourth world, Maasau'u, is associated with the color red and the element of fire.

Great post, Loren. Red Dawn is not going away. From my nautical days, "Red sky at morning, sailor take warning."