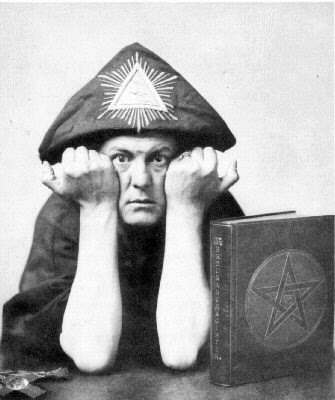 This event exudes elements requiring some in-depth twilight language decoding. First there are the overt names that catch one's attention: "King" (as in the county), "Queen Anne" (being the apartment complex), and "Gross" (the prosecutor's graphic moniker which vividly describes the scene itself).

In almost a revelation of the process, even "an unidentified language" is found in this tale.

More twilight-dwelling, perhaps, but needless to say much more covertly, there is this ritual sacrifice's suspect with the given name of "Oumar Lam." It is a name that allows various anagrams, of course, but it should be mentioned that one is "Amoral MU," alluding to the vanished continent, located in the Pacific Ocean but now, like Atlantis and Lemuria, said to have sunk beneath the sea.

More significantly, researcher Richard Hendricks, whom I fully credit for passing word of this incident to me, notes the following:

"Between January & March, 1918, Aleister Crowley performed a series of magickal rituals, the Amalantrah Workings, while in New York. One of his goals during this series of rituals was to bring an intelligence into physical manifestation. He claimed he did, and drew a celebrated portrait of the being he said he conjured. That intelligence, of course, was Lam, whose resemblance to alien greys and other paranormal entities has been noted since. At any rate, the story below caught my eye: rituals; chanting; the man 'yelling in an unidentified language.' his last name, Lam." 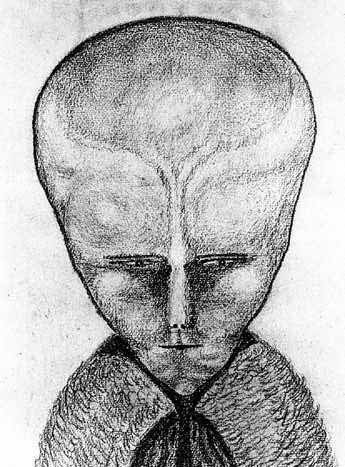 It is quite easy to find more about the overlap between the facial features of "Lam" and the "greys," if you wish, e.g. here and here.

But for the moment, however, merely read the following, which took place this week, kindly shared by Mr. Hendricks:

According to police, Oumar Lam's 26-year-old girlfriend arrived at their Queen Anne apartment Sunday to find him lying naked on a couch near a candle-lit altar. The woman told police she was seated on a bed when Lam attacked her from behind, pulling a pillowcase over her head and attempting to suffocate her.

Pulling her head back, Lam, 31, allegedly sliced the woman's throat while yelling in an unidentified language, according to court documents. She told police she attempted to break away from him as he pulled her toward the altar, at which he had apparently been praying for hours before her arrival.

Police assert that Lam continued stabbing her during the struggle, cutting her chest, back and shoulder before she was able to dial 911. The woman, police said in court documents, "was extremely fearful that Lam was trying to kill her as part of a sacrifice."

The woman told police he was ranting to himself throughout the attack.

"Die, die and go alone," Lam said repeatedly, according to police reports. "You have to go by yourself."

The woman fled the apartment, pursued by a still-nude Lam, according to police. Lam dragged her back to the apartment.

Weakened from blood loss, the woman was still able to rush to the door when officers knocked. According to police, Lam continued to chant when confronted by officers.

On Wednesday, prosecutors filed a first-degree assault charges against Lam, with sentencing enhancements for domestic violence and the use of a deadly weapon. Requesting that bail be set at $1 million in the attack, Deputy Prosecutor David Gross described the incident in court documents as a "vicious attack (that) shows that the defendant is an immeasurable threat to the community."

The woman underwent emergency surgery at Harborview Medical Center after the incident and is expected to survive.

Bail has not been set in the case because Lam, who remains in the King County Jail, has refused to attend two hearings. He is scheduled to be arraigned Feb. 11 and faces 10 to 13 years in prison if convicted.

Whoa! That's something else.

Interesting that it took place in Seattle...which is where Amanda Knox was from.

Knox was one of the two who carried out the supposed sexual/sacrificial ritual on Meredith Kercher.

There was a third party involved in the Kercher case: Rudy Hermann-Guede, presently serving thirty years in an Italian jail. (To be pedantic about it.)

This Fortean Pinball Machine shows no sign of tilting just yet. And Crowley, the Pinball Wizard.

Well, I think the unknown language part is probably because he's from another country. Nothing mystical or mysterious about that.

And for one of the other commenters to imply that there is some type of connection between Amanda Knox and nut trying to kill his girlfriend - is ridiculous.

1) Lam grabbed his girlfriend and attacked her with a KITCHEN KNIFE. This is the same description of the weapon used in the Virginia case.

2) He grabbed her hair, pulled her head back and cut her throat, with the KITCHEN KNIFE. This is the exact same thing that happened in Virginia. Lam was trying to behead her.

3)"Die and go alone" is a quote from the Ramayana - you will find this interesting:

I am the demon warrior Indajit, hard to see. I fight invisibly, hidden by enchantment from your sight. I attack behind the wild winds of evil thought; I put out many lights left unguarded. I know you, and good deeds done in life are your only shield when you must DIE AND GO ALONE past me to another world.

This is of particular importance because the Ramayana has partly to do with how a KING should act. This took place in the Country of Kings and is particularly timely because we just witnessed a King Kill Ritual with the establishment of a new set of Royals here in the US.

Queen Anne is also important. Look her up in Wikipedia and see how she is a Uniter like Obamessiah. If she is the queen in this story (Kings County being the King), she (the uniter) has been abducted from us, like Sita in the Ramayana.

Finally, who is the sacrifical Lamb in this story, the girl friend who will survive? or Lam who had been erased?

Black Nyx's comment about an "unknown language" uses imprecise language itself and misquotes the article.

The incident details an "unidentified language" being spoken. They have two different connotations.

Also, it is logical that if this woman was Lam's "girlfriend," even if she did not understand his language of origin, she probably would recognize something he was saying in that tongue as a known language she'd heard versus an "unidentified language" she was not use to hearing from him.

Loren, are you, by chance, aware of the Fortean Times article from a few years back that makes a fairly decent attempt at debunking the link between Crowley's drawing of Lam and the little gray alien types?

This is a very good article referring to grays & Lam, written by Richelle Hawks.

I discuss the Fortean Times piece here and the article is online here.

Emperor, thanks for the links. You saved me much typing. It has taken me a few days to find the article in the book muddle that is my house, but I was determined to give it a go.
It has always bugged me that everyone who subscribes to the Crowley/Alien story uses the cropped photo as "evidence."

Such behavior betrays the same bias that Forteans accuse the mainstream of having.

& while I'm not a Crowleyite, his status as all purpose boogie-man just seems silly.

Yes, most of the Lam = alien idea comes from Kenneth Grant not Crowley (who doesn't seem to have said anything definitive on this) - not that it necessarily makes the concept any less "powerful" in some ways (as it may all be about belief).

The English translation of Judge Massei's sentencing report can be downloaded from here: