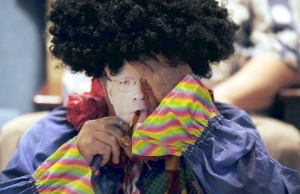 The name "Bell" is one that often is found in twilight language material. Add in a clown, and this is worthy of our attention.
There is news today from Bell, California.
An activist who often criticizes government officials while wearing a clown suit could get life in prison for allegedly threatening the Bell city clerk, reports KABC and the Los Angeles Times.
Edwin Thomas Snell is accused of making threats at a recent Bell City Council meeting. Because he has two previous felony convictions, a judge could give the so-called "Clown-suit Activist" life in prison under California's "three-strikes" law.
Sheriff's spokesman Steve Whitmore said a Bell City Council member, whom he did not name, said Snell made threats directed at a staff member during a recent council meeting.
Prosecutors said the threat was directed at Bell city clerk Rebecca Valdez.
A spokeswoman for the Los Angeles County district attorney's office said Snell would be arraigned on the criminal threats charge this week in Superior Court in Downey. The case against Snell, who has two previous felony convictions, was filed as a third-strike case that could potentially bring life in prison.
But Sandi Gibbons, spokeswoman for D.A. Steve Cooley, said on October 20th that under the district attorney's policy, which sets a high bar for any case that could bring a life sentence, the case will probably be handled as though this were Snell's second strike. She said the charge grew out of a threat related to a public records act request.
Snell, known as the "Clown-suit Activist" because he wears the costume to government meetings across the state, often disparages public officials during public comment periods.
But authorities said they there was little humor in his alleged run-in in Bell, which has been rocked by scandals over high salaries and alleged corruption.
"Clown suit or no clown suit, some things aren't funny," Whitmore said.

Snell is well-known for his governmental harassment appearances in California. For example, Edwin Thomas Snell, 63, of Apple Valley, is shown at top in 2009, in clown regalia, with a Bill Postmus mask, complete with crack pipe, prior to addressing the San Bernardino County Board of Supervisors in San Bernardino. He was photographed during the Board's special meeting on January 21, 2009, to discuss options for removing Bill Postmus from the Assessor's Office. (Gabriel Luis Acosta / The Sun Staff Photographer)
Posted by Loren Coleman at 6:54 AM