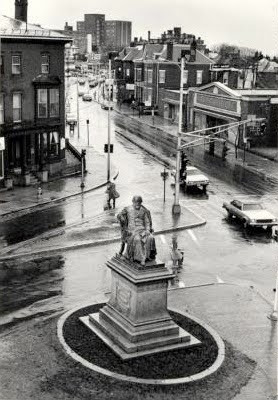 The Portland Daily Sun has followed up with an intriguing editorial look at recent events...based upon research you first saw here....

Even in a somewhat experience-hardened newsroom, Wednesday's news that somebody had set themselves on fire at Longfellow Square was a shock.

The man, who was identified yesterday as David Parker, 24, of Portland, reportedly soaked himself with gasoline in his nearby apartment, walked over to the Longfellow statue and ignited the fuel. He has reportedly been transferred to a Boston burn center.

But the ripple effect from the event continues, with police urging witnesses to seek help if they need it. One local property manager noted that witnessing the man ablaze "is going to stay with me for awhile."

In the midst of the community conversation, some odd facts were emerging. They have, frankly, nothing to do with the event except of course ... well, judge for yourself.

Now, regular readers know that Loren Coleman is no stranger to our pages or out-of-ordinary. He's been in this and other papers and newscasts as owner of the International Cryptozoology Museum on Congress Street — near Longfellow Square.

But Coleman is also a suicide prevention researcher and author, and his most recent book includes a section about "suicide self-immolation." The book, "The Copycat Effect," was published in 2004 by Simon and Schuster.

He noted a couple of oddities:

That means Wednesday was the 122nd anniversary of the statue's unveiling.

(2) Longfellow's second wife, Frances Appleton, died in 1861 after sustaining burns from her dress catching fire.
Random enough by any measure, but in the wake of a freak-out, it's also stuff that takes on eerie near-meaning.

Perhaps more to the point is the subtitle to the Coleman book: "How the Media and Popular Culture Trigger the Mayhem in Tomorrow's Headlines."

Coleman makes the oft-noted point that people seem to imitate what they've seen. He also takes some aim at media for the "if it bleeds, it leads."

Certainly there is ample evidence that suicide can bring suicide, and some of the better research is collected in the famous best-seller by Malcolm Gladwell, "The Tipping Point." So should we be concerned that the presumed suicide attempt at Longfellow Square, being so dramatic, might trigger copy-cat attempts?

By extension, does that mean we should not report on such things?

It's not acceptable in today's media environment, and casual media observers might doubt the industry's ability to make such efforts. If you're among those who think that sensationalism will always win, then two examples quickly prove you wrong.

Professional news organizations almost never disclose the name of a sexual assault victim, and we routinely do not publish the names of minors charged with crimes. So universal is this tradition that many people assume there are laws requiring the omissions — there are not.

News folks are not in the same league as police officers and other first responders when it comes to handling such things. Myself, I was once a coroner's photographer (well, a backup for when the real photographer was not available), and that was gory duty. But still, the despair one associates with setting yourself on fire is unsettling.

Hopefully, this is not going to create copycat activity. And hey, maybe even this column is "wrong."

So, what do you think? And if you e-mail an answer, please indicate if you want it published.

And, yes, there is irony in that request.

Curtis Robinson is editor of The Portland Daily Sun. Contact him at curtis@portlanddailysun.me

Have you heard or seen any follow up to this? I work in offices in Longfellow Square (next to the Daily Sun actually) and at strange times the screams still echo with me.

Did he pass away?

Hi, It was My Cousin that lit himself on fire on september 29th 2010. I am not giving out a lot of information, but I just wanted to say he did not pass away and he is slowly getting better Thank you for your concern.