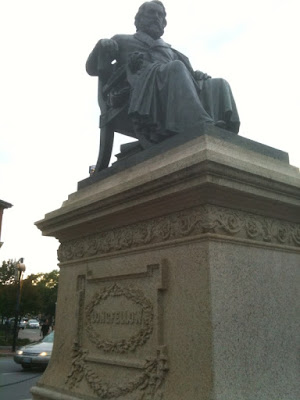 BREAKING NEWS: On Wednesday, September 29, 2010, in Portland, Maine, at Longfellow Square, according to eyewitness accounts, a lone man, covered in gasoline, set himself on fire beside the statue of poet Henry Wadsworth Longfellow. The individual ran screaming out into the intersection of State Street and Congress Street and then fell to the ground. Emergency crews and police rushed to the scene as immolation sourced smoke filled the air.


Law enforcement officers are investigating, at this time. Eyewitnesses described to me that the individual was in his early 20s, had a small beard or goatee, and was Caucasian. One person who talked to him said the person repeated over and over, "Just let me die."

Several strange things of interest to twilight language students are developing with this event. Longfellow's wife died in a fire. And the the Henry Wadsworth Longfellow statue was unveiled in Portland, Maine, on September 29, 1888, according to a confirmation article published in the Boston Daily Globe. (Thanks to Robert Schneck, for the heads up on these bits of info.) 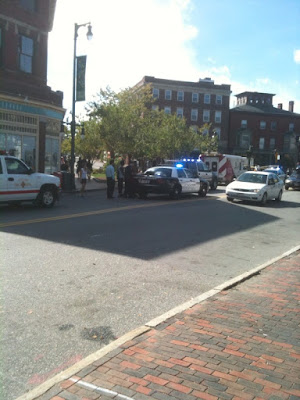 The Portland Press Herald has this information:

PORTLAND - A man set himself on fire in Longfellow Square shortly after noon today.

Police say the man apparently doused himself with gasoline in his second-floor apartment at 675 Congress St. He then walked across the street to the statue of Henry Wadsworth Longfellow and ignited himself with a lighter, police said.

Robert Michael Rodriguez was one of the first on the scene, after someone came rushing into a nearby store, yelling for someone to call 911.

"I threw myself on the flames," Rodriguez said, describing flames that were shoulder high, even as the young man lay on the ground. As he and two other bystanders struggled to extinguish the flames, Rodriguez said he held the man's hand. "I wanted him to have hope."

The man was speaking clearly as rescue workers arrived to treat him, but fire officials said serious burns can gradually compromise a person's system. His burns were serious, but police had no immediate information about his condition.

Rescue crews responded. He was taken to Maine Medical Center and his condition is unknown.

By the time the fire was extinguished the man had burns covering most of his body from the chin down, police said.

Police said it appears to be a suicide attempt. There was no political statement associated with the self-immolation.

The Portland Daily Sun has this update, for Thursday, September 30, 2010.

Robert Schneck passes on this significant historical footnote along: ‎

On July 9, 1861, tragedy again tormented Longfellow when his wife died in a fire at age 44. She and her two youngest daughters, aged five and seven, were in the library. While melting wax to seal envelopes containing cuttings of her children’s hair, Fanny dropped a match onto her dress. Longfellow tried to rescue his wife by smothering the flames with a rug only to receive terrible burns on his hands and face. Since shaving became difficult due to scars from the fire, Longfellow grew a beard. Deeply depressed, Longfellow immersed himself in translating Dante into English and returned to Europe. 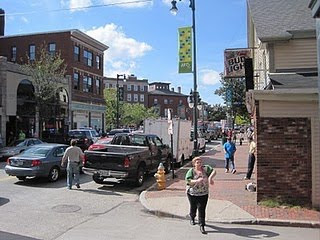 Emergency vehicles and traffic swarm around the scene, just before 12:30pm. Michelle Souliere Photo.
Posted by Loren Coleman at 12:47 PM

Good post ....(but) off topic, I'm curious to learn your take on two recent shootings- the Austin student who ran around with the AK, and today(?) the Nebraska medical college shoot-up. Two similar shootings- will the third one happen soon?

It must be true that when thinking about harming innocent bystanders, to express oneself and ones rage.... seeing somebody else commit a similar act... must propel the hapless perp along. Why? Is it a sense of a strange comraderie with the prior rampager....a sense of ,"Well, I'm not alone after all"...or just too much prozac, twinkies video games, and a culture with broken homes, endless violent images, and endless real life wars? To what degree is violence 'normal,' if its everywhere?

Thanks for showing the statue- I didn't know the writer I loved so much as a child was honored there. I hope the burn victim/family can cope, Im sorry for their pain.

Probably it signifies nothing, but some of us were snickering the other day over the news that 'Bishop' Long, the one from Atlanta who's been in the news of late, referred to the male students in his private school as 'Longfellows'. That's what popped into my mind when I heard this.

September 29, 1888 (well, actually very early morning on the 30th) was also the date of the "Double Event" in the Jack the Ripper case.

Another recent self-immolation was from earlier this year in the other Portland (Oregon) - http://www.oregonlive.com/news/index.ssf/2010/01/man_apparently_tries_to_burn_h.html

Another self-immolation from Portland, this time the one in Oregon - http://www.oregonlive.com/news/index.ssf/2010/01/man_apparently_tries_to_burn_h.html . This one dates from January of this year.

"A thought often makes us hotter than a fire"- HWL -sv