A Final Word on Jerry Smith
By Kenn Thomas

At the ARC conference recently in Bath, England I combined the lectures I have been doing on Wilhelm Reich and the Maury Island JFK case into one, entitled “Parapolitical Origins of the Military Industrial Complex.” The real mission, however, was to present a memorial tribute to Jerry Smith, which I accomplished with commentary and about fifteen minutes of video from one of Jerry’s lectures. Jerry died of pancreatic cancer last March [2010], after diagnosis in January [2010], and he had expected to speak at this conference. As with Danny Casolaro before him, I felt as if Jerry had dribbled the ball down the court and passed it, waiting for me to make the final dunk shot. Casolaro, of course, had passed the ball on to two mutual friends of Jerry Smith, me and Jim Keith. Like a couple of Globetrotters we passed it back and forth and finished the game by creating The Octopus, a book sort of like what Casolaro would have written if he hadn’t died under suspicious circumstance.

As I explained to the attendees, I did not expect to make much of a conspiracy out of Jerry’s death. I noted that fast acting cancers often play a role in parapolitical lore—Jack Ruby died of one, as did Mae Brussell. Jerry’s books on Weather Warfare and the HAARP array have been out for a quite a while and I was unaware of any new research avenues that would bring him to danger. Nevertheless, I did receive a note suggesting that Jerry’s death had something to do with the BP oil disaster and its connection to the HAARP array.

Seemed a bit of a stretch. As gallows humor, in my last communication to Jerry Smith I noted about his recent appearance on Jesse Ventura’s conspiracy show: “Jerry! You finally get some major media exposure and now this!” I intended, in fact, to suggest that I do make a big conspiracy out of it, noting that conspiracy issues surrounding Jim Keith’s death probably added a decade to the commercial shelf life of his books. Jerry died before I could make the suggestion, but I’m certain his cynical sense of humor would have at least appreciated the suggestion.

Jerry and I did Jim Keith’s memorial together at one of the Conspiracy Cons. At the time, I don’t think Jerry was entirely convinced of any conspiracy involving the death of my old writing partner, although that seemed to change in the years that followed. My case for it then, as now, remains: Keith died of a knee injury, surgical procedures for which previously had been banned because they led to fatalities. The reason for that eventually traced to a tissue bank in Atlanta that had been supplying cartilage tissue containing a bacteria called Clostridium perfringens. Shortly thereafter, our mutual friend and publisher Ron Bonds died from Clostridium perfringens. Long ago Keith had documented that the CIA maintained stockpiles of the bacteria.

Robin Ramsay once noted things in the conspiracy world develop as the result of either cock-ups, coincidence or conspiracy. Common sense dictates that no single one of these can explain everything, and that most parapolitical events come about as a result of some combination , and sometimes shit just happens. No one interested in Jim Keith’s death had the resources to investigate and come to absolute conclusions about the cause, and of course questioning the official version was where Jim’s work began. He fell off the Burning Man stage and died of the injury days later at the hospital. I think Jerry originally took the “shit happens” approach to understanding it but changed his mind as information about what happened at the hospital began to give him suspicions. I had only the intriguing coincidences—made more intriguing by the fact that clostridium is a bacteria genus of over 100 species, and these three instances involved the same precise one.

Although grieved, Jerry had felt overshadowed by the larger-than-life Jim Keith and even once remarked that he felt relieved to be out from under its shadow. Most people were acquainted with Jerry’s work as a helper to Keith and Keith treated him as a bit of a foil personally. Jerry did come into his own after Keith had passed, writing books on weather warfare, the HAARP array and even one on the Spear of Destiny, which supposedly pierced Christ’s side and eventually wound up in the hands of Adolph Hitler. Whereas Keith’s books all dealt with broad themes of mind control and mass manipulation, and weird sociological phenoms like black helicopters and Men In Black, Jerry zeroed in on particulars, like a fanboy obsessed with comic book trivia. Keith wrote with a charm that transformed the way people think about conspiracy; Jerry controlled the detail in a way that would make an academic envious. They had a sharp contrast in style. 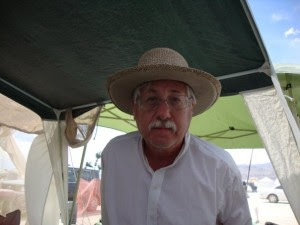 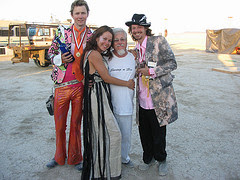 Some of Jerry Smith's happiest moments were at Burning Man in Nevada, where he had years ago lost his best friend Jim Keith (shown below), in a strange "accident" in 1999. Above are photos of Smith at Burning Man in 2009 and earlier. 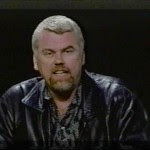 I let the ARC conventioners enjoy a good fifteen minutes of Jerry’s DVD on HAARP and noted that recent news reports recently have been connecting the array to things like the honey bee hive collapses and the recent heatwave in Moscow, and ended with a call for what turned out to be a long and loud round of applause for the dear departed. Then I returned to the business of outlining the parapolitical origins of the military industrial complex. When Keith and Bonds died, I used to tell interviewers “you’re drinking with number three”, as Jim Morrison said after Janis Joplin and Jimi Hendrix died. But I’m still here and they’d be drinking with number four now, so the quote loses its eerie quality. Shit happens, and I’m sorry to see Jerry go but I do not see a mysterious pattern of conspiracy here as I did with Big Jim Keith. It was, in fact, quite a counter-conspiracy coup that death didn’t stop Jerry Smith from making that last address to the ARC conference.
Posted by Loren Coleman at 8:53 AM

Some ultra-aggressive cancer cell lines such as the HeLa strain are potentially communicable through injection. It would still likely take at least weeks to form large tumors, though.