Kenny McKinley's suicide is the latest such event among NFL players. Here is a list of some famed, known American football players who have died by suicide. 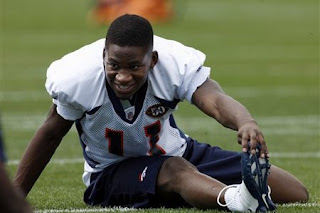 Kenny McKinley, a Denver Broncos (NFL) wide receiver who was out for the season recovering from knee surgery, was found dead of an apparent suicide September 20, 2010, Monday afternoon at his home, according to the Denver Post. The body of McKinley, 23, was found by authorities in a second-floor bedroom with what appeared to be a self-inflicted gunshot wound at around 3:25 p.m. MDT. A second-year player out of South Carolina, he had undergone season-ending surgery for a recurring knee injury in August 2010.

The death is the third for the Broncos since 2007. Cornerback Darrent Williams died in a drive-by shooting and running back Damien Nash collapsed at a charity basketball game in 2007. The Denver Post reports that current and former Broncos were attending a fundraiser for the Boys & Girls Club of Metro Denver, site of the Darrent Williams Memorial Teen Center, when they learned of McKinley's death.

Lyle Randolph "Al" Bigbee (August 22, 1893 in Waterloo, Oregon - August 5, 1942 in Portland, Oregon) was a former outfielder and pitcher for the Philadelphia Athletics and Pittsburgh Pirates and halfback for the Milwaukee Badgers. Bigbee died by suicide due to a self-inflicted shooting.

John Henry Mohardt (January 21, 1898 in Pittsburgh, Pennsylvania – November 24, 1961 in La Jolla, California) was a former professional football and baseball player. Mohardt played in the National Football League for the Chicago Cardinals, Racine Legion, and Chicago Bears from 1922 - 1925. One of Mohardt's teammates with the 1925 Bears was pro football Hall of Famer Red Grange. Mohardt also played in five major league baseball games in 1922 with the Detroit Tigers. Mohardt later earned an M.D. and served in the United States Armed Forces during World War II. He died by suicide in La Jolla, California, on November 24, 1961, the day after Thanksgiving that year. (The football games and scores that Thanksgiving were Green Bay Packers 17, Detroit Lions 9 and New York Titans 21, Buffalo Bills 14.)

James Efflo Tyrer (February 25, 1939–September 15, 1980) was an American football offensive tackle in the American Football League for the Dallas Texans/Kansas City Chiefs. He also played in the National Football League for the Chiefs and the Washington Redskins. After football, a series of apparent business misfortunes culminated on September 15, 1980 when Tyrer, the father of four, shot his wife and then died by suicide by turning the gun on himself.

Larry Bethea (July 21, 1956 – April 24, 1987) was an American football defensive lineman who played six years in the National Football League for the Dallas Cowboys. He later played for the Michigan Panthers, Oakland Invaders and Houston Gamblers of the United States Football League. He died of an apparently self-inflicted gunshot wound within hours of being identified as a suspect in two armed robberies.

Jeffrey Lawrence Alm (March 31, 1968 – December 14, 1993) was an American football player who played defensive tackle for the Houston Oilers of the National Football League. According to an eyewitness, Alm and his best friend, Sean P. Lynch, had dinner at a Houston-area steakhouse on December 13, 1993. At 2:45 a.m. Central Standard Time the following day, Alm’s Cadillac lost control heading south on Intrastate 610 southbound at the 59 north exit ramp and Lynch was thrown out of the car through the passenger window to his death. Alm had been speeding and lost control of his 1993 Cadillac Eldorado on a curved exit ramp. After the crash Alm ran across the ramp and looked down an embankment towards the Southwest Freeway, discovering that his boyhood friend had been thrown to his death 30 feet below. Apparently distraught by his best friend’s death, Alm took out a pistol grip shotgun, fired two shots into the air and then shot himself in the face.

Thornton Steve Stonebreaker (born October 28, 1938 in Moline, Illinois; died March 28, 1995 in Metairie, Louisiana) was a professional American football linebacker in the National Football League. He played eight seasons for the Minnesota Vikings (1962-1963), the Baltimore Colts (1964-1966), and the New Orleans Saints (1967-1968). Stonebreaker died by suicide on March 28, 1995 by inhaling carbon monoxide from a car exhaust.

Lawrence Morgan "Larry" Kelley (May 30, 1915 – June 27, 2000) was an American football player born in Conneaut, Ohio. He played end, for Yale University. While at Yale he was a member of Delta Kappa Epsilon fraternity and Skull and Bones, and was the second winner of the Heisman Trophy in 1936, the year it was renamed in honor of John Heisman. To benefit of his nieces and nephews, Kelley sold his Heisman Trophy at an auction in December 1999 for $328,110 to the owner of The Stadium Museum, Restaurant & Bar in Garrison, New York, where it now resides. On June 27, 2000, in failing health, Kelley died of an apparent self-inflicted gunshot wound at his home in Hightstown. It was said to be a suicide by the Hightstown police.

Andre Waters (March 10, 1962 – November 20, 2006) was an NFL defensive back who played for the Philadelphia Eagles and Arizona Cardinals from 1984 to 1995. On November 20, 2006, three days before Thanksgiving, Waters died by suicide shortly after 1 a.m. on November 20, 2006 (three days before Thanksgiving), according to the Hillsborough County (Fla.) Sheriff's Office, dying of a gunshot to the head. He was at his home in Tampa, Florida where he was found by his girlfriend. No suicide note was found. Later investigations have revealed a possible link to mild traumatic brain injury, which may have resulted in post-concussion syndrome.

Shane Dronett (January 12, 1971 – January 21, 2009) was an American football defensive lineman, who played for the NFL's Denver Broncos, Detroit Lions and Atlanta Falcons between 1992 and 2002. On January 21, 2009, Dronett was found dead at his home near Atlanta, Georgia. The death was ruled a suicide by the Gwinnett County Medical Examiner's office. 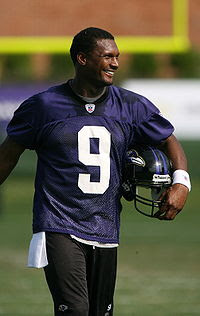 It will be recalled that Stephen LaTreal McNair (February 14, 1973 – July 4, 2009), born on Valentine's Day, died on Independence Day 2009, when his mistress, Sahel Kazemi, shot and killed him before turning the gun on herself. Steve McNair (nicknamed "Air McNair") was an American football quarterback who spent the majority of his NFL career with the Tennessee Titans. He retired as a Baltimore Raven in 2007.
Posted by Loren Coleman at 8:25 AM

each time it's such a tragedy...