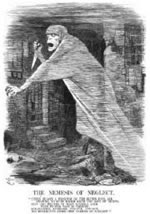 THE NEMESIS OF NEGLECT.
There floats a phantom on the slum's foul air,
Shaping, to eyes which have the gift of seeing,
Into the Spectre of that loathly lair.
Face it--for vain is fleeing!
Red-handed, ruthless, furtive, unerect,
'Tis murderous Crime--the Nemesis of Neglect!
Jack the Ripper cartoon was published September 29, 1888 in Punch, or The London Charivai, John Tenniel.

The attempted self-immolation by David Parker, 24, at Longfellow Square, Portland, Maine, a block from the Lafayette Hotel, occurred on September 29, 2010. As I have pointed out in recent postings here, the statue dedicated to Henry Wadsworth Longfellow was unveiled on September 29, 1888.

This date is also linked to the infamous Jack the Ripper murders. The same day that Punch published a caricature of Jack the Ripper, the Ripper decided to strike again. The illustrator of that cartoon would be none other than Sir John Tenniel (28 February 1820 – 25 February 1914), who is remembered today for his illustrations for Lewis Carroll's Alice's Adventures in Wonderland and Through the Looking-Glass.

While recorded to have been found dead on September 30th, 1888, the two victims, Stride and Eddowes, would have been killed on the evening of September 29, 1988. Elizabeth Stride was found with her throat cut in Berner Street, St George’s, London, the next morning, on September 30th, as was Mrs May (sic) Eddowes, who had been murdered and mutilated in Mitre Square, Aldgate, London. The Freemasonry symbolism of these 1888 serial killings, emphasized especially by the location of Mitre Square, have been discussed at length in the Ripper literature.

Talk about going through the looking glass.
Posted by Loren Coleman at 3:31 PM