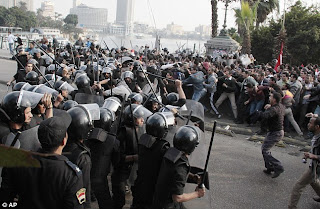 The Middle East has erupted, set afire, literally, by fire suicides. Today, it was Egypt. Leaders throughout the Arab world do not know what nation will be touched next. The copycat effect is clearly very real.


In the past, the news of politically-based self-immolations were spread by television news and newspapers. Today, it is Facebook and Twitter that are telling the word what is going on in the Middle East, in mass protests throughout the region.


Reports throughout several Arab countries tell of at least 13 self-immolations having occurred since the fiery suicide of Mohamed Al Bouazizi, a Tunisian man who helped topple his government. But the Jerusalem Post is stating today that at least six new cases of self-immolations have occurred in Egypt. News services are losing count of the widespread number of reports of immolations.

The 26-year-old Tunisian fruit vendor (shown in hospital before his death) doused himself with gasoline on December 17, 2010, to protest his alleged mistreatment by local officials. His death on January 4, 2011, caused the public outrage that collapsed the government of President Zine el-Abedine Ben Ali."This was really the spark, literally and figuratively, that set Tunisia on fire," said Sultan Sooud Al Qassemi, a non-resident fellow at the Dubai School of Government.
Following Bouazizi's example, at least 13 men, most of them in Egypt and Algeria but one each in Saudi Arabia, Morocco and Mauritania, have been involved in self-immolations. Here is a partial list: five Algerians - Jan. 13, 15, 16; one Mauritanian and four Egyptians - Jan. 17, 18.

Protestors carry the body of dead man during an anti-government protest in Tirana, AlbaniaOver the weekend, an unidentified Saudi Arabian man set himself on fire in that country's first self-immolation, reported the BBC. The incidents are part of a wave of protest in North Africa and the Arabian peninsula. Protestors filled the streets in Jordan, Egypt, Algeria and Yemen this weekend. Activists in Algeria were met with batons, while n Yemen, protestors demonstrating in support of the Tunisian revolt called for their president to step down. President Ali Abdullah Saleh has ruled Yemen for 32 years, first as president of North Yemen from 1978 to 1990, and as head of the consolidated country ever since.

Egyptian demonstrators protest in front of the Tunisian embassy in Cairo, Egypt, Saturday, Jan. 15, 2011, in support of Tunisian national protests which have swept the North African Arab country after its longtime president was forced out by protests. Arabic signs read 'revolution in Tunis, tomorrow in Egypt'. 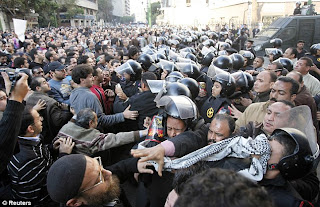 Today, January 25, 2011, saw thousands of anti-government protesters (above) inspired by the Tunisian revolution clashed with riot police in the centre of Cairo today demanding the overthrow of president Hosni Mubarak.
Police responded with water cannon and attacked crowds with batons and  tear gas to clear crowds demanding an end to the country's grinding poverty.
The prostest, the largest Egypt has seen for years, began peacefully, with police showing unusual restraint in what appeared to be a concerted government effort not to provoke a Tunisia-like mass revolt.
To the north, in the Mediterranean port city of Alexandria, thousands of protesters also marched in what was dubbed a 'Day of Rage' against Mr Mubarak and lack of political freedoms under his rule.

In another parallel with the Tunisia protests, the calls for rallies went out on Facebook and Twitter, with 90,000 saying they would attend.Self-immolations were a frequent form of protest in South Vietnam in the 1960s. A Buddhist monk set himself on fire in 1963 to protest alleged persecution of Buddhists by the regime of President Diem, inspiring multiple copycats. Then immolations were used by anti-Vietnam War protestors in the U.S. in the sixties and Eastern European foes of Soviet domination employed the technique in the 1960s, 1970s, and 1980s.


Indeed, as the New York Times noted over the weekend, "Jan Palach, a 20-year-old Czech who burned himself to death in Prague in 1969 a few months after the Soviet invasion of his country, is remembered as a martyr of the struggle against Communism....suicide sometimes spreads like a disease, especially when heavily covered in the media."


All of the fire suicides we are reading about during the last month are most certainly copycats.
Posted by Loren Coleman at 8:04 PM

Jan Palach was followed one month later by Jan Zajic [ zie - eets] a couple of months later by Evzen Plocek [ plots-ek], so the 'copycat' effect was in effect then.
Re: The Buddhists demonstrating against Diem - he was killed on Nov.2nd 1963, 20 days before fellow-Catholic JFK.

The funeral procession for Jan Palach was immense, almost the whole of Prague turned out.

Apparently Djinns are born of fire

Wikipedia's page on what's getting called by some the "Jasmine Revolution" is frustratingly one dimensional. It quotes Brit reporter Robert Fisk as asking if this unrest will be "The end of the age of dictators in the Arab world?" But the page doesn't look beyond the surface at all. Does anyone here know what the general consensus in the Middle East is regarding these revolts? Are dictators to be replaced with religious rule? With secular governments? With Western-syle organizations or Arab-rooted traditions? Does anyone know what the big picture is here, behind the "burning man" images?