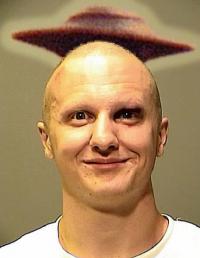 Jared Loughner, with UFO imagery
created by Red Pill Junkie, a Fortean blogger.
"What is government if words have no meaning?" Jared Lee Loughner asked Rep. Gabrielle Giffords, D-Ariz., in 2007.

So what is the meaning of Loughner? It appears to be a Americanized version of the German name Lachner, which is an "occupational name for a physician, Middle High German lachenære 'healer' (see Leach), which issues from the "topographic name for someone who lived by a pond or lake, from Middle High German lache."  The leeches found in aquatic locales, of course, are associated with the medieval medical practice of "bleeding," often by applying leeches to the sick person, (Dictionary of American Family Names, Oxford University Press).

"Lough" is the Irish word for "loch" or "lake," so the origins of the name is decidedly watery in nature.


The Jared Lee Loughner case has developed into a classic weird trip through a variety of twilight language links, often with an assortment of strange space coincidences.


Here's a list of some that have been revealed, to date:


Jared Loughner is allegedly a believer in numerous conspiracy theories. Loughner did express views such as the U.S. Government was responsible for the 9/11/2001 attacks, a New World Order would bring about a one world currency, there would be a 2012 apocalypse, NASA had faked spaceflights, and the government was using mind control to brainwash people by controlling grammar.

Some of the more bizarre speculations that he espoused at the Above Top Secret forum (as Erad3) involved space-related topics, including that the Space Shuttles and the International Space Station were flying empty, without humans aboard, and that NASA's Mars rovers were faked. Erad3's logic was incredibly contoured. For example, he would write passages like this:

If the NASA Space Shuttle is with a crew in orbit then they're able to perform the mission with the conditions in orbit.

They're not able to perform the mission with the conditions in orbit.

Thus, the NASA Space Shuttle isn’t with a crew in orbit.

If the pictures are from mars then the mars rover is on mars.

The Mars rover is not on mars.

Therefore, the pictures are not from mars.

NASA creates a remote control rover that is impossible to reach mars.

NASA fakes the situation they plan with the mars rover.

Therefore, NASA creates a remote control rover that’s impossible to reach mars and fakes the situation they plan with the mars rover.

Considering Loughner's NASA-related thoughts, the factual and fictional links to the NASA Space Programs in the Tucson shooting are chilling.


Loughner's alleged assassination target was Representative Gabrielle Giffords. She has been married, since 2007, to NASA astronaut and Space Shuttle commander Mark E. Kelly. Mark Edward Kelly (born February 21, 1964, in Orange, New Jersey) is an American astronaut. Kelly is the commander of STS-134 Endeavour, the final planned mission of the American space shuttle program. 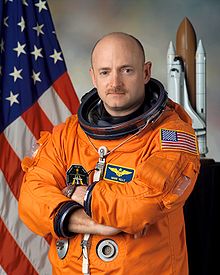 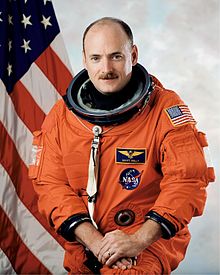 Gabby Giffords' husband's brother is an astronaut too. Mark E. Kelly's twin brother, Scott Joseph Kelly, is also a NASA astronaut. The Kelly brothers are the only twins and the only siblings who have both traveled in space.

Scott J. Kelly (born February 21, 1964, in Orange, New Jersey) is an American astronaut. Kelly is the current commander of the International Space Station, Expedition 26 (ISS). He took over command after the undocking of Soyuz TMA-19 on November 25, 2010. Kelly served as a flight engineer on the final part of Expedition 25. A veteran of two space shuttle missions, Kelly joined the crew of ISS on October 9, 2010 after arriving on a Russian Soyuz spacecraft. He was in space when his sister-in-law was shot.

On 1.11.11, Commander Scott Kelly, Gabrielle Giffords' brother-in-law, led a moment of silence through NASA at the International Space Station. "The crew of ISS Expedition 26 and the flight control centers around the world would like to observe a moment of silence in honor of all the victims, which include my sister-in-law Gabrielle Giffords, a caring and dedicated public servant," said Commander Kelly. Kelly is in charge of a six-person team at the ISS.

4) "Erad" appeared at first to refer to "radiation energy density," a term associated with electromagnetic radiation in space. Erad thus would be a space-associated, frequently used, NASA-understood abbreviation. Jared Lee Loughner apparently used the name erad3 on the Above Top Secret forum, where he made an impression disputing the reality of NASA missions.

Some have said that "erad3" means "triple dare," since "erad" is "dare" spelled backwards + 3.  Info on 1.14.2011 supports Loughner having used the name "dare" on a gaming fantasy site, so "erad" may be "dare" backwards. Perhaps it is merely another coincidence that there are NASA documents denoted with the "ERAD3" designation.

Was Loughner obsessed with the NASA links to Rep. Gabrielle Giffords?  If so, we may never know.  Meanwhile, the cosmos played a bizarre twist of fate in the next chance event. 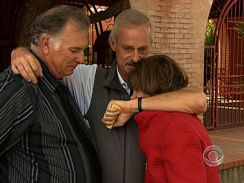 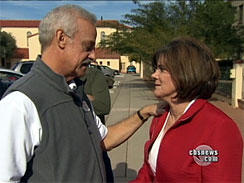 Dr. David Bowman and his wife Nancy both rendered care to victims of the Tuscon shooting; they are shown above with Bill Hileman.  The main person that Dr. Bowman treated was Bill's wife, Suzie Hileman.  Suzie Hileman had taken 9-year-old Christina Taylor-Green to the "Congress On Your Corner" event.  Christina was born on 9/11/2001. 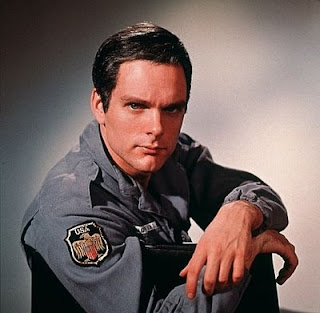 The fictional astronaut and scientist Dr. David Bowman is a character in the Space Odyssey series. He first appears in a story jointly written by Stanley Kubrick and Arthur C. Clarke, called 2001: A Space Odyssey (which is both a book and a movie). The character later appears in the sequel to the book, 2010: Odyssey Two and the sequel to the movie, 2010: The Year We Make Contact. The character also returns in two more books by Arthur C. Clarke, 2061: Odyssey Three, and 3001: The Final Odyssey. In the foreword to 2061: Odyssey Three, Clarke makes it clear that the plots of the movies and books do not necessarily follow a linear arc, and take place in parallel universes, consequently there are apparent inconsistencies in the character of David Bowman throughout the series. 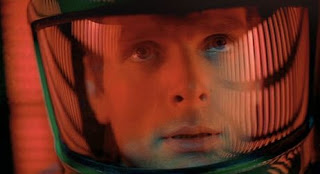 In the two movies, the character is played by Keir Dullea. The character is infrequently referenced as being "twin astronauts" in parallel universes.


As has been pointed out on other sites and forwarded to me by correspondent SMiles Lewis, another tie-in with the David Bowman/Space Odyssey coincidences, of course, is that the twin brother of Gifford's husband, Scott Kelly, was a pilot for the space shuttle Discovery, which is the name of the spaceship on which David Bowman makes his fateful journey in 2001 on his way to becoming the Starchild. The links revolving around the first flight for Mark Kelly in 2001, and that the year 2001 was the year of birth for Christina Green are all rather chilling.

What other weird links will be revealed in this Loughner story? 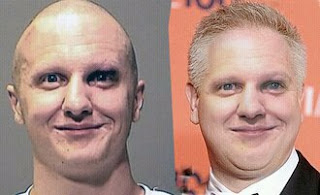 Lough/Lake...Loughner's mother is the manager at Agua Caliente Park in Tucson (website description: this 101-acre park features a natural spring and pond).

if loughner means healer and jared means fallen, then he is the "wounded healer."

the wounded healer is known as chiron in greek mythology.

the wounded healer is also a jungian archetype.

Who's the guy pictured next to Jared at the bottom of the post? The similarities are uncanny.

The ages of the victims add up to 333. Great site by the way.-sv

anonymous 6:20> Who's the guy pictured next to Jared at the bottom of the post? The similarities are uncanny.

Isn't it Glen Beck? I've seen other people comment on them looking similar. Glenn Beck and Jared Loughner: Separated at birth? at Crooks and Liars.

There is a weird conspiracy theory I saw somewhere that suggests many people in pop culture are clones drawn from an established "bank" of DNA that creates useful and control-able drones and that's why so many "celebrities" seem to have similar features.

Thanks for the link Mark, in reply to the 6:20 comment!

The juxtaposition of the faces line up rather nicely. Funny thing is, Beck was in Phoenix from 1987 through 1989 according to Wikipedia...and Loughner was conceived during that time period...maybe there is a conspiracy/connection here?!

After reading Wiki about Beck's crazy life...it may support the old adage that the apple doesn't fall far from the tree.

Really interesting. I wrote about this event before I knew about your post here.

I've linked your site to my essay.


Why do these resonant parallels emerge out of the ether? Is reality a sort of echo chamber where ideas and memes bounce off each-other in a way that forces them to emerge in some sort of synchronistic manner?

I suspect strongly that there is something more to the Gabrielle Giffords shooting. If there are such strange reverberating plot elements to that story; it makes me think that there simply must be a reason behind it all. Do powerful human events simply create their own synchronous magic?

My only rule for deciphering synchronicities is to pay attention.