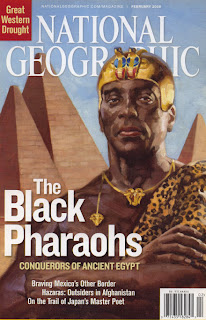 The Kingdom of Kush was established in about 1070 BC. The first cultures arose in Sudan before the time of a unified Egypt. Now, days before a new Egypt emerged on February 11, 2011, a new southern nation in the ancient land of Kush/Cush has appeared on the horizon on February 7, 2011. 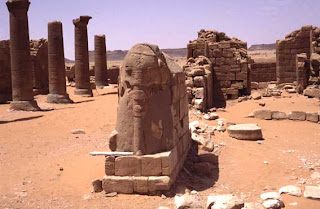 Immolations & Facebook Revolution
These are incredible times. The new tomorrows are not over. Other countries, e.g. Libya, Algeria, Yemen, plus more Arab lands and even Italy and Serbia, are feeling the cries from the people calling for freedom.

We have been this way before, of course. While others have noted detailed examinations of the timing, let us observe other specifics beyond the significance of Tahrir Square.

The important role of self-immolations in sparking the wave of protests and changes we are seeing in governments cannot be underplayed. It began in Tunisia in December, and quickly spread throughout the Arab world, with immolations in several countries of the region.

Egypt fell on February 11, 2011, after Tunisia saw change in January. Immolations were a key. The fall of Tunisian President Zine al-Abidine Ben Ali -- the first time in generations that an Arab leader has been toppled by public protests -- sent a sharp signal to the rest of the region, dominated by autocratic regimes. The protests that brought down Ben Ali erupted after the self-immolation of 26-year-old vegetable seller Mohamed Bouazizi, who set himself on fire on December 17, 2010. The same type of incidents swept the region. More protesters set themselves afire in Egypt, Mauritania and Algeria on Monday, January 17, 2011, in fiery suicide copycats. This was followed by more in Saudi Arabia, Morocco, and France. (As noted in The Copycat Effect, fire suicides are a powerful, political form of behavior contagion.) 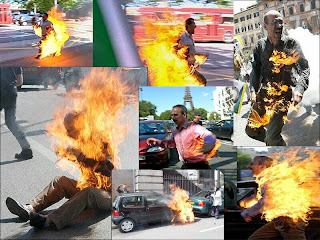 The self-immolations of Buddhist monks in South Vietnam, beginning in 1963, eventually pushed that government to change leadership, and foreshadowed the political overturns in Southeast Asia. 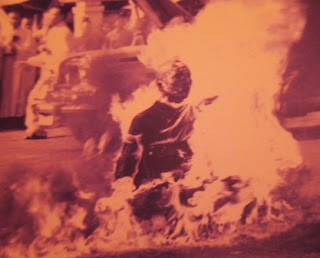 Likewise, the fiery suicide of Jan Palach, a 20-year-old Czech who burned himself to death in Prague in 1969, was the spiritual precursor to what would grow into the blazing fire of change that would transform Eastern Europe.

These are often called "grassroots movements," although today's massive waves of political realignments are rightfully being termed the "Facebook Revolution."

The most comparable historical events to the current protests and changes seen throughout the Arab World are the Revolutions of 1848, which impacted Europe for decades. 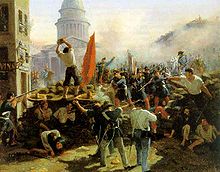 Barricade on the rue Soufflot, an 1848 painting by Horace Vernet.
The Panthéon is shown in the background.
The European Revolutions of 1848, known in some countries as the Spring of Nations, Springtime of the Peoples or the Year of Revolution, were a series of political upheavals throughout Europe. Described by some historians as a revolutionary wave, the period of unrest began in France and then, further propelled by the French Revolution of 1848, soon spread to the rest of Europe.

It will be recalled that in the midst of all of the calls for change from the poor classes (reflective of the situation in the Arab World today), Karl Marx and Friedrich Engels had written at the request of the Communist League in London (an organization consisting principally of German workers) The Communist Manifesto, published in German in London on February 21, 1848.
The people of each of the following locations had massive protests and revolutionary incidents: Italian states, France, German states, Denmark, Schleswig, Habsburg Empire, Hungary, Slovakia, Switzerland, Greater Poland, Wallachia, Belgium, and even Brazil.


Although most of the revolutions were quickly put down, there was a significant amount of violence in many areas, with tens of thousands of people tortured and/or killed. While the immediate political effects of the revolutions were largely reversed, the long-term reverberations of the events were far-reaching. 1848 was a watershed year for Europe, and many of the changes of the late nineteenth and early twentieth centuries have origins in this revolutionary period.

The Kingdom of Kush
While the newest governmental change in the world today is the new Egypt, the newest full nation also was announced a few days ago, on February 7, 2011. 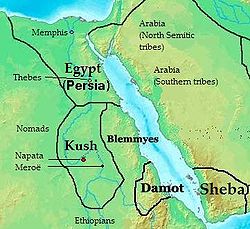 Due to the vote for independence, the citizens of southern Sudan voted in overwhelming numbers to break away from the northern portion of their country and form a new entity. While it may not formally have a new name yet, other than press reports calling it South Sudan, Sudan's President Omer Hassan Al-Bashir accepted the final results of the referendum where southerners almost unanimously voted (by nearly 99%) for the secession of their region.  South Sudan will be declared an independent state on July 9, 2011. This new land is very reflective of the ancient country known as the Kingdom of Kush.

We should not take the news lightly that old Kush/Cush has returned.  The Kingdom of Kush, like Egypt, is ancient and dominated by smaller pyramids and familiar artifacts. 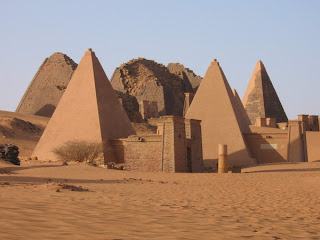 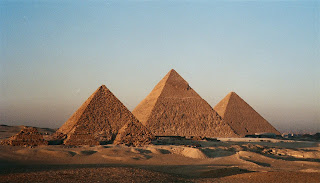 
The Kingdom of Kush or Cush was an ancient African state centered on the confluences of the Blue Nile, White Nile and River Atbara in what is now the Republic of Sudan. It was one of the earliest civilizations to develop in the Nile River Valley. Having also been referred to as Nubia, and as "Ethiopia" in ancient Greek and Greco-Roman records, the Kushites left their mark on various aspects of the ancient world and their legacy is still readily discernible from the various archaeological field sites scattered throughout modern Sudan.


Biblical Prophecies of Cush
The name given this ancient civilization issues from the Bible's Old Testament, where Cush (Hebrew: כוש) was one of the sons of Ham (Genesis 10:6) who settled in northeast Africa. As noted in the Bible and at different times in the ancient world, a large region covering northern Sudan, modern day southern Egypt, and parts of Ethiopia, Eritrea, and Somalia was known as "Cush."
The Hebrew Bible refers to "Cush" on a number of occasions, though various English translations translate this as "Nubian", "Ethiopia", "Sudan", and "Cushite" (Unseth 1999). Moses' wife, Tzipporah, is described as a Kushite in the book of Numbers 12:1. Some contend that this Cush was in southern Arabia. All of this is complicated by the fact that the Septuagint translated "Cush" as "Aethiopia," leading to the misleading conclusion that "Cush" should be equated with the borders of present day "Ethiopia."

Sudanese Christians in southern Sudan believe the independence of their nation was foretold in the Bible more than 2,000 years ago. Isaiah 18 is one of several passages that refer to the land of Cush, which describes the people as tall and smooth-skinned and the land as divided by rivers.

"It used to be read so many times on Sunday," said Ngor Kur Mayol, who drove to Nashville from Atlanta earlier this month to vote in the independence referendum. "It mentions a lot the way we were suffering in for so many years and how that same suffering, we're going to end it today, to vote for independence," (according to the Associated Press writer Travis Oller).


The interpretation is not so far-fetched, said Ellen Davis, a professor at Duke Divinity School who has been working since 2004 with the Episcopal Church of Sudan to strengthen theological education there.


Davis said the belief in the prophecy is nearly universal among the Christians she has met in Sudan.


Jock Paleak, pastor at the Sudanese Cumberland Presbyterian Church in the Nashville suburb of Gallatin, explained how Isaiah 18 has been interpreted to refer to independence.


"The Bible says when they will raise their flag on the mountain, the whole world will see."


Isaiah 18 concludes with a passage Paleak said predicts the end of rule by the Muslim north. He paraphrases and explains it: "'They will bring their gifts to the mountain of Zion,' which means we will be free to praise God in our own way in our own land." 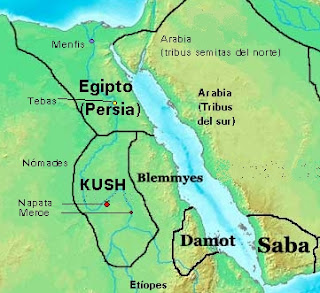 Portions of this blog, in terms of photos
and content, are reprinted under the
Fair Use Doctrine of International Copyright Law
as educational and/or editorial material
of which commentary is made,
without benefit of financial gain.
This is applicable throughout
the entire Twilight Language blog.
Sections of this entry may reflect summaries of data from Wikipedia.
Posted by Loren Coleman at 12:47 PM

In hindsight the student at the UK student riots/demonstrations who threw a fire-extinguisher from a roof nearly killing a police officer might be a portent of the immolations.

Cush in Hebrew KVSh enumerates to 326 which is the same a YHShVH- Jesus.

PS: I always though Mose's wife was a Midianite