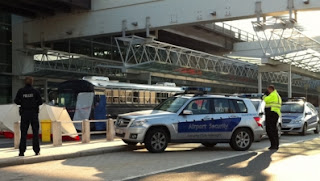 Two U.S. airmen have been killed in a shooting in front of Terminal 2 of the Frankfurt airport, Germany. AP. 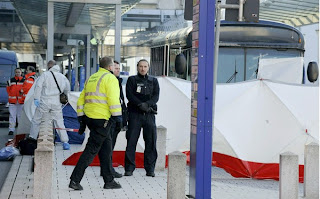 Police stand around a covered U.S. military bus at Frankfurt airport after the shooting. Photo: Boris Roessler.
A shooter has killed two airmen and wounded two other airmen in an attack on a US Air Force bus at the Frankfurt, Germany airport, on March 2, 2011.

"What we know is that a man opened fire on a bus with U.S. soldiers that was standing in front of Terminal 2 at Frankfurt airport," said a Frankfurt police spokesman.

A source told Fox News that the shooter yelled "Allah Akbar" when opening fire on the U.S. military personnel. He then dropped his gun at the scene, ran into the terminal and was subdued.


“Allah Akbar" is translated as "God is [the] Greatest," or "God is Great." It is a common Islamic Arabic expression, used as both an informal expression of faith and as a formal declaration.


After 9/11, the FBI released a letter reportedly handwritten by the hijackers and found in three separate copies on 9/11
~ at Dulles,
~ at the Pennsylvania crash site, and
~ in Mohamed Atta's suitcase.

It included a checklist of final reminders for the 9/11 hijackers, including an excerpt which reads: "When the confrontation begins, strike like champions who do not want to go back to this world. Shout, 'Allahu Akbar,' because this strikes fear in the hearts of the non-believers."
Also, in the cockpit voice recorders found at the crash site of Flight 93, the hijackers are heard to be reciting the "Allah Akbar" as the plane plummeted toward the ground.

When in March 2002 Maryam Mohammad Yousif Farhat of Hamas, also known as "Umm Nidal" (and subsequently elected to the Palestinian Legislative Council), learned that her adolescent son died on a suicide mission in which he killed five teenagers, she celebrated by proclaiming "Allahu Akbar!" and giving out boxes of halva and chocolates.

In 2003, when Imam Samudra became the second Bali bomber from a violent Islamist group to be sentenced to death for his role in the 2002 Bali bombings that killed 202 people, Samudra chanted during his sentence, "Allahu Akbar."

In 2004, in an execution video of Nick Berg being beheaded in Iraq, as one man sawed off Berg's head the other captors shouted: "Allahu Akbar!"

In the 2007 Fort Dix attack plot, a group of radical Islamists who were convicted of plotting an attack on the Fort Dix military base in New Jersey had videotaped themselves shooting weapons and shouting "Allahu Akbar."

In 2008, Aafia Siddiqui yelled "Allah Akbar" as she fired at U.S. interrogators.

Times Square bomber Faisal Shahzad smiled and said "Allahu Akbar" after receiving a life sentence in 2010 for his attempted bombing.


After the Germany shooting today, a 21-year-old man was arrested.  He is reportedly from Kosovo.  Kosovo is a disputed territory, created following the collapse of Yugoslavia.

The name of his country, Kosovo (Serbian: Косово, pronounced [ˈkɔsɔvɔ]), is the Serbian neuter possessive adjective of kos, 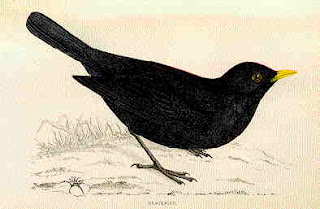 which means "blackbird," an ellipsis for Kosovo Polje "field of the blackbirds," the site of the 1389 Battle of Kosovo Field. The name of the field was applied to an Ottoman province created in 1864.

In the 1389 Battle of Kosovo, Ottoman forces defeated a coalition of Serbs, Albanians, and Bosnians led by the Tsar Lazar Hrebeljanović. Soon after, parts of Serbia accepted Turkish vassalage and Lazar's daughter was married to the Sultan to seal the peace. By 1455, it was finally and fully conquered by the Ottoman Empire.

Intriguingly, considering what I previously wrote about the date of February 17th, Kosovo declared independence on February 17, 2008. 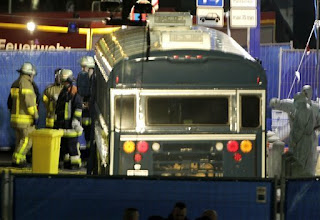 Kosovo Interior Minister Bajram Rexhepi told the Associated Press that German police identified the suspect as Arif Uka, a Kosovo citizen from the northern town of Mitrovica, an ethnic Albanian who has been living in Germany for some time.

"This is a devastating and a tragic event," Rexhepi said. "We are trying to find out, was this something that was organized or what was the nature of the attack."

Mitrovica has been a flashpoint for tensions between Serbians and ethnic Albanians since the city was divided by a NATO bombing campaign in 1999. Although U.S. troops are based in the southeast of Kosovo, they have been called to help alliance forces and local security forces restore order in Mitrovica in recent years.


A senior U.S. intelligence official told ABC News the attack was likely terror-related. Uka is another "dot in the matrix" of a rising threat of fundamentalist terror originating in the Balkans, the official said.
Another man from Uka's home town in Kosovo that was among those arrested in Raleigh, North Carolina, on terrorism charges in July 2009. 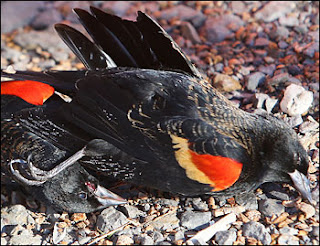