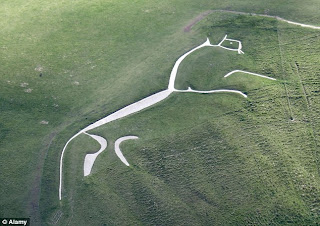 Police have recovered the bodies of one of two suspected murdered individuals near the famed White Horse of Uffington. 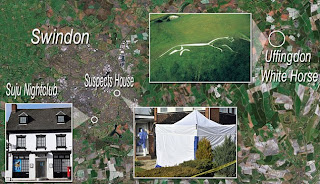 The Uffington White Horse is a highly stylised prehistoric hill figure, 374 feet (110 m) long, formed from deep trenches filled with crushed whitechalk. The figure is situated on the upper slopes of White Horse Hill in the English civil parish of Uffington (in the county of Oxfordshire, historically Berkshire), some five miles south of the town of Faringdon and a similar distance west of the town of Wantage. 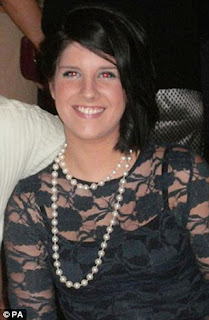 The Daily Mail, among other sources, is reporting that police hunting for the missing Sian O'Callaghan (pictured above) said they have found the body of the 22-year-old buried at this famous beauty spot. 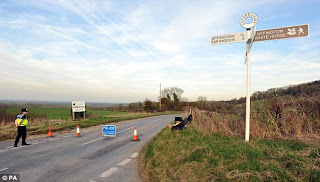 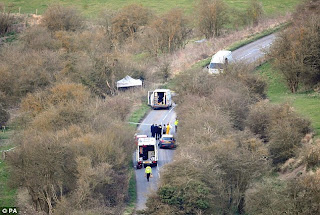 The area is symbolic* and historically significant.
The body was found near the White Horse of Uffington hill, near Wantage, Oxfordshire, around 13 miles from the nightclub where she disappeared from last Saturday evening. Detective Superintendent Steve Fulcher said a 47-year-old cabbie from Swindon was being held on suspicion of the murder. 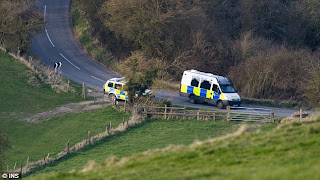 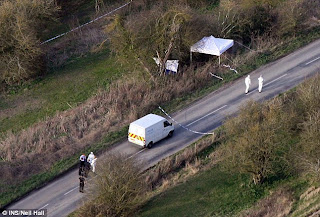 Police search the area for evidence.
The divorced father-of-three is said to have told the police the location of a second body but further details have not yet emerged.
The paper reported:


Although formal identification of the body found today is yet to take place, he said the bodies is believed to be missing Sian and her family had been informed.

Police earlier swooped on a man at an Asda store in Swindon - and arrested him before seizing a vehicle.

The divorced father-of-three teenage girls lived around 11 miles, or a 25 minute drive, from the 'shallow grave' that Sian's body was found in close to the beauty spot.

He is reported to have spoken with police today then walked them to the bodies at the landmark.

Police had previously said that two bodies had been found but it is now understood that only one has been discovered.

The location of a second body believed to be buried nearby was made known to police but they have not yet discovered it.

A Wiltshire Police spokesman said tonight: 'Wiltshire Police would like to make it clear that while the location of two bodies has been identified to the Senior Investigating Officer, only one body has currently been found and this is believed to be Sian O'Callaghan.The second body has yet to be recovered.'

At a press conference tonight Mr Fulcher from Wiltshire Police said: 'A 47-year-old man from Swindon is in custody, having been arrested for kidnap and two murders.

'The location of two bodies have been identified to me by this individual, one of whom has yet to be identified formally, but I am quite clear is Sian.

'I have informed Sian's family, who are obviously deeply distressed, and I would ask you please to give them time and space to come to terms with what's happened.

'The public and the media have been a fantastic help in the desperate effort to find Sian over the last few days. This has of course been a fast-paced inquiry.

'Having found these bodies, you will appreciate that I am under extreme pressure to undertake certain actions and procedures, and I would ask you to give me some time to enable me to recover these bodies, with the dignity and respect that they deserve.'

He said he was concerned for the family, and the effect this would have on them.

'I want to recover these people and give them the dignity they deserve.'

Chief superintendent Steve Hedley added: 'We want to continue with this investigation which is at a significant stage. We have a family who are extremely distraught.'

Police had earlier been combing woodland with sniffer dogs as they searched for Sian who had not been seen since Saturday evening at the Japanese-themed Suju nightclub.

But a white forensics tent had today been set up on a gravel driveway outside the suspect's semi-detached red-brick home in Swindon and it was cordoned off as forensic officers examined the scene.

A neighbour, who did not want to be named, said the father-of-three was divorced and had been separated from his wife.

Sian went missing after a 'girl's night out' with friends at a nightclub in her home town.

She was pictured on CCTV leaving the club in the High Street at 2.52am. The flat she shared with her boyfriend, Kevin Reape, 25, is just a half-a-mile walk away from the night spot but she did not make it home.

Mr Reape contacted police the next morning after failing to get in touch with his partner. 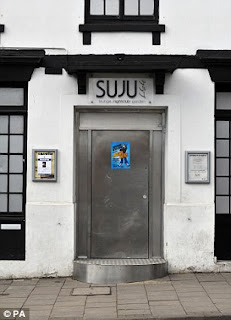 The Japanese-themed Suju nightclub is in Swindon, Wiltshire; it was where Sian was last sighted before she was apparently taken to the woodlands.
More location background:

The hill forms a part of the scarp of the Berkshire Downs and overlooks the Vale of White Horse to the north. Best views of the White Horse figure are obtained from the air, or from directly across the Vale, particularly around the villages of Great Coxwell, Longcot and Fernham. The site is owned and managed by the National Trust.

The figure has been shown to date back some 3,000 years, to the Bronze Age, by means of optically stimulated luminescence dating carried out following archaeological investigations in 1994. These studies produced three dates ranging between 1400 and 600 BC. Iron Age coins that bear a representation comparable to the Uffington White Horse have been found, supporting the early dating of this artifact; counter suggestions that the figure was fashioned in the Anglo-Saxon period now seem untenable. Numerous other prominent prehistoric sites are located nearby, notably Wayland's Smithy, a long barrow less than two kilometres to the west. The Uffington is by far the oldest of the white horse figures in Britain, and is of an entirely different design from the others.

It has long been debated whether the chalk figure was intended to represent a horse or some other animal. However, it has been called a horse since the eleventh century at least. A cartulary of Abingdon Abbey, compiled between 1072 and 1084, refers to "mons albi equi" at Uffington ("the White Horse Hill").
The horse is thought to represent a tribal symbol perhaps connected with the builders of Uffington Castle. It is quite similar to horses depicted on pre-Roman British coinage and the Marlborough bucket.

Until the late 19th century the horse was scoured every seven years as part of a more general local fair held on the hill. When regular cleaning is halted the figure quickly becomes obscured; it has always needed frequent work for the figure to remain visible.

The white horse at Folkestone, Kent, is based on this horse. At Ciudad Juárez, Mexico, there is a larger replica of the Uffington horse.

*For those interested in the general Fortean thoughts of how some unexplained events appear to be linked to "devil names" and other similar sites, please see past entries in the archives of this blog and this passage from my book, Mysterious America.

As those who are aware of my nearly 40 years of human services and forensic work with abused children and adults realize, I do not take it lightly such criminal activity. In understanding the underlying themes of symbolism, it is hoped that future killings, injuries, and harm will be prevented to the victims of such incidents.

Sources: As noted, the mainstream media has covered this story extensively in the U.K. The White Horse of Uffington material is from Wikipedia, for general background.

Posted by Loren Coleman at 5:23 PM