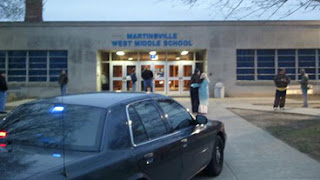 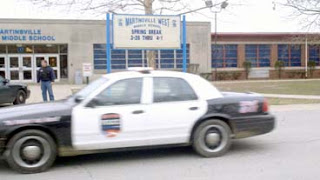 Indiana state police are reporting that a person has been shot at a middle school in central Indiana and the 15-year-old shooter is in custody.
Sgt. Kirk Durnil says the male victim (15 year old Chance Jackson) was shot twice in the stomach Friday morning, March 25, 2011, at West Middle School in Martinsville, Indiana.  Durnil did not identify the shooter or the victim at the school, some 30 miles south of Indianapolis.  WRTV notes the shooter is a recently expelled student.
The Location
Martinsville is a city in and the county seat of Morgan County, Indiana, United States; the population was 11,828 at the 2010 census. Once dubbed the “Goldfish Capital of the World,” today Martinsville has several large fisheries that sell fish to many parts of the world.
From 1888 until 1968 visitors sought out the many artesian mineral water heath spas (called sanitariums then) of Martinsville for health benefits. Over the course of nearly 100 years, almost a dozen sanitariums were in operation for various periods of time, including the first black spa in Martinsville.
Albert Merritt (1871–1958), founder of the Boy's Club in Martinsville, born near Bowling Green, was the son of former slaves. He came to Martinsville Mineral Springs Sanitarium in the 1890s from a job as a porter at the Sennings Hotel in Louisville, and lived at the sanitarium for the rest of his life, never marrying. He worked with the children of Martinsville for fifty years, building a clubhouse on North Marion Street. Merritt Park on the northwest end of town is named for Albert. 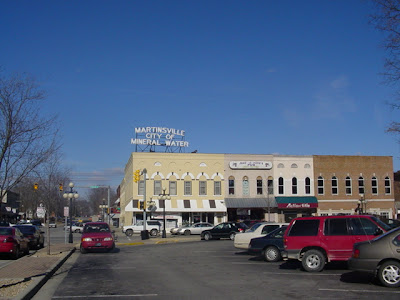 Visitors would travel by rail and road to bathe and refresh in the mineral springs and waters. Many luminaries visited Martinsville in the early 20th century to enjoy the mineral waters and spas for their perceived therapeutic and health restoring qualities. On top of what used to be the National Sanitarium a refurbished neon sign still displays "Martinsville City of Mineral Water " as it did so many years ago.
The Date
Today's date is the birthday of John A. Keel, an author and demonologist who wrote The Mothman Prophecies. The nonfiction book is about the banshee-like appearance of a weird winged creature in 1966-1967, around Point Pleasant, West Virginia, which was seen as a precursor to the collapse of the Silver Bridge on December 15, 1967. A total of 46 people died when the bridge fell into the Ohio River.
On March 25, 1989, a postal worker Donald Mace, at a post office in Poway, California, died by suicide.
On March 24, 1998, the Westside Middle School massacre was a school shooting at the Westside Middle School in unincorporated Craighead County, Arkansas, United States, near Jonesboro. A total of five people, four female students and a teacher, were killed. Ten people, nine students and one teacher, were injured. The perpetrators of the shooting were two students, 13-year-old Mitchell Johnson, and 11-year-old Andrew Golden, who were shooting in an ambush style from the woods in camouflaged clothes.
Some other events that have occurred on March 25th include:
Posted by Loren Coleman at 9:34 AM