April 19th is the anniversary of the deaths occurring at the end of the Waco events and the Oklahoma City bombing. It is an older anniversary of the Revolutionary War, of militia deaths, and other violent incidents. Columbine happened on April 20, 1999. But let's concentrate on April 19th for 1993 and 1995.


The Waco siege began on February 28, 1993, when the United States Bureau of Alcohol, Tobacco, and Firearms (ATF) attempted to execute a search warrant at the Branch Davidian ranch at Mount Carmel, a property located nine miles east-northeast of Waco, Texas. An exchange of gunfire resulted in the deaths of four agents and six followers of David Koresh. A subsequent 51-day siege by the Federal Bureau of Investigation ended on April 19th when fire destroyed the compound. Seventy-six people (24 of them British nationals) died in the fire, including more than 20 children, two pregnant women, and Koresh himself.

The Oklahoma City bombing was the bomb attack on the Alfred P. Murrah Federal Building in downtown Oklahoma City on April 19, 1995, when American militia movement sympathizer Timothy McVeigh allegedly detonated a truck filled with explosives parked in front of the building. McVeigh's co-conspirator, Terry Nichols, had assisted in the bomb preparation. Their motive allegedly was to avenge the government's handling of the Waco siege and Ruby Ridge incidents. (Intriguingly, Rebirth of Pan author Jim Brandon has pointed out to me that "Nichols" and its variations are on his "names of power" list to watch.)

Andrew W. Griffin writes in "Noble lies and hard truths: 17 years after the OKC bombing" at the Red Dirt Report:

Seventeen years later. What have we learned? Why is the same old tired cover story being repeated? Don't those who died or were injured deserve the truth?
Convicted bomber Timothy McVeigh is dead. Co-conspirator Terry Nichols is in federal prison. And Michael Fortier is in the witness protection program. But there were others, as we have noted. But try getting the FBI to release all those videotapes that they snatched from the video cameras that had a view of the Murrah building when McVeigh allegedly pulled up in front of the structure that spring morning.


While waiting to watch the entire film, I ponder, is it dangerous for investigative reporters who ask too many questions about the OKBomb? 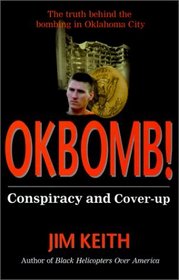 Take my friend, author Jim Keith, who died under mysterious circumstances after he fell from a stage at Burning Man, Black Rocks Desert, Nevada, in 1999. He broke his knee.

Casually, on September 7, Jim entered the Washoe Medical hospital for knee surgery and died in the Intensive Care Unit shortly after surgery. Reportedly, when the operation was completed a blood clot was released and entered his lung. For some reason the coroner's report listed cause of death as "blunt force trauma." Humm?

Cryptically, Jim (who lived in Reno) stated, prior to his death, "I have this feeling that if they put me under I'm not coming back."


The publisher-friend of several of Jim Keith's books, Ron Bonds of IllumiNet Press, died under strange circumstances, at 48, on April 8, 2001. He was rushed to the hospital for food poisoning, apparently contracted at the Mexican restaurant, El Azteca, Ponce de Leon, Atlanta.  (Before becoming a publisher, Bonds had been a rock promoter and producer. Intriguingly, April 8th is also associated with the date that Kurt Cobain, grunge rock star, was found dead from suicide in Seattle.)

Along eastbound I-80 at Sparks, Nevada, near the railroad tracks, the partially clad body of Sherry Marie Yearsley, 47, was found on June 21, 2002. Passengers on a passing Amtrak train spotted the body and notified authorities. Police said Yearsley was a murder victim and her body had been dumped the previous day, June 20, 2002.  At the time of her death, Yearsley was living with her mother in Reno. County records indicated Yearsley was issued a license in 1996 to marry Alfred Alsvary, who was incarcerated at the Northern Nevada Correctional Center in May 2002, on a 1- to 4-year sentence on drug charges. It was unclear if the two ever had married.

Yearsley and author Jim Keith were partners for several years in the 1980s, and parented two daughters, Verity and Aerica. They separated around 1990, and engaged in a custody battle over their girls. Yearsley lost the custody case when Judge Mills Lane (later to become famous due to his court television show), discovered Yearsley had been lying to him. The children then were raised with their aunt Kathy, Jim’s sister, in Oregon.

Of course, a lot of us are still alive, people like Kenn Thomas, Andrew Griffin, and others who are asking the hard questions.


But the more I think about it, the more I see we all have been touched by how close the darkside comes.

I've written here lately about attending some of the early JFK-ASK conferences in Dallas. I recall a strange happening at the end of the "mystery deaths" panel I was on, where I was talking about "suicides" that were not suicides.

The panel had finished, and before I knew it, a young "reporter" had rushed on stage and was rapid-firing questions at me about Danny Casolaro. Casolaro had been declared a "suicide" after he'd been found in a bathtub on August 10, 1991. His death by suicide was dubious. How did this "reporter" know that I had been asking around about Casolaro's "suicide" right before I came to this conference? The "reporter" mumbled something about that he was from The Voice Voice or Vanity Fair or knew they were going to be doing articles on this event. I never was able to determine if any quotes from me actually ever appeared in any of the Casolaro material. I still to this day wonder if this "reporter" was really someone like James Ridgeway, Doug Vaughan, Ron Rosenbaum, or just your run-of-the-mill unidentified black ops agent.

Those were the days.

These are the days.

Of course, a lot of us are still alive, people like Kenn Thomas, Andrew Griffin, and others who are asking the hard questions.

Good people and good researchers. Many thanks for your work. We must confront the forces of greed, corruption and death. Evil must always be resisted.

Jim Keith's "Secret and Supressed vol. 1" is still a very good read. Out of print, of course, but I recommend it.

Per my desktop, 4/19 is Holocaust Rememberance Day as well. And, after watching the completely bogus "Kony 2012" video, the leaders of that movement are supposedly going to plaster Kony posters (which feature Kony, Osama and Hitler together) all over the place in major American cities today, 4/20.

19 April is also the anniversary of the death of English poet Lord Byron. There are some Fortean elements in his life and death. His daughter, Allegra, also died 19 April, some years before he did.