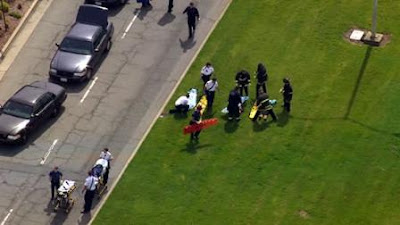 A gunman opened fire at a Christian university in California Monday, killing at least seven people and wounding three more, authorities said. Police say they have a suspect in custody. The university has identified the alleged shooter as a former nursing student at the school.

Late in the day, he was specifically named as One L. Goh, 43 (shown above, being arrested).  He reportedly had pulled a gun, lined up 5 students, and shot them. He then tried to repeat the action with another set of 5 students, but killed two and wounded the other three. Most of the students killed were women.

Authorities earlier described the gunman as a heavyset Korean man in his 40s wearing khaki clothing. "I can confirm that we do have one person who has been detained that we believe is possibly responsible for this shooting," Watson said.

Police said a suspect had been arrested at Alameda's South Shore Center, outside the Safeway store, where he apparently asked store employees to be arrested.

Lisa Resler, 41, said she was leaving the Alameda store with her daughter when she saw a young Asian man with a beanie being confronted by store security. She described him as being "very sedated" as he was handcuffed and taken away.

Two Safeway employees who did not give their names said the suspect had told a customer service staffers that he had shot people and needed to be arrested.

KTVU-TV reported that the shooter was a student and opened fire in a classroom.

First reports told of police responding on Monday April 2, 2012, to reports of at least five people hurt in a shooting at a Christian university in east Oakland, California. The school is located at 7850 Edgewater Road. The shooting happened at Oikos University.

According to the San Francisco Chronicle, at least five ambulances were called and SWAT teams were taking position. It was unclear at first if anyone of the victims were fatally shot.

Television news footage showed wounded people have been brought out of the building, and more gurneys were being brought in. Officers surrounded the building, and it was unclear if the suspect was still on scene.

Pastor Jong Kim, who founded the school about 10 years ago, told the Oakland Tribune that he heard about 30 gunshots in the building. "I stayed in my office," he said.

According of its website, Oikos University offers studies in theology, music, nursing and Asian medicine.
According to its website, Oikos is a Christian university that "was established specifically to serve the community of Northern California in general and San Francisco and Oakland areas in particular. Oikos University was launched to provide highest standard education with Christian value and inspiration."

"Oikos University has a very specific goal and mission to offer education programs in the area of religious studies, music, and vocational nursing in that we motivate, educate and equip students in such a way that they will be able to live enriched life by fulfilling their goals in life and serve the community with their learned professions and skills," the website said.

An oikos (ancient Greek: οἶκος, plural: οἶκοι) is the ancient Greek equivalent of a household, house, or family.

In Ancient Greek literature, the nature of the oikos was prevalent, and indeed, the cornerstone of this ancient society. However, in the 5th century B.C., ancient Greek writers orientated the nature of the oikos with the polis (the city state); the conflict between these two was addressed in Greek Tragic theatre. The conflicting interests with both the oikos and polislead to the structural decay of the society.

An oikos was the basic unit of society in most Greek city-states, and included the head of the oikos (usually the oldest male), his extended family (wife and children), and slaves living together in one domestic setting. Large oikoi also had farms that were usually tended by the slaves, which were also the basic agricultural unit of the ancient economy.

The Greek oikos differed significantly from the Roman domus in architectural layout, although Greece became part of the Roman Empire for a long time. It was built around paved peristyles and had very distinct male and female spaces.

The first part of the house consisted of a "gynaeconite" (γυναικωνίτης, "women's gallery"), or peristyle (περιστύλιον), with the oikos proper, the center of domestic activity, beyond. This latter area consisted of bedrooms and dining rooms. The second part of the house, the "andronites" (ἀνδρωνίτης, pl. ἀνδρωνίται), was the locus of male activity. There one could find more dining rooms, guest suites, and libraries.
+++
There also was another shooting on Monday, in Mississippi.


Five people were shot also on April 2, 2012, on Monday afternoon when a man walked into Hattiesburg, Mississippi's Cucos Mexican Cafe and Cantina off U.S. 49 and opened fire at random.
Hattiesburg police received the call at 3:31 p.m. and responded to the scene. All five victims were immediately transported to Forrest General Hospital. Forrest County coroner Butch Benedict said no fatalities had been reported from the shooting as of Monday night.

Scott Tyner (above), a 44-year-old Hattiesburg resident, has been charged with five counts of aggravated assault in the shooting.
“It seems to be random,” Hattiesburg police Lt. EricProulx said Monday afternoon. “He walked in and started shooting. There was no exchange of words.”
The restaurant has been owned by couple Ricardo and Trish Mussiett for five years, and Trish was in the dining area when the shooting took place.
“It was so loud,” Trish Mussiett said. “I fell to the floor and prayed he didn’t see or shoot me. It was just a lot of chaos, and I thought to myself that it couldn’t be real.”
Mussiett said when the shooter entered the restaurant, he immediately shot a patron at the bar before moving into the dining area and shooting three patrons in a booth and a waitress.
“I just got on the ground and tried to make it back to the office area,” Mussiett said.
Mussiett said the shooter appeared to have a handgun, but Hattiesburg police declined comment on the type of gun used in the shooting. She added that he was not wearing any type of mask, just a hat.
Mussiett said the shooter fled through a door in the back of the restaurant, and a bartender followed him and kept him in sight until Hattiesburg police arrived.
Ricardo Mussiett said six employees and an unknown number of patrons were in the restaurant at the time of the shooting.
Posted by Loren Coleman at 3:06 PM