May Day is a traditional day for pagan, political, and power events of all kinds. The ancient Celtic fertility holiday celebrates the rites of Spring with much frolicking and fun. May 1st is also traditionally recognized as International Workers’ Day. 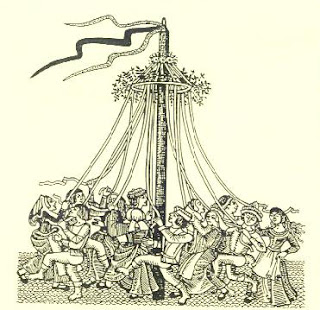 In 2012, expect something a little more than usual. Do not be surprised by what you discover occurring on this first Tuesday in May this year. Get ready for Occupy Beltane. 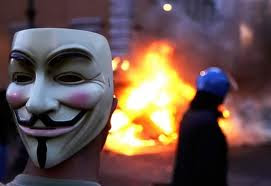 Bloomberg News states, "Calls for a general strike with no work, no school, no banking and no shopping have sprung up on websites in Toronto, Barcelona, London, Kuala Lumpur and Sydney, among hundreds of cities in North America, Europe and Asia."

The conservative CNS News reported on April 19th: "As part of Occupy Wall Street’s call for a nationwide 'general strike' May 1, elements within the group are looking to shut down bridges and tunnels in both New York and San Francisco. Occupy Oakland, the most radical of all the local Occupy groups, passed a resolution April 15 that vows to shut down all travel from Marin to San Francisco." 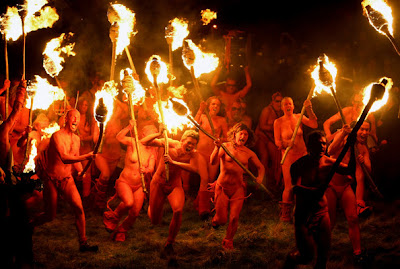 What I shall call "Occupy Beltane" events are planned in 115 cities throughout the U.S., from college towns such as Amherst, Massachusetts, and Ann Arbor, Michigan, to Los Angeles, Houston, Chicago and Philadelphia. 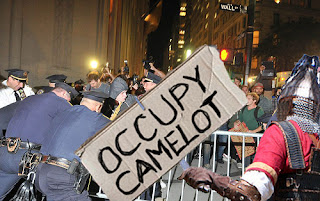 Pay attention to what landmarks get the media spotlights: the Golden Gate Bridge, the Brooklyn Bridge, the Holland Tunnel, and other symbolic (phallic) sites. Or as Adam Parfrey points out to me, the "new World Trade Center will be erected." 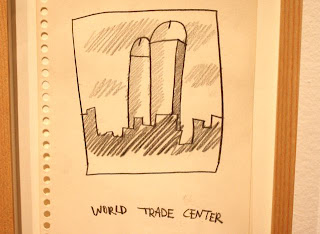 
At this time, it is unclear how involved (if at all) the movement Anonymous will be in the May 1st events. 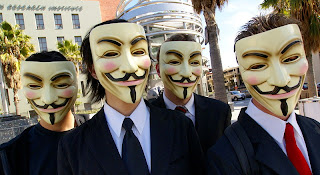 Anonymous at Scientology in Los Angeles

Beltane or Beltaine (/ˈbɛlteɪn/) is the anglicised spelling of Old Irish Bel(l)taine or Beltine (modern Irish Bealtaine [ˈbʲal̪ˠt̪ˠənʲə], Scottish Gaelic Bealltainn [ˈbʲal̪ˠt̪ˠənʲ]), the Gaelic name for either the month of May or the festival that takes place on the first day of May. 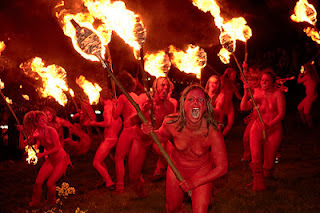 Beltane is the time of the May Pole, the ultimate phallic symbol, celebrating the fertility of both the earth and of mankind. It is a time of sexual liberation, of love and growth. It is the youth of the year, and like any youth, it is fertile and sex is on the brain. This year, it will be a time for more. Although the planners are not talking about it, the significant of "fire" behind the day may not be denied.


Whether the name of the day is translated as "shining fire" or "Beli's fire" is uncertain; the Welsh name for the day is unhelpful--Calan Mai, which simply means "First of May."


The Beltane fires were lit on the hill of Uisnech; according to the text The Fitness of Names, the practice was begun during the age of the Nemedians, by the druid Mide; it, like the Samhain fire, became the source for all the fires of the season. It is said that the druids would drive cattle through two bonfires on this day in order to prevent disease.

Watch the name games too.

I'll be watching the "fires" (whatever that might mean) during this Occupy Beltane moment.

Anniversary Footnote:  United States President Barack Obama took to a White House podium a year ago on May 1st, to tell the world that al Qaeda leader Osama bin Laden had been killed. Osama bin Laden was killed in Bilal Town, Abbottabad, Pakistan, on Monday, May 2, 2011, shortly after 1:00 am local Pakistani time by DEVGRU/SEAL Team 6, a United States special operations military unit. Threats of terrorist incidents from a weakened al Qaeda have been mentioned for May 1st, American time. Few officials publicly feel such attacks will be carried out.

IMO Beltane also seems to have a 'name-game' link with bells: the ringing of the bell, the vibration that's carried out after an initial act of violence. The call of a bell, which can be used as a warning sign, as well as a cause for joy and merry.

good info., but i would be sure to use the word 'allegedly' when it comes to the 'story' of OBL's capture/death/burial...