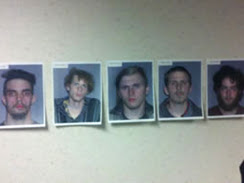 The first major national story tied to a timing on May 1st (see Occupy Beltane) comes from Cleveland and the Cuyahoga Valley.

Five alleged plotters (three described as anarchists) have been arrested on suspicion of conspiring to use explosives to destroy a bridge near Cleveland, Ohio, the FBI said Tuesday morning, May 1, 2012. The alleged attack was aimed at the Cuyahoga Valley Scenic Railroad Brecksville Station bridge. The final plan allegedly named the Route 82 Brecksville-Northfield High Level Bridge, which crosses from Brecksville to Sagamore Hills, as the target.


The men considered a series of plots over several months before deciding to target a Route 82 bridge that crosses from Brecksville to Sagamore Hills over the Cuyahoga Valley National Park, the FBI said in a news release.

"The public was never in danger from explosive devices," the FBI said in a news release. The defendants were "closely monitored by law enforcement," and the explosives planned in the operation were "inoperable and posed no threat to the public," according to the release.

Fox News reported it is unknown if the bridge incident was connected to Occupy Wall Street's plans for nationwide protests Tuesday.

At the news conference held at 10 am on Tuesday, the FBI said distracting smoke bombs were to be set off, and with the initial idea to have corporate signs on top of Cleveland buildings bombed. Later, the bridge bombing plan was put into place.

"Cuyahoga" is usually said to mean "crooked river." The history is a bit more complex. The river has had many spellings for its name which is translated into numerous meanings.

“Cayagaga” was the first name by which the Mohawk Indians (who are in the Iroquois Nation) designated the stream that sprang from the northern part of what is now Portage County and proceeded west and south through the gorge and over the falls called “Coppacaw” to the junction with the Little Cuyahoga, and then north again to enter into the lake later to be known as "Erie."

This explanation of the word meaning "crooked" from which Cuyahoga Falls got its name, was given by James Smith. James Smith was captured by the Indians in 1755 and escaped in 1759. He writes of one of explorations of the area, "We turned up the Cayagaga and hunted for several days until we came to the junction in the Cayagaga. The upland is hilly and second - and third-grade land; the timber chiefly black oak, white oak, hickory, and dogwood."

An educated Seneca Indian (another Iroquois Nation group) claimed that the name "Cayohaga" meant to the Senecas "The Place of the Jaw Bone," and was thus applied to the river and the locality of Cleveland, because in the dim past before the Whiteman came, the jaw bone and other portions of a mastodon were found near the river about five miles from its mouth."
Posted by Loren Coleman at 11:03 AM

What do you wanna bet that this ends up like all the other supposed terror plots where the FBI coaxes stupid people into saying they will commit such acts?

How the FBI’s Network of Informants Actually Created Most of the Terrorist Plots “Foiled” in the US Since 9/11
http://motherjones.com/politics/2011/08/fbi-terrorist-informants
http://www.alternet.org/story/152670/how_the_fbi’s_network_of_informants_actually_created_most_of_the_terrorist_plots_”foiled”_in_the_us_since_9_11?page=entire

Targeted and Entrapped: Manufactuing the “Homegrown Terror Threat” in the United States
http://www.chrgj.org/projects/docs/targetedandentrapped.pdf

Jaw bone? that reminds me of Cain & Abel.

And isn't lake Erie a hot spot of UFO activity, too?

I think that there is more truth to the history and spellings of the Cuyahoga than to a "bomb" plot. We will see if this does not post it is another propaganda piece. FBI set these kids up like all the other BS terror attempts. An underwear bomb got on a plane all by its self.(no one wearing) These kids wanted to vandalize bank signs until the good old FBI convinced them, trained and supplied them with the fake bomb. Can anyone say "entrapment"? I also feel if these kids are charged with attempting to blow up a bridge than they should sue the FBI for misrepresentation and forgery as well as complicity to commit a crime. (blow up the bridge as it was their idea) NO ONE IS ABOVE THE LAW. That is why we have entrapment laws, these treasonous agents need to be arrested and charged. OMG it would be a shame if the publicly funded and privetly owned Cuyahoga valley train could not get through.