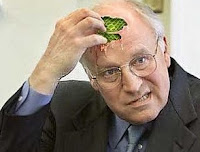 This is not going where you think it is. I have not joined the Icke fringe, seriously.

Back in 2006, I discussed "The Evolution of Cryptozoology Drawings." I found that initial eyewitnesses’ attempts to capture what they saw did change through the artwork created by later illustrators, some with their own agendas, and sometimes through the retellings of the witnesses. I spoke on this issue at the original Texas Bigfoot group’s early 2005 conference and at the Bates College’s cryptozoology symposium held in October 2005 in Lewiston, Maine. It may be appropriate now to look at another issue in a related realm. First, two questions: What if eyewitnesses who are describing Bigfoot are not actually seeing what they think they are? Do we know what happens in a Sasquatch encounter is correctly be referenced for us via the human eyewitnesses?

The example of the Pascagoula Critters, which, by definition, are part of ufology might not seem like a good place to start talking about the eyewitness testimony of Bigfoot witnesses. But there are lessons to be learned here, and perhaps it is time for Sasquatch investigators to look for some comparable data to inform our cryptid pursuits. Physical evidence is important, but then so too is the tricky world of firsthand encounter (eyewitness) sighting data, as well. Regarding the Pascagoula case, University of California professor James Harder investigated the story, as did Dr. J. Allen Hynek, who represented the U.S. Air Force. Harder and Hynek worked together on the case. First they interviewed the two fishermen eyewitnesses, Calvin Parker, 19, and Charles Hickson, 42, together. Harder tried to do regressive hypnosis on Hickson, but the alleged abductee was so frightened that the hypnosis was stopped. Both of the witnesses, however, took polygraph tests, and both passed without a problem. Harder and Hynek both believed that the two tormented men were telling the truth. What occurred with the depiction of the Pascagoula entities leads to similar insights as what I described in "The Evolution of Cryptozoology Drawings" for the changing view of Momo (the Missouri Monster).  For the Pascagoula experience, from the supposedly "based on the eyewitness" drawings to their morphing into popular cultural comic books, shiny figurines, and one-of-a-kind art, the evolution of these "critters" is somewhat predictable.


From the Air Force's investigations' images...

...to the following comic book graphic of the event which does demonstrate that some leaps are big ones.

What were eyewitnesses really seeing? Will we ever know?

What did the eyewitnesses experience? Various artists have similar but different views.

Harry Trumbore's drawing is generally regarded as bringing together many of the elements of the eyewitness descriptions and other artists' interpretations. Trumbore's image below was first carried in Patrick Huyghe's 1996 edition of The Field Guide to Extraterrestrials.

Then there are the 3-D figurines...

But something else is going on too. In Patrick Huyghe's The Field Guide to Extraterrestrials there is an investigative incident that needs to be reviewed and reflected upon. Richard J. Boylan, Ph. D. is a behavioral scientist, anthropologist, and certified clinical hypnotherapist. He has been involved in hypnotizing ufo abductees. What he found is worth pondering. On page 131, Huyghe writes of how an eyewitness under hypnosis told "Richard Boylan that she had encountered a 'spaceman.' When he invited her to look closely at the face of the 'human' spaceman, she replied, 'Oh my! It's not human after all. It's one of those Grays.' But when he suggested that she look closely at the face of the Gray, she realized that the Gray was actually a reptoid." 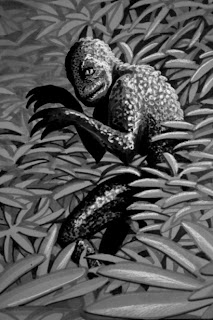 Wetzel’s “It” by Bill Rebsamen from Mysterious America (page 273).

Now, I am not here to dwell on reptilians or aliens or ufonauts. My concern is with eyewitnesses. What are they seeing, and when they see Bigfoot, are they so scared or in shock or in trance that they are telling us what we want to hear? Or what culturally they "think" a Bigfoot looks like? What would occur if Sasquatch encounters were examined more deeply by hypnotizing the eyewitnesses?

What happened to the use of hypnosis in earlier Bigfoot investigations? Should we even broach this critical forensic difference between ufological and cryptozoological eyewitness stories? Within murder investigations, criminal reconstructions, and, yes, ufological and abduction research, the frequent use of the technique of hypnosis appears to have become divorced from the examination of Bigfoot eyewitnesses. Why? We aren't sure why this occurred. Indeed, considering that even in homicidal and violent crime cases where court admissibility of evidence obtained through this method is not regarded too highly, it is in the data gathering phrase of the investigation where there is great reliance on hypnosis to collect the details of the cases. Bigfoot researchers, in the 1970s, experimented with hypnosis, but not in any well-crafted fashion. What would Bigfoot researchers find behind the sightings of large hairy creatures if they used hypnosis more? More details, more psychology, more hidden messages, or nothing? Are we even asking the right questions?
Posted by Loren Coleman at 6:49 AM

I remember reading in one of Vallee's books how he speculated that aside the usual objections being given to the employment of hypnosis that could contaminate the memories of the witness through the use of leading questions, that there was also another possibility that would lead to contamination: the non-verbal transfer of the expectations of the enquirer into the mind of the hypnotized subject --in other words, telepathy.

What would happen if the therapist is someone convinced all Bigfoot sightings are hoaxes? would the witness 'remember' through the hypnosis that the hairy creature it saw was actually a man in a gorilla suit? Would the witness even remember seeing the zipper line in the Bigfoot's back?

So, I really don't know if hypnosis would be a valuable tool to gain more data in Cryptozoology.

But there's another thing: Do Cryptozoologists bother to re-visit witnesses after 10, 20 or 30 years, to find out how much the sighting of an alleged unknown creature has influenced in the lives of the witness? I think the only ones who have been interviewed so extensively have been Albert Ostman and Robert Gimlin, and the focus of those interviews have only been to test the deviation in the original accounts through the pass of time.

PS: Here's another modern interpretation of the Pascagoula creature.

I would like to say. This whole story is so far from the truth for me. Since I saw both. I saw my first alien when I was 12. I saw a bigfoot when I was 48 years old. Then combined I spent many years doing UFO resaech and was able to see many creatures.
My good friend was working with Susquatch for over forty years. he was with different kinds. What ever one is suggesting never had a experience.

I agree that our perception of an incident can change over time. I also agree that our experience can be contaminated by others. So too can we be confused by what we have seen and misinterpret the evidence. But for those who have a close encounter with either BF or EBE it is less of a challenge to keep the facts of the encounter clear in one's mind. Unless you subscribe to the theory that such creatures can manipulate memory. Then, I guess all bets are off.

Please note, I am the photographer who snapped the image of the bright orange toy entity (with the white brick background) in this series.

I saw it in a NYC hipster toy store in the East Village. I sent the image to Mac Tonnies the same day, because I knew he would get a kick out of it.

When I saw it in the toy store I was instantly aware that it was the creature reported by Hickson and Parker. Mac also knew it too.

Mike Clelland, thanks for the message. Your photo has been duly credited now.

[Loren is it me or would Chesney look less monstrous as a reptile than a human?].

In the early nineties when I went to university as a mature student I kept running into this same guy on a several times a day basis even though he supposedly belonged to another campus doing another unrelated subject (his explanation being he too was a mature student finding his way round).

Then one day as I was going up the stairs on a bus a guy sitting at the front simultaneously got up to get off and froze on the spot in front of me.

As we both stood there his face seemed to explode in a sort of kaleidoscopic panorama then sort of flash through a series of often strange images as if looking for the appropriate face to present to me at least one of which to my shock was indeed a reptile like face.

Anyway we parted company on friendly terms but I never ever saw him again (not even at the one lecture where our different disciplines crossed over with each other).

The point is I have no problem with people seeing reptoids - I know for a FACT they bleedin' well do! - but that doesn't necessarily mean what they're actually seeing're ACTUALLY reptoids (as opposed to some neural artefact).

Which brings me to your hypnosis notion.

We're in Clovis territory here so to speak because the reason the Clovis paradigm held so long was whenever anyone suggested looking below that level the 'experts''d say but why bother since we know there's nothing there and whenever anyone DID bother and DID find something they'd say since we know there's nothing below that level you're clearly a fraud or a fool.

Some'll say it'll only muddy the waters but it may also make it easier to understand just how much perception and modulation of consciousness plays a part in these things.

And remember modulation of perception and consciousness even plays a part in such mundane activities as hunting hence hunters use of devices to make them sound like ducks etc in order to create a state of susceptibility in their prey.

ps Looking at the Pascagoula Critters I'm minded of humanoid cactuses (even their 'space' ship has a hint of the gourd) and find myself wondering if Parker and Hickson had a run in with something more akin with Kachinas than 'men' from another planet.

You might be into something. The Pascagoula beings remind me of Castañeda's Mezcalito. And if you listen to Allen Greenfield in this interview with Adam Gorightly, you'll find that river is something of a window area.

I've enjoyed the Pascagoula story since I first read it (although the witnesses certainly do not), it stands as one of the best of the 'high strangeness' catagory. Another one is the Voronez, Ukraine encounter (sp) where a group of school children were basically accosted by a pair of pin-headed giants with a robot sidekick.

(You could hardly WRITE this stuff)..

But I too thought of the Kachina connection, and Casteneda's descriptions of Mescalito could possibly be included too.