After hearing sports news commentators talk about a subject they are misreading, it is time to revisit the subject of Junior Seau's suicide. Speculation is one thing, and has been wild. But there is no reason to not look at his suicide based upon science.


Much decoding occurs when forensically examining suicide after the fact, of course, and no one really knows what a suicidal individual is thinking. Their thought processes are confused, so for relatively normal human beings to try to figure out what caused the suicide is difficult. Nevertheless, from the research, interviews, and decades of suicidology (the formal study of suicide), a few insights can be shared.

One of the most common items heard from sports newscasters and sports talk radio personalities when talking about the topic of Junior Seau's suicidality has been this kind of comment, "All those who knew him said he has been so cheerful in recent weeks; certainly this means he's wasn't suicidal."

Not true. Suicide is about an escape from the pain, real or imagined, in the suicidal person's life. Once the desire has been made to take one's own life, the suicidal individual often exhibits an unusually notable upturn in their mood, a time of what I call "suicide euphoria."

Here is what I wrote for the State of Maine about the relatively unknown condition of "Suicide Euphoria":

Sometimes depressed, despondent, angry, or agitated individuals consider, and then finalize, suicidal thoughts that may become a defined “suicide plan.” Once this occurs, the behavior in a potentially suicidal person may appear as “suicide euphoria” by an observer. This “feeling” of great happiness or well-being is based on the idea that very soon “no pain” will exist for the suicidal person. This state of euphoria may fool helpers and gatekeepers who are thinking that a “flight into health” is taking place for the individual. Friends and families of suicide victims are often confounded with a sense that this was not a suicide because of the cheerfulness of a person expressing this euphoria. When the action of suicide is planned, the vulnerable person may actually be appear calm, and demonstrate short periods of hard to understand happiness.

Junior Seau's suicide was thoughtfully completed. He called his children and left goodbye messages of love to them.

Methods and timing of suicides are important clues to decoding suicides. Seau's choice of the high lethality method of a gun, combined with the specific placement of the shot to his chest, was a direct copycat of the suicide of David Duerson on February 17, 2011. Duerson inflicted a self-inflicted gunshot to his chest and sent a text message to his family saying he wanted his brain sent for research to the Boston University School of Medicine to study it for chronic traumatic encephalopathy (CTE) caused by playing professional football.

Seau purposely shot himself in his chest to make certain his head (and thus his brain) was not damaged, so testing could occur. He was sending a nonverbal message to his family and friends. 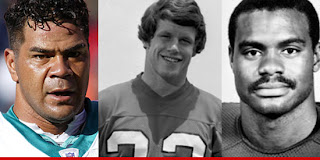 It also, no doubt, was not lost on Seau that on April 19, 2012, ex-NFL football player Ray Easterling killed himself.

The timing of Junior Seau's previous suicide attempt is telling, as well, that Seau was aware of the deaths of his peers. Seau drove his white Cadillac SUV off a coastal cliff at Carlsbad, California hours after he was arrested on suspicion of domestic violence, on Monday morning, October 18, 2010. It is to be noted that NFL player Kendrick L. McKinley had killed himself on Monday, September 20, 2010, exactly a month before Seau's probable attempted suicide.

His suicide has resulted in some good insights from a few writers. But most have added more confusion than clarity.

Suicide euphoria, behavior contagion, and copycat behavior are all underpinnings of the Junior Seau suicide that are being ignored in mainstream sports discussions of this self-death. Seau's suicide will not be the last among former NFL players, and this will be especially true if people don't get the message he was trying to send.

There is a map among these deaths, and it is time to start reading it.

++++
For first timers here, I know a bit about suicide. I have directed a few federal research projects on the topic, directed some documentaries on the hidden warning signs, written a few books (e.g. Suicide Clusters) and manuals on suicides and suicide prevention, and delivered trainings and consultations to over 10,000 professional and paraprofessionals about the factors in prevention and postvention events related to self-deaths. 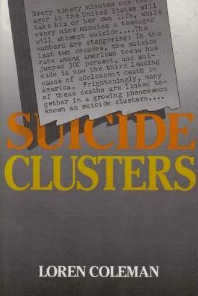 Previously, my research on baseball suicides was highlighted in "Donnie Moore and the Burdens of Baseball," New York Times, July 30, 1989, and "The Moore Tragedy," Sports Illustrated, July 31, 1989. Just as Major League Baseball did in 1989, NFL football is now in a similar period of deep introspection.
Posted by Loren Coleman at 11:22 PM

A match burns most brightly in the last few seconds because much of the spent energy goes into pre-heating the next bit of fuel to burn. In the last seconds of combustion there is no more fuel to preheat. Likewise, in the last days of a painful life there is the pleasant prospect of "no more pain."

Until distressors are reduced/eliminated and suicidality causative factors are adequately addressed in timely treatment as opposed to the current mode of incarceration and intrusive observation sans care, people will continue to attempt to end intolerable distress via suicide.

What is over-looked by everyone is the peer-pressure, or lemming effect. Once the subject gets talked about, then there is a switch flipped in the person's brain that says, I'm like them, so I may end up like them. The more they think it, the more likely it is to happen. It's almost the same as a fad, only it is a terminal fad.

Anonymous' "lemming effect," of course, has not been "over-looked."

This is another name for behavior contagion that I discussed in describing David Phillips' Werther Effect in my 1987 book Suicide Clusters and in my 2004 book, The Copycat Effect. Malcolm Gladwell popularized the concept in his 2000 book, The Tipping Point, regarding music, products, and other trendy fads.

Thanks for the hyperlink. Glad to see that you thought I had some good insights.