Iran and Preakness: Seven Days In May Again 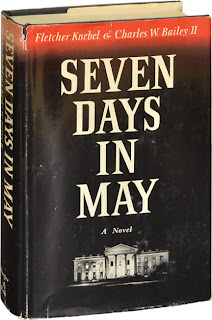 As I mentioned earlier, Seven Days in May is a tale of the attempted overthrow of the United States of America. The book has been described as realistic, prophetic, and a page-turning tale of conspiracy at the highest political levels. The story is set to a background conflict occurring between Russia and the United States in...Iran.

Both the fictional book (1962) and movie (1964) Seven Days in May, employing twilight language, utilizes coded messages hidden in conversations about horse race betting and the running of the Preakness. So let's play this out.

Now, on the threshold of the Preakness (see here for name game for this moniker), which will run on May 19th, the news is filled with Iran. (But nothing will occur, yet. It is too soon, but the rumors of war are real, nevertheless.)

The map of Iran at Wikipedia.
Iran, officially the Islamic Republic of Iran,
is a country in Southern and Western Asia.
The name "Iran," which in Persian means "Land of the Aryans,"
has been in use natively since the Sassanian era. Wikipedia

Rick Gladstone at the New York Times notes on May 18th that Iran is upset with Google:

Incensed over what it views as a Western-Arab plot, Iran on Thursday threatened to sue Google for deleting the name Persian Gulf from its online mapping service and leaving the body of water nameless. Iran’s Foreign Ministry spokesman, Ramin Mehmanparast, was quoted by the state-run news media as saying that Iran had already warned Google of possible legal action and “serious damages” if the Persian Gulf was not identified as such.

Also, on Friday, the Jerusalem Post reports on the "Iranian threat":

Prime Minister Binyamin Netanyahu on Friday dismissed a new surge of optimism in the international community that Iran might be prepared to halt its nuclear program.
"I have seen no evidence whatsoever that Iran is serous about stopping its nuclear weapons program," Netanyahu said at the tail end of his meeting in Prague with the president of the Czech Republic, Vaclav Klaus."...
"Iran is good at playing this chess game. They know that sometimes you have to sacrifice a pawn to save the King," Netanyahu said.

But finally, a hint of the future may be in the new silence discussed also on Friday, at ynetnews:

In news published already on Saturday, May 19, 2012 in The Australian, we have this "Hands off Syria and Iran: Russia":

Russia has made clear it will not support any Western military intervention in Syria or Iran, warning that such a course could lead to nuclear war. In Moscow's strongest declaration to date, Russian Prime Minister Dimitry Medvedev said the two countries should be allowed to sort out their own affairs, signaling that the Kremlin's resistance to any intervention was hardening.

The when is not going to happen in the spring. Look to an fall mission, even an October surprise.

And where will the first strike occur? The answer there more certain.

Probably at the Iranian nuclear facility at Fordu, Fordo, or Fordow (Persian: فردو‎, also Romanized as Fordū and Fardū; also known as Ferdows): 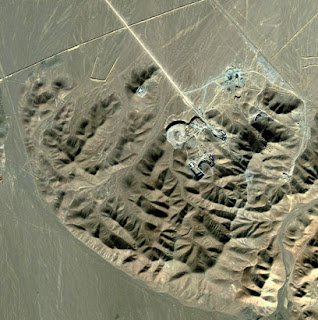 Fordo is a village in Fordu Rural District, Kahak District, Qom County, Qom Province, Iran. At the 2006 census, Fordo's population was 732, in 230 families.

Fordo, Fordu, Furdu or Fardu is a village with more than 100 houses, at the headwaters of the Furdu river, and a Kuhistan subdivision of Qom. Fordo is 26 miles to the south of Qom. Fordo is situated in a deep glen between Hasan Aqa and Furdu peaks. Fordo's sheep are celebrated for their milk.

Fordo is located near the deeply holy city of Qom. Qom is considered holy by Shi`a Islam, as it is the site of the shrine of Fatema Mæ'sume, sister of Imam `Ali ibn Musa Rida (Persian Imam Reza, 789–816 AD). The city is the largest center for Shi'a scholarship in the world, and is a significant destination of pilgrimage. Iran's Cultural Heritage Organization lists 195 sites of historical and cultural significance in Qom.

The Village of Fordo is believed to have the largest percentage of fighters killed in the Iran–Iraq War, lasting from September 1980 to August 1988.

In September 2009, it was revealed that Iran had placed a second uranium enrichment plant near the village of Fordo, that was carved into a mountainside south of Tehran. Google Maps satellite images (see above) for the Fordo site can be found at coordinates 34.885649,50.99669. Images zoomed to the 20 meter level show a large double fence perimeter border erected around the site with towers located every 25 meters. Six 10 meter wide entry portals to the underground complex are located within the fenced area, as well as several buildings, the largest of which is approximately 5500 square meters.

Why is there a rush to attack the Fordo plant? Because, apparently, the Iranians are working to bury it under that nearby mountainside.

An archaic English definition of "fordo" is "to do away with," "destroy," and "to ruin."

The favorite horse for the Preakness? Bodemeister. [Update: Bodemeister came in 2nd. I'll Have Another, who won the Kentucky Derby and also won the Preakness. is owned by John Paul Reddam.] 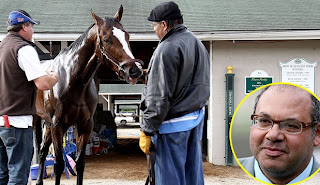 Bodemeister is co-owned by Zayat Stables, founded by Ahmed Zayat who was born in Cairo, Egypt. At the age of 18, he moved from Egypt to the United States. He got his Master's degrees in business and public health from Boston University and Harvard University. He currently lives in Teaneck, New Jersey with his wife Joanne and his four children, and has residences in New York, Egypt and London. While working for Heineken International, Ahmed Zayat created a non-alcoholic beverage enterprise called the Al Ahram Beverages Company. He sold the product to Heineken International for about 280 million dollars after turning it into the largest beverage manufacturer and distributor in the Middle East.

Bodemeister's other co-owner? Southern Equine Stables in Lafayette, Louisiana, owned by Michael Moreno, who moved from Houston to Lafayette in 2007. Moreno owns and runs Dynamic Industries, Inc., an oil and gas company, with ties to projects in Nigeria, Angola, Venezuela, and Trinidad.

The race is afoot.
Posted by Loren Coleman at 9:36 AM

OK Twilight Language betting , I have to go for :

PRETENSION [ as in pre - tension, tension before ]

"Teeth of the Dog" as in May flowers for Summer bee-headings under the heat of Sirius.

O ate dog as a child under the tutelage of Evie aka Turdi. The dog is hungry and austerity only makes him meaner.