"Just coincidence. That's the way it goes sometimes."
~ Mark Mulder in The X-Files 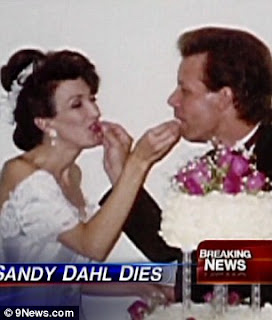 News outlets are reporting that Sandy Dahl, 52, the widowed wife of United Flight 93's Captain Jason Dahl, died on Friday, May 25, 2012. Dahl was found dead in her Jefferson County, Colorado, but the details of her death were not formally released. Her charity is reporting she died in her sleep of "natural causes."

"Sandy and Jason Dahl were my best friends," said Dosch, who also works at the scholarship fund.

Jason Dahl was piloting United Flight 93 on September 11, 2001, which crashed in a field in Shanksville, Pennsylvania. It is believed that passengers aboard United Flight 93 stopped a plot by terrorists to pilot the plane through the U.S. Capitol dome. The passengers' and surviving crew members' efforts are credited with eventually causing the plane to ditch and crash in the Pennsylvania field.

In an interview last year on the anniversary of 9/11, Stacy Dahl wore their wedding ring.

"I do think about him every day," she told KMGH. "The reason I am doing this (interview) today and the reason that I do this at all is to make sure he is never forgotten."


Jason Dahl and 9/11's Flight 93
Stacy Dahl and her husband lived in Colorado. But Jason Dahl grew up in California. He learned to fly early. At 13, the San Jose, California, native joined the Civil Air Patrol and earned a scholarship for flying lessons. He was flying solo before he was 16, and while working at the municipal airport he grabbed all the flight time he could, including flying photographers over the area.

Immediately following his graduation from San Jose State University in 1980 with a degree in aeronautical engineering, he became a corporate pilot. By 1984, he was a pilot with United Airlines.

Popular with his fellow pilots, Dahl endured good-natured teasing about his height -- he stood a shade under 5 feet, 6 inches. He and another pilot used to stand on the tips of their toes for photos to make themselves appear taller. 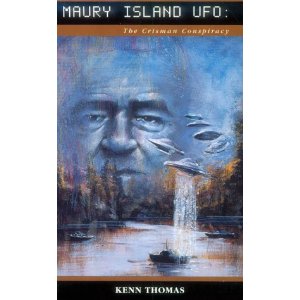 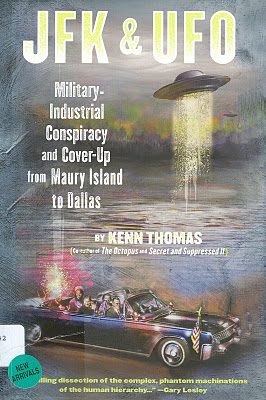 You may vaguely remember the name "Dahl" as being a significant one in the early history of ufology, linked to what is called the "Maury Island Incident," as well as connected to the JFK assassination.

The incident took place shortly after June 21, 1947. On that date, seaman Harold A. Dahl, out scavenging for drifting logs, claimed to have seen six UFOs near Maury Island (which is now a peninsula of Vashon Island, in Puget Sound, near Tacoma, Washington, United States; Maury Island is located directly across a narrow section of Puget Sound from Sea-Tac International Airport and Boeing Field).

Dahl, his son Charles, an unnamed hand and Dahl's dog were on the boat. Dahl reported seeing four, five or six (the initial FBI report says four or five) "doughnut-shaped objects" flying in formation over the area where his boat was. He said he could see blue sky through the holes in the center of the discs, and that there appeared to be port holes lining the inside of the ring. One of the craft appeared to be malfunctioning, Dahl reported, and another craft edged up to it, then retreated.

At this point the troubled craft began ejecting objects through the inner port holes. Slag-like material began hitting the boat and damaged the windshield, the wheel house and a light fixture, and killed his dog on the deck. He said his son was also slightly injured by falling debris. Dahl claimed to have taken a number of photographs of the UFOs, and recovered some type of slag ejected from the craft that malfunctioned. Dahl also recovered samples of sheaves of lightweight white sheets of metal that fluttered like "newspapers" out from the inner ring of the troubled UFO to the ground.

The next morning, Dahl reported a man arrived at his home and invited him to breakfast at a nearby diner; Dahl accepted the invitation. He described the man as wearing a black suit and driving a new 1947 Buick (classic Men in Black details). Dahl assumed he was a military or government representative. Dahl claimed the man told him details of the UFO sighting while they ate, though Dahl had not related his account publicly. The man also allegedly gave Dahl a non-specific warning which Dahl took as a threat that his family might be harmed if he related details of the sighting.

Some confusion and debate over Dahl's statements have occurred. Dahl later claimed the UFO sighting was a hoax, but has also claimed the sighting was accurate, but he had claimed it was a hoax to avoid bringing harm to his family. There also was the crash of a military plane allegedly carrying the ufo/slag sample, and the death of military personnel. It is a complex story. 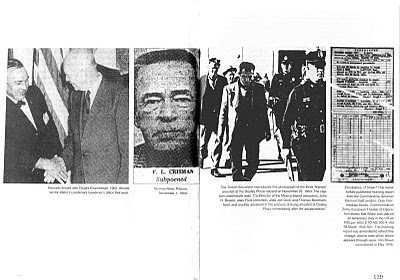 Dahl had involved his boss, Fred Crisman in looking into the matter. Dahl brought his partner, Fred Crisman, down the next day to see yet another UFO. The Maury Island incident, even before the Kenneth Arnold "flying saucer" sighting on June 24, 1947, became the first UFO event of the modern era.

In 1968, New Orleans district attorney Jim Garrison subpoenaed Fred Crisman as part of his investigation into the JFK assassination, which became the subject of Oliver Stone's 1992 movie JFK. Garrison believed that Crisman was the infamous grassy knoll shooter. He's also the central figure in the "Mystery Tramp" photo of the Dallas rail yard hobos, according to some researchers.

By coincidence, on Thursday, May 23rd, Thomas and I were discussing the overlap between the Men in Black motif and the historical links to Dahl-Crisman and the "three tramps" picked up near Dealey Plaza and the Grassy Knoll on November 22, 1963, in Dallas, immediately after John F. Kennedy was assassinated.

Thomas emailed me late on Thursday: "Last footnote for today: one of the three tramps in Dealey Plaza, officially, was named Harold Doyle--sounds like 'Dahl' when spoken with a Texas accent. And there were three tramps, as in the MIBs who travel in threes. So it's truly a weird connection that the victim of the first MIB encounter, Harold Doyle, is suspected of being part of the three man team at Dealey Plaza." 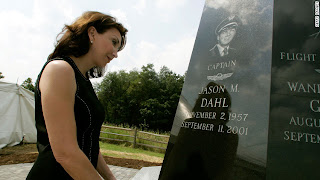 Posted by Loren Coleman at 2:38 PM