The Kennedy Curse has struck again, the tabloids will tell us tomorrow. Oops. Hold that. The phrase the "Kennedy Curse" has gone rather mainstream, it appears. 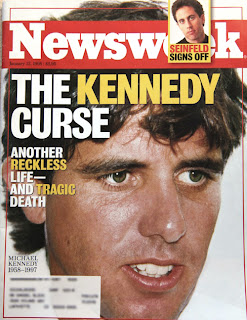 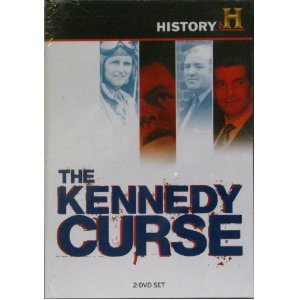 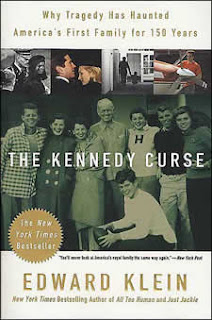 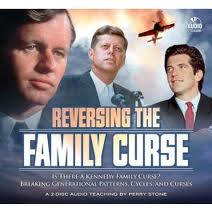 Sadly, whatever is occurring, synchromystical or not, the news is that another tragedy has hit a very public family. And children have lost their mother. 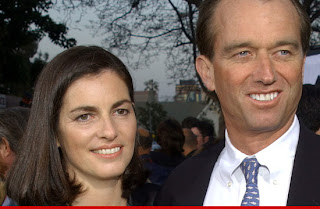 Mary Kennedy, 52, the estranged and troubled wife of Robert F. Kennedy Jr. was found dead of suicide by hanging, on Wednesday, May 16, 2012, in an out building on the grounds of her Mount Kisco, New York home. Police responded to a home in a leafy section of South Bedford Road at 1:36 p.m., according to a statement released by the Bedford Police Department. (Mount Kisco is a community that is both a village and a town in Westchester County, New York, United States. The Town of Mount Kisco is coterminous with the village. The population was 10,877 at the 2010 census.)

Robert Francis Kennedy, Jr. (born January 17, 1954) is an American radio host, activist, and attorney specializing in environmental law. He is the third of eleven children born to Ethel Skakel Kennedy and Robert F. Kennedy (assassinated in 1968) and is the nephew of John F. Kennedy (assassinated in 1963) and Edward M. Kennedy. Kennedy co-hosts Ring of Fire, a nationally syndicated American radio program.

Kennedy's second wife was Mary Richardson (1960 - May 16, 2012). She was an architect and designer, and was well known to the Kennedy family before she and Robert Jr. married. She and her former husband’s sister, Kerry Kennedy, met at boarding school and she was her schoolmate’s maid of honor in 1990.

Richardson and Kennedy married on April 15, 1994, aboard a research vessel along the Hudson River. They had four children: Conor Richardson (b. 1994), Kyra LeMoyne (b. 1995), William Finbar (b. 1997), and Aiden Caohman Vieques (b. 2001). On May 12, 2010, Kennedy filed for divorce from Mary, just three days before she was charged with drunken driving. Friends told the New York Post that Kennedy grew tired of his wife’s drinking and “other problems,” which they said had grown worse.

According to the Boston Globe, the marriage was set to end tumultuously after 16 years, following her bouts with alcohol and drugs -- a battle well known to her husband, who spoke openly about his own substance abuse problems. In 1984, he pleaded guilty to heroin possession and said he was born an alcoholic. In August 2010, Mary Kennedy was charged with driving under the influence of drugs, a month before she pleaded guilty to drunken driving and had her driver’s license suspended. 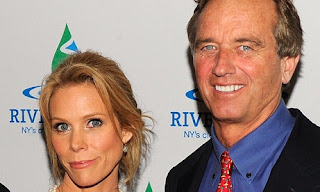 At the time of Mary's death, Kennedy was reportedly dating actress Cheryl Hines, who is known for her role as Larry David's wife "Cheryl" on HBO's Curb Your Enthusiasm. Hines' director of her then-new comic film Waitress was murdered a few months before the film was released in 2007. 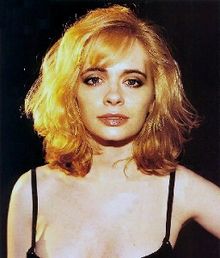 The director was Adrienne Shelly (born Adrienne Levine). On November 1, 2006, after her husband found his wife Adrienne's body hanging by a bed sheet from a shower rod in their Manhattan West Village apartment's bathroom, the initial ruling was suicide. But the NYPD were suspicious of sneaker prints in the bathtub that did not match Adrienne Shelly's shoes (she was only wearing socks). Finally an arrest was made of Diego Pillico, a 19-year-old construction worker who confessed to the murder, and admitted he was "having a bad day."

Mary Richardson Kennedy has now joined the list of what is now popularly called "The Kennedy Curse":

1941 – Rosemary Kennedy is believed to have been mentally challenged. However, some sources have claimed she was suffering from mental illness, such as depression. Because of her increasingly violent and severe mood swings, her father, Joe, Sr., arranged in secret for her to undergo a lobotomy. The surgery impaired her cognitive abilities even more, and as a result, she remained institutionalized until her death in 2005.
August 12, 1944 - Joseph P. Kennedy, Jr. died when his plane exploded over East Suffolk, England as part of Operation Aphrodite.
May 13, 1948 – Kathleen Cavendish, Marchioness of Hartington died in a plane crash in France.
August 23, 1956 – Jacqueline Bouvier Kennedy gave birth to a stillborn daughter, Arabella. (Although the daughter was unnamed and is buried at Arlington National Cemetery next to her parents with a marker reading "Daughter", later reports indicated that the Kennedys had intended to name her Arabella.)
August 9, 1963 – Patrick Bouvier Kennedy died two days after his birth.
November 22, 1963 – U.S. President John F. Kennedy is assassinated by Lee Harvey Oswald in Dallas, Texas.
June 19, 1964 – U.S. Senator Edward M. Kennedy was involved in a plane crash in which one of his aides and the pilot were killed. He was pulled from the wreckage by fellow senator Birch E. Bayh II and spent weeks in a hospital recovering from a broken back, a punctured lung, broken ribs, and internal bleeding.
June 6, 1968 – U.S. Senator Robert F. Kennedy is assassinated by Sirhan Sirhan in Los Angeles immediately following his victory in the California Democratic presidential primary.
July 18, 1969 – In the Chappaquiddick incident, Ted Kennedy accidentally drove his car off a bridge in Chappaquiddick Island, fatally trapping his passenger Mary Jo Kopechne inside. In his July 25 televised statement, Kennedy stated that on the night of the incident he wondered "whether some awful curse did actually hang over all the Kennedys."
August 13, 1973 – Joseph P. Kennedy II was the driver of a car which crashed. His passenger Pam Kelley was permanently paralyzed.
November 17, 1973 – Ted Kennedy, Jr. lost a portion of his right leg due to bone cancer.
April 25, 1984 – David Kennedy died of a Demerol and cocaine overdose in a Palm Beach, Florida hotel room.
December 31, 1997 – Michael Kennedy died in a skiing accident in Aspen, Colorado.
July 16, 1999 – John F. Kennedy, Jr. died when the Piper Saratoga light aircraft he is piloting crashed into the Atlantic Ocean off the coast of Martha's Vineyard due to pilot error.
September 16, 2011 - Kara Kennedy Allen died of a heart attack while exercising in a Washington, D.C. health club.
May 16, 2012 - Mary Richardson Kennedy, the estranged wife of Robert F. Kennedy, Jr. is found dead of a suicide at the age of 52 in an "outbuilding" on her property near Bedford, New York. (See above for further details.)

Here's one for the 'name game' file:

FBI searches for missing agent, believed to be suicidal: "FBI agent Stephen Ivens was last seen Friday at his Burbank home. He might have his gun, and dogs tracked his scent toward the Verdugo Mountains, officials say."

The Verdugo Mountains were named for Jose Maria Verdugo, holder of the Rancho San Rafael land grant, which covered the mountains during California's Spanish and Mexican periods. On October 20, 1784 Pedro Fages, the military governor of Alta California, granted Jose Maria Verdugo permission to use the rancho, known officially by the name San Rafael but informally called "La Zanja" by Verdugo. The rancho's boundaries were primarily defined by the Verdugo Mountains, the Arroyo Seco and the Los Angeles River, with the boundary following north along the east bank of the river and wrapping westerly around Griffith Park to a point near the Travel Town Museum in the park.

The name "Iven" is of French origin and generally means "Little Archer"; it is often a first name for males.

Given the large number of Kennedy progeny, it's likely that even random misfortune would seem to strike with more frequency just because there are so many of them.

But, the Kennedy men do seem to have a reckless streak that puts them in harm's way often. Maybe it stems from how the family culture defines and endorses manhood for its male offspring.