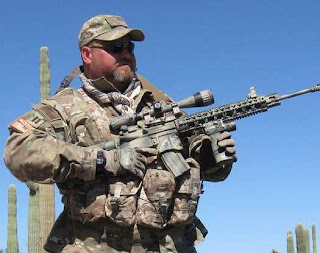 On Wednesday, May 2, 2012, a neo-Nazi militia leader killed four people and himself in Gilbert, Maricopa County, Arizona. (In 1912, many Mormons who had fled the Mormon colonies in Mexico due to the actions of the forces of Pancho Villa settled in Gilbert. Villa's skull was stolen from his grave in 1926, according to some accounts and denials, by members of Skull and Bones.)

Jason "J.T." Ready (born February 17, 1973) was a former lance corporal Marine before being demoted and discharged from the Corps for bad behavior. He had previously made headlines when he started a militia -- named the US Border Guard -- to hunt illegal immigrants and drug gangs in the Arizona desert, FOX News Channel and the New York Post reported.
Ready had also put himself forward as a candidate for the position of Pinal County Sheriff.
Ready was politically active in anti-immigration causes. He also served as president of the Mesa Community College Republican Party Club and as a precinct committeeman for the Maricopa County Republicans. In 2006, he sought a seat on the city counsel for Mesa, Arizona. He put forth as his motto that "The Purity of the Aryan Race is the most precious resource Nature has to offer All of Humankind." Ready was baptized into the Church of Jesus Christ of Latter-Day Saints (Mormons) in circa 2003 by politician Russell Pearce.
He attended and spoke at Tea Party movement events and brought his Border Guard organization to an Occupy Phoenix rally. Before his Border Guard activities, Ready had earlier led the white supremacist, neo-Nazi National Socialist Movement.

The National Socialist Movement (also called NSM or NSM88) is a neo-Nazi party operating in the United States. The group was founded in 1974 by Robert Brannen, former member of the American Nazi Party before its decline. The group claims to be the largest and most active neo-Nazi organization in the United States. Its leader is Jeff Schoep. The party also sponsors a youth activism wing called the Viking Youth Corps.
The National Socialist Movement was responsible for leading the demonstration that sparked the 2005 Toledo Riots. In 2007 many members left to join the National Socialist Order of America, which was led by 2008 presidential candidate John Taylor Bowles.
In January 2009, the group sponsored a half-mile section of U.S. Highway 160 outside of Springfield, Missouri, as part of the Adopt-A-Highway Trash Cleanup program. The highway was later renamed the "Rabbi Abraham Joshua Heschel Memorial Highway" by the state legislature.
On April 17, 2010, 70 members of the National Socialist Movement demonstrated against illegal immigration in front of the Los Angeles City Hall, drawing a counter protest of hundreds of anti-Nazi demonstrators.
In May 2011, the NSM was described by The New York Times as being "the largest supremacist group, with about 400 members in 32 states."
On May 1, 2011, Jeff Hall, a leader of the California branch of the NSM, was killed by his ten-year-old son.
The NSM held a rally on September 3, 2011 in West Allis, Wisconsin. The rally was to protest the attacks at the Wisconsin State Fair on August 5, 2011 when a flash mob of young African-Americans targeted and beat Caucasians. Dan Devine, the mayor of West Allis, stated on September 2, 2011, "I believe I speak for the citizens when I say they are not welcome here."
Each state has members in smaller groups within areas known as "regions." As a whole, the NSM has National meetings as well as smaller Regional meetings.

Jason "J.T." Ready was identified by local authorities as being responsible for the lethal shooting of four people in Gilbert, Arizona, including an 18-month-old toddler.
Ambulances and dozens of police officers were dispatched to the home in Gilbert, southeast of Phoenix, at about 1:30 p.m local time. That was 90 minutes after local police had received a call about a domestic violence incident involving Ready and his girlfriend.
Found dead alongside Ready were his girlfriend Lisa Mederos, 47, her daughter Amber Mederos, 22, and Amber's boyfriend Jim Hoitt, 22, Fox News, New York Post, and other news outlets reported. Amber's daughter Lilly, aged two, was rushed to the hospital and multiple sources said she later died.
Another of Lisa Mederos' daughters, an unnamed 19-year-old, was interviewed by authorities. Reports said she either survived the spree or was the person who discovered the bloodbath.
Two handguns and a shotgun were found at the scene. A law enforcement official said media reports that Ready was wearing body armor were false.
A motive for the violence was not known.
Posted by Loren Coleman at 6:50 AM

So lemme get this straight: this white supremacist had a Latin girlfriend??

No wonder the guy exploded. His life was a 'supreme' contradiction.

Maybe another take on this event on Veterans Today website, I hope it's ok to post the links.

I actually was going to ask about the VT take on events as well. Seems plausible given the gang problem down there.