Don't tell me that the powers that be aren't aware, moment to moment, of the significance of dates and places.

Rumors circulated all morning that President Barack Obama was in Afghanistan, was missing, and/or was in locations unknown.

The official White House schedule for May 1, 2012, was as follows: 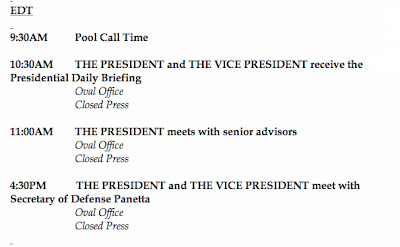 Finally, in the afternoon, the White House Press Office released the correct news: President Barack Obama made an unannounced visit to Afghanistan on Tuesday, May 1, 2012, the first anniversary of the U.S. raid that killed Osama bin Laden in neighboring Pakistan. Obama's plane left Andrews Air Force Base just after midnight Monday and arrived at Bagram Tuesday evening Afghanistan time.

The countries have been negotiating a strategic agreement that would outline the basis for U.S.-Afghan cooperation after most U.S. and allied troops withdraw in 2014. Obama and Afghanistan President Karzai signed the agreement on Tuesday, according to the senior administration officials who briefed reporters on the flight. The Strategic Partnership Agreement provides a framework for the U.S.-Afghanistan partnership for the decade following the U.S. and allied troop withdrawal.

Obama is scheduled to make a televised address to the USA at 7:30 p.m. ET.
Posted by Loren Coleman at 4:56 PM