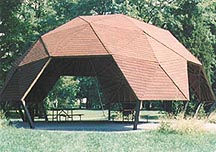 Picnic shelter, Southern Illinois University, where I received my BA in
anthropology/zoology, was built by Bucky Fuller and his students.

Once in a blue moon, all of our lives are touched by great individuals and memorable humans. I have felt that has happened to me many times. I use to be very careful about what I considered to be extensive name-dropping, but upon reflection, I am honored to have met and learned from so many notable people. And these folks are known by their works, which are remembered when we say their names. 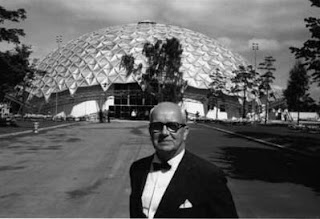 Personally I have known some distinguished researchers and chroniclers in cryptozoology, including Bernard Heuvelmans, Ivan T. Sanderson, Roy Mackal, and George Haas, as well as first-rate Fortean thinkers like Miriam Allen DeFord, Bucky Fuller, Patrick Huyghe, Mark A. Hall, Jerome Clark, Bob Rickard, Jim Brandon, Robert Anton Wilson, Vincent Gaddis, Brad Steiger, and John A. Keel, to name but a few. The same goes for the synchromystic and twilight language writers and theorists (see here), most of whom I have met and, if they are alive, am still corresponding with them regularly. (Then there are the women and children who have enriched or are still in my life, but that's for another time.)

I feel my decades here on Earth have been specially blessed and touched by hundreds of incredible Homo sapiens. I have gained so much from all of these people.

How strange it is for me to reflect on the fact that Ivan T. Sanderson and R. Buckminster Fuller (who like me was born on July 12th) actually both wrote letters on my C.O. behalf to Decatur's draft board in the 1960s, supporting our special Fortean view of the world? 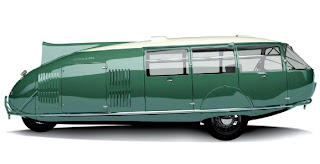 Norman Foster's Dymaxion #4 was built and then revealed during
the fall of 2010. Photo: (probably) Nigel Young.

The nearly completed Dymaxion #1, outside the Bridgeport factory, July 1933.
Fuller's three-wheeled 1933 Dymaxion had a fuel efficiency of 30 miles
per US gallon, carried 11 passengers, and
reached 120 mph. Photo: Buckminster Fuller Archives.
Should I be surprised, years later, I retain a deep fascination for Fuller's architectural designs and his forward-looking innovations as insights into the twilight nature of things from that fool on a hill?

Meanwhile, in the field of understanding the mysteries in the behavior of women and men, there is one educator whom I appreciate above all others: Sophie Freud, the granddaughter of Sigmund Freud. Between the fall of 1976 and the spring of 1978, I attended Simmons College School of Social Work in Boston.

Simmons use to be a women's college, and their graduate school in social work reflected those old roots. I was one of only 17 males among the 100 students in the MSW Class of 1978. For whatever reason, Professor Sophie Freud picked me out to be her special project. At 29, I was an older, highly experienced student and I found her interest in me fascinating. It truly was a mentoring relationship, restricted to the halls of the social work school, but she had a way of finding me in the library and talking to me often about how things were going. I also became the student newspaper editor, and she volunteered as the faculty representative, even penning some movie reviews for the newsletter. 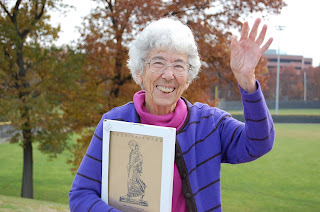 The synchromystic link with Freud continued when I was picked to receive the 1992 Simmons College School of Social Work Alumni Recognition award for writing my book Suicide Clusters (Boston: Faber and Faber, 1987). I arrived at the ceremony only to discover I was sharing the day with Sophie Freud, who was being honored for her years of teaching with a Faculty Recognition award.

Her ideas, by extension, were very Fortean and holistic, even as she screened them through a Freudian view of the world. As I noted in my book The Copycat Effect (2003: page 137),


Sigmund Freud, despite his fall from grace during the rise of feminism in the 1970s and the notion that some of his theories are sexist and outdated, had some interesting insights that inform any examination of the interplay between murder and suicide. His conceptualization of suicide was as the murder of one's self. Freud's granddaughter, non-Freudian feminist Sophie Freud, Ph.D., whom I studied under at Simmons College, said it well in her appropriately named "The baby and the bathwater" Some thoughts on Freud as postmodernist." in The Journal of Contemporary Human Services (1998). She observed that Freud's extensive work on the unconscious, however flawed, helped students of psychology to see that "surfaces mirror only one aspect of human motives, and that each visible aspects of human behavior carries within it, its opposite. The standard biography of Sophie Freud notes, of course, she is the granddaughter of Sigmund Freud (above). She was born in Vienna, Austria, and emigrated via France and Casablanca to the United States in 1942, at the age of 18. She attended Radcliffe/Harvard, and then Simmons College School of Social Work.
Freud practiced as a social worker mostly in the field of child welfare and child (parent) guidance ~ as I did, and received her Ph.D. from the Florence Heller School for Social Welfare in 1970. She then spent the next thirty years as a social work educator, chairing the Human Behavior Sequence at the Simmons College School of Social Work and taking an active part in their doctoral program. She continues to give talks through the United States, Canada and Europe, even as she nears the age of 90. 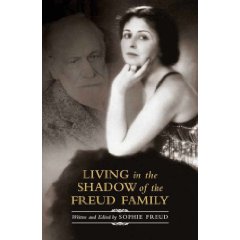 Sophie Freud is the author of books reflecting her interest in understanding her remarkable relatives.  They are Three Mothers and Other Passions (NY: NYU Press, 1991), and Living in the Shadow of the Freud Family (NY: Praeger, 2007). 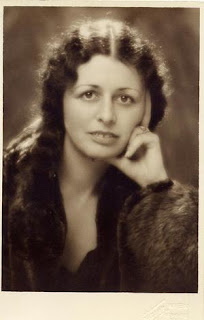 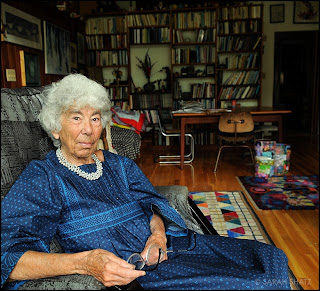 Sophie Freud keeps a cluttered collection of books and memorabilia (above),
just as her grandfather Sigmund did (seen below) on his desk and in his office during his life. 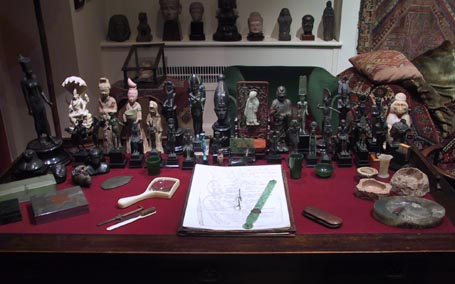 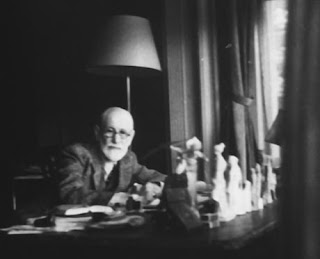 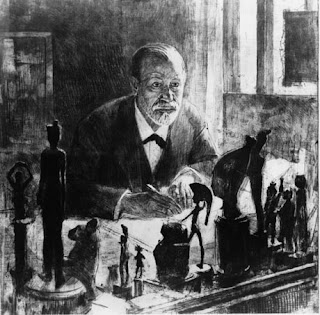 A recent article notes the achievements of Sophie's offspring whom she had with her former husband, George Loewenstein, as well as other Freud relatives:


Sigmund Freud is, of course, a household name. Also well known are Anna Freud, his youngest child and the only one of his children to become a psychoanalyst, and his grandson, Lucian Freud, one of the foremost figurative artists of the current day.But the sprawling Freud family also includes many other accomplished offspring in the fields of finance, media, politics, entertainment, academia, writing, fashion and social work.
Great-grandson George Loewenstein, for example, Carnegie Mellon University professor, is a leading authority and researcher on decision-making, currently writing a book on the role of emotions in economic behavior.
His oldest sister, Andrea Freud Loewenstein, is a novelist and literary critic, author of "This Place," "The Worry Girl: Stories From a Childhood," and "Loathsome Jews and Engulfing Women." His other sister, Dania Jekel, runs the Asperger's Association of New England. Dania Jekel's daughter, Laura A. Jekel, is a graduate student in the Carnegie Mellon music department. And Dr. Loewenstein's wife, Donna Harsch, is a history professor at Carnegie Mellon, specializing in 20th century Germany.
Sigmund Freud and his wife, the former Martha Bernays, had six children: Mathilde, Martin (the Loewensteins' grandfather), Oliver, Ernst, Sophie (who died at age 27) and Anna.
Martin Freud's wife and daughter, Esti and Sophie Freud, wound up in the United States. Most of the other Freuds fled to England from Vienna during World War II, so most subsequent generations are British. They include:
• Clement Freud (son of architect Ernst, brother of Lucian), broadcaster and Liberal Party politician who was knighted upon retirement from Parliament, married to actress Jill Freud, who is the former June Flewett, the inspiration for C.S. Lewis' Lucy Pevensie in "The Chronicles of Narnia."
• Matthew Freud (Clement's son), public relations mogul, head of Freud Communications, married to Rupert Murdoch's daughter, Elisabeth, formerly married to Caroline Hutton, who then married the Earl of Spencer, brother of Diana, Princess of Wales.
• Emma Freud (Clement's daughter), broadcaster and cultural commentator, life partner of scriptwriter Richard Curtis and chief script editor of his "Four Weddings and a Funeral," "Notting Hill" and "Bridget Jones's Diary."
• Esther Freud (Lucian's daughter), novelist, author of "Hideous Kinky" (which became a film starring Kate Winslet), as well as "The Sea House," "The Wild," "Peerless Flats" and "Love Falls."
• Bella Freud (Lucian's daughter), London fashion designer whose work is favored by celebrity clients, weekly columnist for the Sunday Telegraph.
• David Freud (grandson of Martin and son of Walter, Sophie Freud's brother), London investment banker who helped to raise 50 billion pounds for firms such as Eurotunnel and EuroDisney, Tony Blair's adviser on welfare reform, former journalist for the Financial Times, author of "Freud in the City," an inside look at high finance in the go-go '80s.

Posted by Loren Coleman at 8:52 PM

Wow! How privileged you were to have been mentored by Sophie. And as a designer I'm obviously deeply fascinated with Buckminster Fuller's work. He truly was one of the greatest architects and thinkers of the XXth century.

I'm reading Jeffrey Kripal's Mutants & Mystics, where he writes that although everybody's darling in the Fortean world will always be Jung, Freud was interested in *other* things aside from sex-based traumas. He even wrote about telepathy back in the day when such speculations among serious psychologists were still permitted.

Did you ever discuss Fortean things with Sophie?

Yes, Red Pill Junkie, Sophie and I talked of many things, including Fortean topics. I was in the midst of my graduate program studies when I undertook the Dover Demon investigations of April-May 1977. Due to the surprise widespread media coverage (Boston Globe, Boston Phoenix, Boston television stations, which went national), I could not and thus did not hide my interests. :-)

I was greatly interested in Carl Jung, also, of course. I just never met him or his kin, in the flesh.

Jerry Clark's and my first two books are fundamentally Jungian, and we are quite overt about those links to our thinking in 1974-1978.