What Purpose Are The Reptilians? 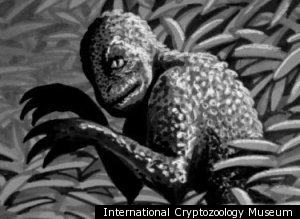 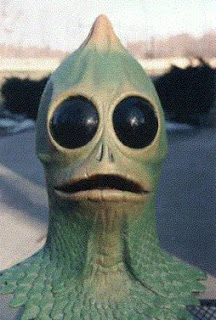 People are interested in Reptilians, Reptoids, and Reptiloids, no matter what you call them. Last weekend, I posted a thoughtful essay looking at the use of hypnosis in eyewitness investigations, entitled "Are Bigfoot Witnesses Really Seeing Reptoids?" Almost 10,000 people read it in the first 8 hours. Amazing reaction.

So why are people so fascinated by the notion of Lizard People among us? Surely, folks can't consider there is any reality to this? Skepticism and critical thinking can't be dead, can it?

I see that Nicholas Pell recently thought about this business in his posting, "The Odd Reptilian Theory and The People That Believe It."

“Some weird British writer who thinks that Al Gore is a shape-shifting, blood-sucking reptile.”

I was stumped there. 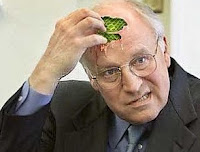 I suppose we'd find the same thing happening to Pell if "Al Gore" was replaced with the name "Dick Cheney" or "Mitt Romney." 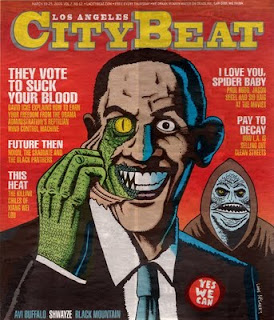 So what's going on here. After all, depending on your politics, some people think Obama is a reptoid too. 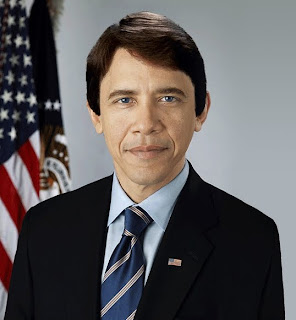 Political humor and reptoids appear to go hand in claw.


In the closely fought 2008 U.S. Senate election between comedian and commentator Al Franken and incumbent Senator Norm Coleman, one of the ballots challenged by Coleman included a vote for Franken with "Lizard People" written in the space provided for write-in candidates. Lucas Davenport who later claimed to have written the gag ballot, said, "I don't know if you've heard the conspiracy theory about the Lizard Men; a friend of mine, we didn't like the candidates, so we were at first going to write in revolution, because we thought that was good and to the point. And then, we thought the Lizard People would be even funnier."


That seems to be a key.


Reptilians equal humor. In a world in which you can daily read on the Drudge Report of bank runs in Greece or scandals of fallen Democrats, or on Huffington Post of melting icebergs or dogs being strapped to the top of cars, we all need a little comedic relief. The Reptilians give us that. After all, what if Queen Elizabeth is a Lizard Woman or the head of Facebook is a Lizard Man? Would you look at the world in a different way? 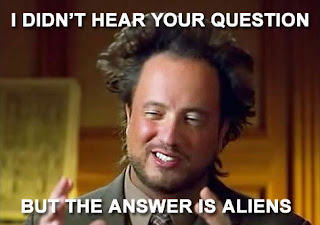 Of course, if the Reptilians are aliens, then why hasn't anyone thought about the obvious?
Perhaps Giorgio A. Tsoukalos is a Reptilian? :-) 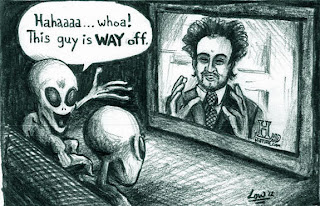 Comedic art by Matt Low, thanks to my friends on Coast to Coast AM.

It's a comedic relief, and it also gives us permission to de-humanize the figures we don't agree with.

So to a Liberal Cheney is the likeliest candidate for a Reptilian suspect, whereas a Conservative would point his finger to Obama.

It also separates us from politicians even further. Not only do we dislike them, and think they are all corrupt and self-serving, but now they are not even part of our own species!

That last part makes me suspect that the Reptilian mythos is the first visible sign of huge rift in our horizon. A huge Paradigm shift in our social system.

Why do Blair, "W", "H", "C", Condi and
Killary Killcondrome get away Scott
Free of any Alien Rectpoid Suspicion?
I read yesterday that "Bill" has very
advanced Parkensonism, so presumably
he (soon) cannot "get it up" - he
would have been far happier dropping
the Wicked Witch of the West and
eloping with Monica, back when he
was still capable of enjoying life.

Actually, I'm a conservative (not to be confused with a Republican), and I can equate BOTH sides of the fence with reptilians, not just one or the other. There's a common contempt for mankind at the tops of both major parties. "When you own all of the horses in the race, you can't lose."

There is enough data on the subject which appears world wide, and has been recorded going back a lot further then modern education even touches base on.

There is definitely some legitimacy to it.

Saying it is nonsense without even pointing out the data and refuting it on facts suggest you only wish to marginalize the idea of it without providing any rational thought provoking reason.

It is simply because you say it is.

That is using my critical thinking skills lol.

You are a bit of a fool. You posted a comment to your blog, just to get attention. Reptilians are real, and if you were real, you could look into it and find out. Been studying this stuff for over 20 years now. Reptilians are very hard to prove, but there is 250 tons of circumstantial evidence to show it is a real phenomena.

My best friend used ot attend Masonic Lodge meetings and never believed me when I would tell him about the Reptilians. Then one day, his whole life turned around when he actually met one face to face. (No this is not a joke or a spam post, i'm 100% serious). He watched the shape shifting happen in front of him. He witnessed people observing the being and not noticing it changing at all. He was 100% sober, too. Google Credo Mutwa for more info.

why is it the dickheads that mock aliens? answer. Closed minds.

>"That is using my critical thinking skills lol."

ot to mention your trolling skills, guy who posts anonymously ;)

GO to all those places where there have been reports of such things, and stay there several nights - right there in the middle where they've been seen.


Would you do that? Put your life on the line... and REALLY prove that such things don't exist!


As a beginning, you should go to Puerto Rico- that's easy enough- you don't even need a Visa or Passport.

And where the farmers - responsible, down to earth adults- NOT airy fairy, New Age believers, have SEEN the creature.

THAT would be the beginning of a REAL debunking.

england's tony blair & gordon brown were behind worldwide economic crisis that their uk government started in begining of 2008. uk is a fully responsible for the crashing of Euro because they dont like any others apart from themselves and born bred liers, divide, rule & destroy merchants, and fully and total rude natured by their makeups and ideologies ever since it came into existence on this planet and rule 99.999 percent of the earth and still are doing it by covert and overt means, wars, mass genocides, and taking other countries under their controls and dominations by their anglosexon-masonic ultra-extreme mind, soul and bodied peoples that they going to start nuclearworldwidewar by their governmental agencies of MI6, MI5, MI4, MI3, MI2, MI1, SAS, by staging a nukestrike at 2012 main olympic site which they planned in 2003 and shown it to their anglosexon publics through BBC under their TV serial called "Spooks - Code-9" and result will kill some ten thousand people of various nationalities which will create a loop hole to start nukewar beginning by destroying iran first and as the war expands to other nearby countries and eventually to a full blown worldwidenuke war whose sole responsibility lies at heart of london english government.

seems like many politicians develop some form of degenerative disease...

conspiracy theory: maybe they are dosed to prevent death bed confessions because of guilt or knowledge of the guilty. they know where the bodies are buried.

RPJ: "It...separates us from politicians even further. Not only do we dislike them, and think they are all corrupt and self-serving, but now they are not even part of our own species!

"That last part makes me suspect that the Reptilian mythos is the first visible sign of huge rift in our horizon. A huge Paradigm shift in our social system."

It's almost as if that particular type's being marked out as the 'dinosaur' of the day unwittingly in the middle of going extinct before our eyes.

So, Lucas davenport is a fictional creation of author John Sanford. His books take place in Minnesota, home of the Franken election. What's up here, Coleman? Source?

which has the story and a photograph with this caption,

"25-year-old Bemidji resident Lucas Davenport claims he was the person who wrote in Lizard People on his ballot. (Photo courtesy of Lucas Davenport)."

Wouldn't the reptiod be an archetype? I recall reading of them in many mythologies, including the Abrahamic creation mythos. (talking snake handing Eve an apple) They always seem to be lurking in our minds, much like zombies/ghouls and vampires.

Perhaps they are just our mind's way of viewing certain obstacles. We often assign meaning to random chance. Some people claim it is the work of a god or demon others claim aliens or reptoids.

As to the comment regarding debilitating illnesses in politic leaders, while interesting I would think a bullet, car, plane or other more mundane form of 'accident' would be easier and safer. After all if I knew I were going to suffer a long drawn out death, I'd write all my secrets down and make sure they got published the day my death was announced, and that is even easier to do now with the internet than it was in the past when you had to trust someone to fulfill your wishes.