As soon as the new HBO film, Philip Kaufman's Hemingway & Gellhorn began, I knew I was visually going to enjoy this experience. 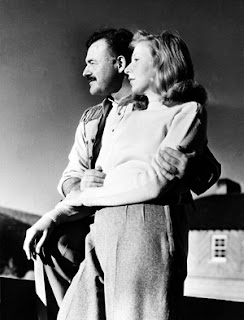 
To view this television movie, which did not seem like a small screen offering, is to travel back in time, in grays, sepias, and midcentury mosaics. The movie manifests itself as a sensory marvel.


Today's media are fixated on talking about the blindingly passionate nude scenes between Ernest Hemingway (played by Clive Owen) and Martha Gellhorn (played by Nicole Kidman). Sure, it happens as bombs go off all around them in her Madrid bed, during the Spanish Civil War. Yes, those are great minutes, to view, to take in for their pure energy, irony, and humor. But there was something else that captured my attention from the beginning, which almost sounds like one of the carefully placed clichés you hear throughout this film. Hemingway & Gellhorn demonstrates a remarkable appreciation of the minor minutia that enhanced the canvas capturing the lives of these two romantic figures.


What I remember seeing first was the incredible detail given to the eyes of the aged Martha Gellhorn. The whites of her eyes were bloodshot, as I've seen in aged writers I've known. I was surprised but somewhat expected that.  What I focussed on immediately after noticing the eyes themselves was what I saw when Kidman's eyelids naturally flicked closed for a microsecond, opened, and then would do it again, a few moments later. There was a reddish line of broken blood vessels at the edge of the lid, near the lashes. It wasn't ghoulishly overdone, as if someone had gone overboard with make-up on Kidman's elderly character. Instead, it appeared totally natural and set the stage for me to view and absorb this film, seriously. It was done on a subliminal level that appeared, literally, to counterbalance the supraliminal stimuli of Hemingway's usually overbearing life story.


The film was peppered with those kinds of moments for me.


Seeing Hemingway standing while typing or hearing him constantly calling Martha Gellhorn, "Gellhorn," were the glue that binds this film to an era. They lived in the 1940s, and that was the way it was then. Hemingway & Gellhorn painted that picture well. Another vivid image I literally loved and jumped out of my seat as I viewed it was the brief ones of the huge murals on the walls in Cuba. The war scenes were gritty; the drinking was heavy; the lovemaking was realistic. The concentration sequences were visually disturbing. I was shocked that even though I had seen Dachau images often, I found myself turning away from this horror when viewed through Gellhorn's eyes. These are the finely crafted seemingly small elements that added an unconscious richness to this movie that may only sink in during the coming days. 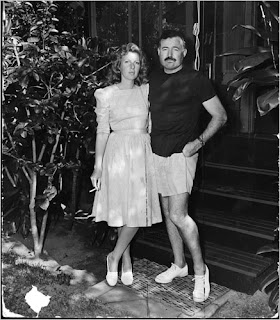 There is a scene that stands out for me. I will forever recall it as so pure, so true, and so real between this film's Gellhorn and Hemingway. It is the one where they are left sitting in the Chinese cave, after the fighters have rushed out, leaving the two alone. The interchange was intensively electric, distancing, combative, tender, and merging, so much so, that it was familiar. I've lived those moments, as a writer, with women I've loved, and Kidman, Owen, and Kaufman really got it.


I learned a great deal from the movie about Gellhorn that I never knew before. I aquired more about Hemingway's linkages and connections, which I had overlooked. The film should open the world's eyes to the greatness that lived in Martha Gellhorn.


I was constantly startled, as I watched the film, about the lacuna in my knowledge about this amazing woman. (While I'm a minor Hemingway historian, I never grew to know Gellhorn in the way this film was able to flesh her out for me. I have researched and discussed the Hemingway family history of depression, suicide, and copycat behavior. It is something that is sometimes called the "Hemingway Curse." I've appeared in documentary programming discussing it, most significantly on the September 27, 1996, episode of NBC's Unsolved Mysteries, which dealt with Ernest's granddaughter Margaux's then-recent Santa Monica suicide. I also wrote about the so-called "curse" in my 2004 book, The Copycat Effect.) How had I missed Gellhorn? Thank you, HBO.


Of course, there is one other defining event, for me, that the movie decided, perhaps correctly, to leave out. Martha Gellhorn, who never wished to be a mere footnote to Hemingway, left this world the same way Hemingway did, up to a point. Gellhorn, 89, died by suicide from a drug overdose, on the day after Valentine's Day in 1998, in London. Valentine's Day is a hard day for passionate lovers and emotional ex-lovers. She was nearly blind and had been battling cancer. Less than 20 months previously, Margaux Hemingway had died by suicide by drug overdose, her body being found the day before the 35th anniversary of Ernest Hemingway's suicide. His impact on others was great. In life and death.


If we learn of Gellhorn's legacy by way of this movie, and understand her death differently than Hemingway's, we shall honor her new-found memory properly.


Slow down. Take the time. Watch Hemingway & Gellhorn. It is playing all Spring on HBO.

"What I remember seeing first was the incredible detail given to the eyes of the aged Martha Gellhorn."

After watching the trailer, I'm confident that far more detail was given to Kidman's LIPS, and trying to digitally erase all the self-inflicted damage caused by her futile Botoxification —it is something of a pet peeve...

But after reading this wonderful review, I will look forward to catching this movie when it appears on HBO Latin America :)

I just watched Hemingway & Gellhorn this afternoon and I have to say that this film is artistically daring. It was obvious that this film does not follow the typical and formulaic ways in films but they pulled it off so well! It was as if they were able to get inside the psyche of the writers, Hemingway and Gellhorn. It was amazing.

I just watched it this afternoon and it was so beautiful and amazing! It's definitely one of those rare, and very artistically, well-thought out films. 5 stars for this film (5/5)