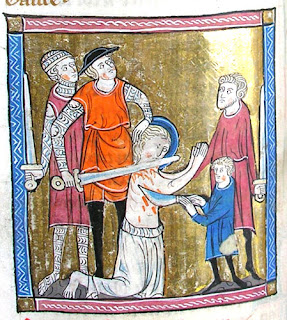 The Apostle of Jesus, Bartholomew, being beheaded and flayed. A new beheading has occurred in an area of France associated historically with the Massacre de la Saint-Barthélemy/St. Bartholomew's Day massacre. Is it a coincidence that St. Bartholomew's martyrdom is commemorated every September 11th? 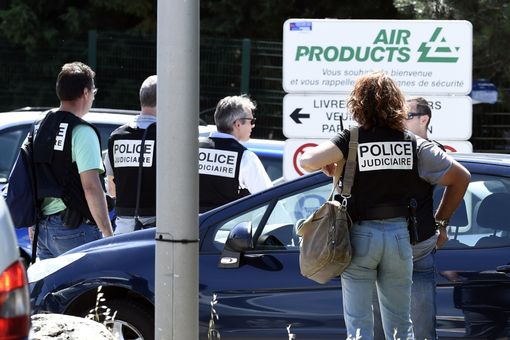 Individuals with an ISIS flag attacked a French factory and have beheaded one person. Late reports say the ISIS flag was raised over the factory.

According to the Associated Press, an official said two attackers arrived by car at the factory, bearing banners written in Arabic, set off an explosion, and then one attacker was arrested.

There are reports of several more victims.
One man died and around a dozen are thought to have been injured at the scene in the town of Saint-Quentin-Fallavier, around 20 miles from the city of Lyon.


An attack at a US gas factory, Air Products, which produce air canisters, in France has left one decapitated in a possible terrorist attack, with the victim's head found impaled on a fence nearby, according to locals.

French authorities have launched a terrorism investigation after the beheaded body was found at the factory, along with a flag bearing Islamist inscriptions. One person was taken into custody, and there are reports a search is on for more.

It is claimed that Arabic writing was found on the head, and French Interior Minister Bernard Cazeneuve is now heading to the site.

The men entered the factory area disguised as deliverymen.

Update:
Is the French beheading one of a series of attacks for June 26? Twitter is exploding with such news: 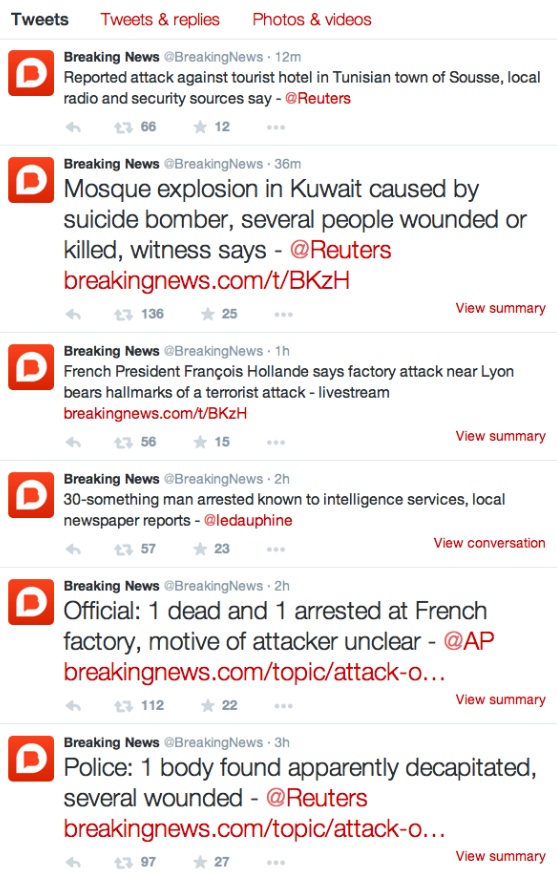 Two tourist hotels in the Tunisian town of Sousse have been attacked on June 26, 2015, and 38 people (30 British nationals) were killed, the Interior Ministry said. Tunisia has been on high alert since March when Islamist militant gunmen attacked the Bardo museum in Tunis, killing a group of foreign tourists in one of the worst attacks in a decade in the North African country. One gunman was responsible.

The Islamic State of Iraq and Syria (ISIS) has claimed on Friday, June 26, 2015, the deadly bombing on a Kuwaiti mosque, which left at least 25 people killed. An ISIS statement posted on social media identified the bomber as Abu Suleiman al-Muwahed and said the target was a “temple of the rejectionists” - a term used by the Islamist militant group to refer to Shiite Muslims - and said dozens were killed or wounded...ISIS has claimed responsibility for bombings at two different Shiite mosques in Saudi Arabia in recent weeks. However, Friday’s attack is the first such bombing targeting Kuwaiti Shiites, who make up around one-third of the country’s native population of 1.3 million people. A witness said the bombing happened when the mosque was packed with some 2,000 worshippers during Friday prayers.

Saint-Quentin-Fallavier is a commune in the Isère department in southeastern France. It is located about 51 km from Grenoble, so it is rather strange that this event is being characterized as the "Grenoble Beheading" by some media outlets. Grenoble is often called the "Capital of the Alps," and relatively far away from Saint-Quentin-Fallavier. 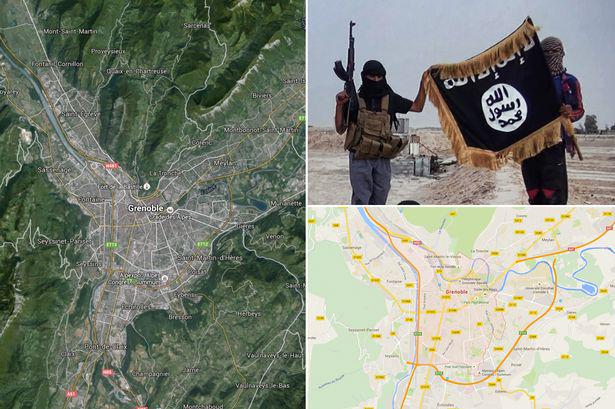 Saint-Quentin-Fallavier is only miles/kilometers away from Lyons, and on the outskirts of that city.

According to the historian Dio Cassius, in 43 BC, the Roman Senate ordered Munatius Plancus and Lepidus, lieutenants of the assassinated Julius Caesar and governors of central and Transalpine Gaul respectively, to found a city for a group of Roman refugees. These refugees had been expelled from Vienne (a town about 30 km to the south) by the Allobroges and were now encamped at the confluence of the Saône and Rhône rivers. Dio Cassius says this task was to keep the two men from joining Mark Antony and bringing their armies into the developing conflict. The Roman foundation was at Fourvière hill and was officially called Colonia Copia Felix Munatia, a name invoking prosperity and the blessing of the gods. The city became increasingly referred to as Lugdunum (and occasionally Lugudunum). The earliest translation of this Gaulish place-name as "Desired Mountain" is offered by the 9th-century Endlicher Glossary. In contrast, some modern scholars have proposed a Gaulish hill-fort named Lug[o]dunon, after the Celtic god Lugus ('Light', cognate with Old Irish Lugh, Modern Irish Lú) and dúnon (hill-fort).

In 1572, Lyon was a scene of mass violence by Catholics against Protestant Huguenots in the St. Bartholomew's Day Massacres.

Talk about a Red Wedding...

The St. Bartholomew's Day massacre (Massacre de la Saint-Barthélemy in French) in 1572 was a targeted group of assassinations, followed by a wave of Catholic mob violence, both directed against the Huguenots (French Calvinist Protestants), during the French Wars of Religion. Traditionally believed to have been instigated by Catherine de' Medici, the mother of King Charles IX, the massacre took place five days after the wedding of the king's sister Margaret to the Protestant Henry III of Navarre (the future Henry IV of France). This marriage was an occasion for which many of the most wealthy and prominent Huguenots had gathered in largely Catholic Paris.

The massacre began in the night of 23–24 August 1572 (the eve of the feast of Bartholomew the Apostle), two days after the attempted assassination of Admiral Gaspard de Coligny, the military and political leader of the Huguenots. The king ordered the killing of a group of Huguenot leaders, including Coligny, and the slaughter spread throughout Paris. Lasting several weeks, the massacre expanded outward to other urban centres and the countryside. Modern estimates for the number of dead across France vary widely, from 5,000 to 30,000.

Among the slain were the philosopher Petrus Ramus, and in Lyon the composer Claude Goudimel. The corpses floating down the Rhone from Lyons are said to have put the people of Arles off drinking the water for three months.

The Politiques were horrified but many Catholics inside and outside France regarded the massacres, at least initially, as deliverance from an imminent Huguenot coup d'etat. The severed head of Coligny was apparently dispatched to Pope Gregory XIII, though it got no further than Lyons, and Pope Gregory XIII sent the king a Golden Rose.

Bartholomew (Greek: Βαρθολομαῖος Bartholomaíos, Latin: Bartholomaus) was one of the Twelve Apostles of Jesus. He has been identified with Nathanael (alternatively spelled Nathaniel), who appears in the Gospel according to John as being introduced to Christ by Philip (who would also become an apostle), [Jn 1:43-51] although most modern commentators reject the identification of Nathanael with Bartholomew.

Christian tradition has three stories about Bartholomew's death: "One speaks of his being kidnapped, beaten unconscious, and cast into the sea to drown. Another account states that he was crucified upside down, and another says that he was skinned alive and beheaded in Albac or Albanopolis", near Başkale, Turkey.

It is intriguing to note that in Islamic literature, the Qur'an mentions Jesus's disciples but does not give their names, referring to them as "helpers to the work of God." Muslim exegesis and Qur'an commentary, however, names them and includes Bartholomew amongst the disciples.

According to the Synaxarium of the Coptic Orthodox Church, his martyrdom is commemorated on the 1st day of the Coptic Calendar (1st day of the month of "Thout"), which currently falls on September 11 (corresponding to August 29 in the Gregorian Calendar). His feast is June 11 in Eastern Christianity and August 24 in the Anglican Communion and both forms of the Roman Rite of the Catholic Church.

At top: Miniature accompanying the text of the Vies des saints, showing a man with a sword beheading St Bartholomew, while another flays him with a knife. From f.102v of MS B.9, a collection of French works (France, second quarter of the 14th century).
Posted by Loren Coleman at 7:42 AM

The name of Air Products jumped out at me, since their main headquarters is nearby, in Allentown, PA and they often sponsor local events and PBS programs. According to Wikipedia, "Air Products also provided the liquid hydrogen and liquid oxygen fuel for the Space Shuttle External Tank. Air Products has had a working relationship with NASA for 50 years and has supplied the liquid hydrogen used for every Space Shuttle launch and the Mercury and Apollo missions." But I've got no clue why they would have been singled out by Islamic terrorists.