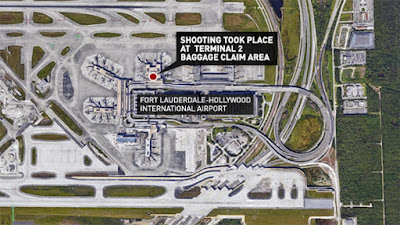 A deadly shooting at the Fort Lauderdale-Hollywood International Airport (FLL) has left 5 dead and 8 injured. 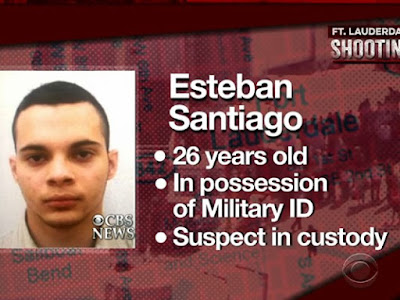 A law enforcement source identified the accused shooter as Esteban Santiago-Ruiz, 26, of New Jersey. The source said the recent father had an active military ID for the U.S. Army. Ruiz was part of the Alaska Army National Guard until August 2016 when he was discharged for unsatisfactory performance.

[In Spanish the meaning of the name Esteban is "crowned in victory." Santiago, (also San Iago, San Tiago, Santyago, Sant-Yago, San Thiago) is a Spanish name that derives from the Hebrew name Jacob (Ya'akov) via "Sant Iago," "Sant Yago," "Santo Iago," or "Santo Yago," first used to denote Saint James the Great, the brother of John the Apostle. Ruiz is a patronymic surname meaning "son of Ruy," a short form of the given name Rodrigo. Rodrigo derives from the Germanic name Roderick (Hrodric), from the elements hrod, meaning "renown" and ric, meaning "power." Ruiz is the 21st most common Hispanic surname.]

Sources say he had a concealed weapons permit. The source added he had a minor criminal and psychological history.

"The gunman was reportedly wearing Star Wars shirt at the time of the shooting," stated several media sources. 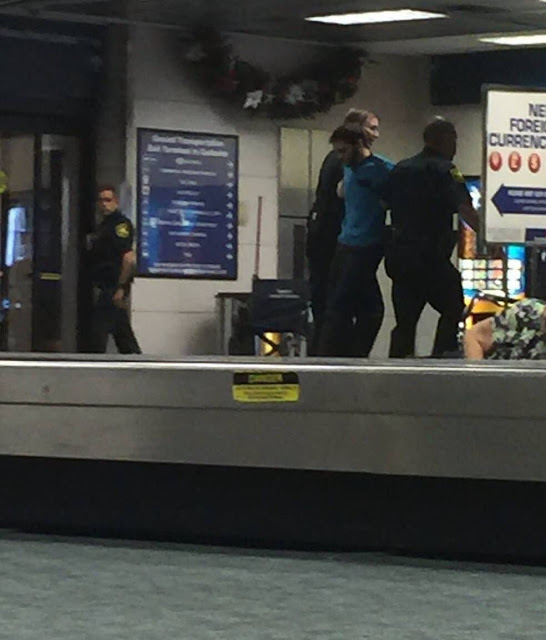 But a view of one of the blurry photographs of his arrest shows the shirt might be a Star Trek shirt.

Authorities said the gunman opened fire around 1 p.m. in the baggage claim area of Terminal 2.

“People yelling, people screaming, everyone in a big pack just running as far as possible away from the shots. Our bus driver wasn’t sure what was going on, he was asking, ‘What’s happening? What’s going on?’ But no one was answering because everyone was in a rush to get safe,” said a traveler named Ben who was at the airport grabbing a shuttle when the shooting happened. 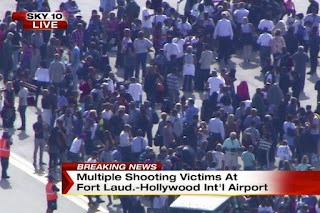 Posted by Loren Coleman at 7:59 PM