There has been a terrorist attack.

Police on Tuesday identified the man who blew himself up the previous night at an Ariana Grande concert in Manchester, England, as 22-year-old Salman Abedi. CBS News confirmed Abedi was known to British authorities prior to the attack.
In a generic statement posted online, the Islamic State of Iraq and Syria claimed responsibility for Abedi's suicide bomb attack, which left 22 people dead, including children, at one of the entrances to the Manchester Arena. Source. 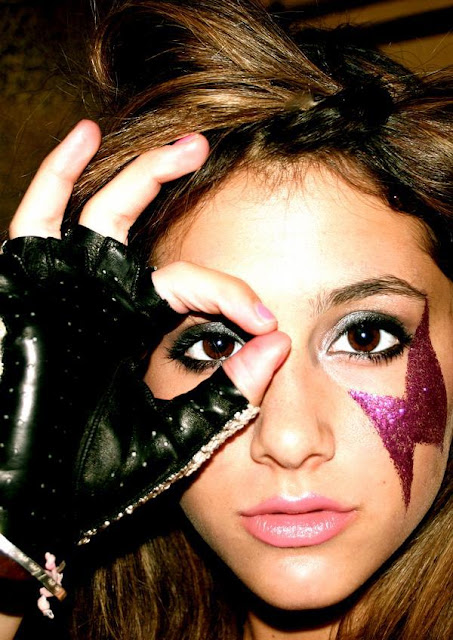 Ariana Grande has been seen as a wannabe Illuminati member for years.

May 22 is the 142nd day of the year. This date is the anniversary of the UK attack on Lee Rigby. On the afternoon of May 22, 2013, a British Army soldier, Fusilier Lee Rigby of the Royal Regiment of Fusiliers, was attacked and killed by Michael Adebolajo and Michael Adebowale near the Royal Artillery Barracks in Woolwich, southeast London. Adebolajo and Adebowale are British of Nigerian descent, were raised as Christians, and converted to Islam.

On May 22, 1176, the Hashshashin (Assassins) attempted to murder Saladin near Aleppo.

On May 22, 1962, Continental Airlines Flight 11 crashed after bombs exploded on board.


On May 22, 2017, Ariana Grande's concert at the Manchester Arena, in Manchester, UK, was emptying and at least one bomb went off.  Police report that it was caused by a suicide bomber. Waves of photos pervaded social media of audience members fleeing the venue bloody and with torn clothing. The crowd was predominantly young kids, teenagers and their parents.

Will Morgan points out, from Wikipedia, "The name of Iran (Persia) originates from Persian word Aryānā (Ariana) meaning 'The Land of the Aryans'...". 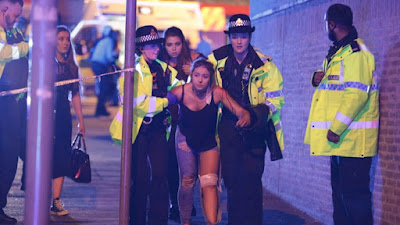 The Greater Manchester Police Department revised their earlier report of 19, to 22 people were killed and 59 people were injured by an explosion as they were exiting the venue. The GM Police are treating the incident as a terrorist attack. 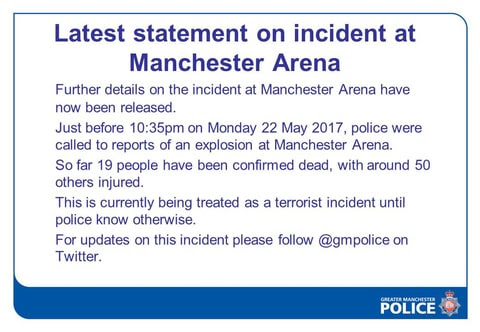 Police believe the attack was perpetrated by a suicide bomber wearing a backpack, NBC News reports. The incident would mark the worst terrorist attack on U.K. soil since the July 2005 London bombings. Wide spread confirmation of the suicide bomber details held up as the bomber's body was analyzed more overnight.

Witnesses believe the attacker used a nail bomb, and the injuries are consistent with the aftermath of that device, the New York Times reports. A nail bomb was also detonated earlier in the day at a Bangkok military hospital, an incident that result in 24 injuries. 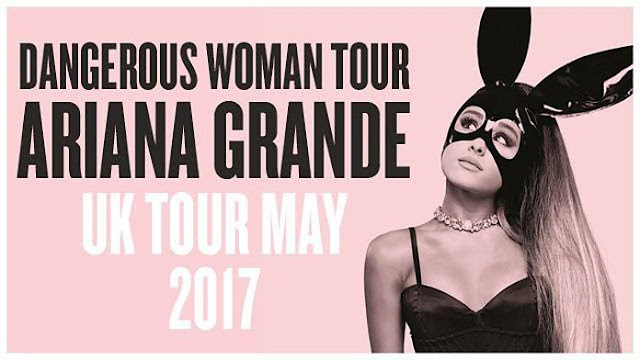 Posted by Loren Coleman at 9:24 PM

The Manchester-bred band The Smiths had two notable songs "Stop Me If You've Think You've Heard This One Before" which was partially banned in 1987 because of the line about committing "mass murder" because of the then-recent "Hungerford Massacre."

And the song "Panic," which they released in 1986, speaks for itself. Morrissey, the lead singer of The Smiths, celebrated (?) his 58th birthday yesterday.

In regard to The Smiths, 'The Queen Is Dead'.

As you pointed out, it was the 55th anniversary of the bombing of Continental Airlines Flight 11. Interestingly, it happened at 9:22 in the evening, local time. 22 is 11 more than 11, yielding 9/11.

You mentioned the bombing earlier that day in Thailand, which was on the 3rd anniversary of a military coup ousting a democratically-elected government.

Reports said the bombing at the Arena happened about 10:35 pm Manchester time, which is 8 hours ahead of Pacific Time---so it was about 2:37 pm my time, and I was picking up my son at school. (A couple months ago, I had a computer reboot on me due to a security update, and it came back up at 2:37 pm; since then, I've been paying more attention to timeliness of events).

Ms. Grande was on her Dangerous Women Tour, supporting her 2016 album of that name. Obviously, since Islamic State has claimed credit, they consider her a dangerous women.

The Manchester Arena was built to help win hosting bids for the city in the 1996 and 2000 Olympics, and eventually they did host the 2002 Commonwealth Games. The success of these games spurred London to bid for and obtain the 2012 Summer Olympics. (The 1996 Games were held in Atlanta, and they were marred by a pipe bomb blast on July 27---my 30th birthday.)

A few events of note at the Manchester Arena: In 2003, Beyonce had a stop on her Dangerously In Love Tour (danger, again), and three events in 2011. On November 6, Britney Spears performed on her Femme Fatale Tour (again about the threat of women to radical Islam), a visit from the WNBA (Women's National Basketball Association in the US) team the Atlanta Dream against the British national women's team, and finally on July 19, the world premiere of a touring stage show event called Batman Live, dedicated to Batman---which connects to the Aurora shooting, as the event does reference the killing of Bruce Wayne's parents (leading him to become Batman) and the death of Dick Grayson's parents (which lead him to become Batman's sidekick, Robin).

So yes, this one really resonates.... My heart goes out to the families...

I never even heard of an Ariana Grande until a few days ago - I just assumed that it was something that you ordered from Starbucks®. Now I realise she is here to usher in the Apocalypse.

This is a great video if you ignore the music.

The perpetrator Salman Abedi was living in Fallowfield.
Fallow field.

Everything seems to be corny these days.

May 22nd, 2011 - An cluster of E-3 tornadoes merge to form a mega tornado with multiple vortexes, crashing through Joplin, Missouri, killing 164 people and severely injuring hundreds of others. It was deemed the deadliest tornado since the 1950's. This Manchester Bombing stood out to me immediately, because I survived the Joplin tornado and was commemorating its 6year anniversary.

I have been wondering if the Manchester bombing was supposed to hide the Thailand bombing (and therefore the coup three years before), and then we had a "M" sequence to distract us further---- Manchester, followed by the death of James Bond actor Roger Moore, and actress Dina Merrill.

Dina Merrill, it turns out, was the daughter of Marjorie Merriweather Post. Therefore, she was an heiress to Post Cereals.... There's your cereal thing happening again!