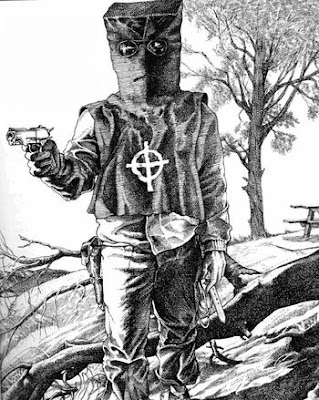 On May 26, 2017, in Portland, Oregon, two people were killed and one was injured after a stabbing on a local MAX train. On Saturday afternoon, police identified the two men killed as Ricky John Best, age 53, who died at the scene; and Taliesin Myrddin Namkai Meche, 23, who died at the hospital. A third man, 21-year-old Micah David-Cole Fletcher, is injured but expected to survive. 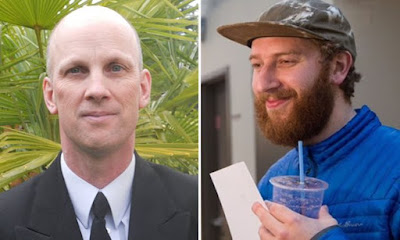 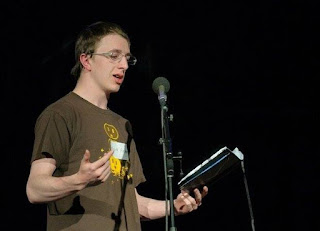 The Friday afternoon disturbance began when a man on a light-rail train "began yelling various remarks that would best be characterized as hate speech toward a variety of ethnicities and religions." Among the subjects of his diatribe were two young women who appeared to be Muslim; one was wearing a hijab.

Portland police have charged Jeremy Joseph Christian with two counts of murder and one count of attempted murder, according to the Portland Police.

"In the midst of his ranting and raving, some people approached him and appeared to try to intervene with his behavior and some of the people that he was yelling at," Sgt. Pete Simpson told The Oregonian. "They were attacked viciously."

The suspect stabbed (in the throat area) the three men before fleeing the train; police located him and took him into custody. 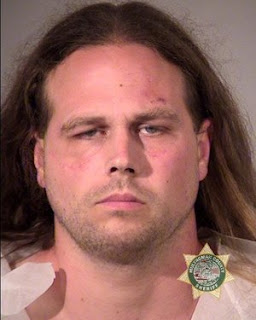 Police identified the suspect as 35-year-old Jeremy Joseph Christian of North Portland, Oregon. He has been booked on two counts each of aggravated murder and intimidation in the second degree, and one count each of attempted murder and being a felon in possession of a restricted weapon.

The suspect was found to have past associations with a free-flowing set of political ideas and causes based more in his own mental health issues than in any foundation beliefs. 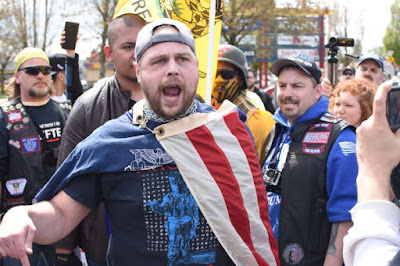 As media accounts detailed, Christian had been a prominent and vocal participant in recent “alt-right” rallies in Portland, Oregon. At a “free speech rally” in Montavilla City Park on April 29, 2017, he was captured on video wrapped in an American flag, giving Nazi salutes. Earlier that day, police reportedly confiscated a baseball bat from him. Local reporters captured him yelling racial slurs and threatening to shoot “anyone who tries to disarm me.”

Cat Davila, who was among counter-protesters at the free speech rally, said Christian “showed up part way through the event and came striding straight toward the counter-demonstrator crowd very purposefully waving a baseball bat by his side and staring us down.”

As he drew closer, Davila said, police “blocked him and took his bat and from then on he just yelled a lot.” 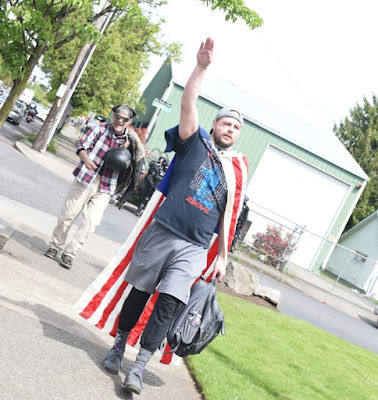 Christian wore, during past demonstrations, a teeshirt showing the drawing of the Zodiac Killer.

The Zodiac Killer was a serial killer who operated in northern California in the late 1960s and early 1970s. The killer's identity remains unknown. The Zodiac murdered victims in Benicia, Vallejo, Lake Berryessa, and San Francisco between December 1968 and October 1969. Four men and three women between the ages of 16 and 29 were targeted. The killer originated the name "Zodiac" in a series of taunting letters sent to the local Bay Area press. These letters included four cryptograms (or ciphers). Of the four cryptograms sent, only one has been definitively solved. 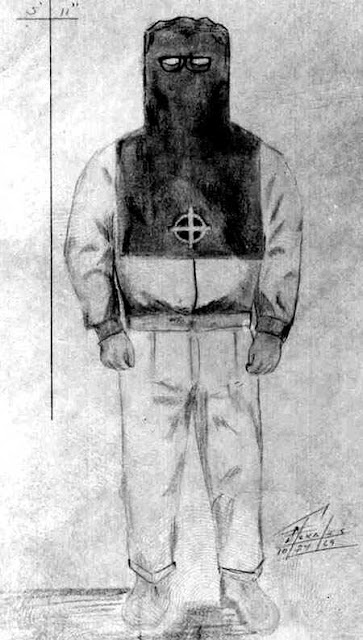 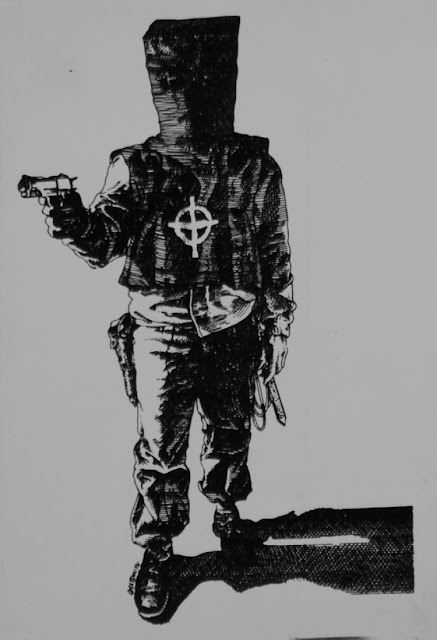 A drawing of the Zodiac Killer suspect has become infamous in popular culture. On September 27, 1969, Pacific Union College students Bryan Hartnell and Cecelia Shepard were picnicking at Lake Berryessa on a small island connected by a sand spit to Twin Oak Ridge. A man approached them wearing a black executioner's-type hood with clip-on sunglasses over the eye-holes and a bib-like device on his chest that had a white 3"x3" cross-circle symbol on it. He approached them with a gun, which Hartnell believed to be a .45.

This is the drawing on the teeshirt worn by Christian.
Posted by Loren Coleman at 8:25 AM

Hitting home for me in more ways than one, as I found out that the two young woman are both students at my son's high school. One of the young ladies, Destinee Mangum, got to meet the surviving hero, Micah Fletcher.

The young man who died, Taliesin, was named for a probable 6th-century Welsh poet, and his first middle name, Myrddin, is a Welsh name version of Merlin, the famed wizard who mentored and worked with King Arthur in Camelot in myth and legend. Myrddin himself supposedly went mad after the Battle of Arfderydd. Taliesin is credited with poems about that battle. There has been some conflation of Myrddin with Merlin.

I've noticed increasingly that the double letter name game also happens a fair amount for witnesses and place names and the weird stuff that keeps happening--- John Keel and Woody Derenberger at Point Pleasant, Lonnie Zamora at Socorro, the truck ramming in North Carrollton in New Orleans at the same time as the missing girl or girls in Carrollton County Ohio that you posted on a few months ago, and the blast a couple of days ago in Kabul, Afghanistan, was blamed by the Haqqani wing of the Taliban (according to the Afghan intelligence agency), where one missing person was 22-year-old Abdullah Azizullah.

Another stabbing, this time a teenager who stole a machete from a suburban Chicago Walmart and killed a Uber driver, which is a reverse of the Uber driver serial killer story for February of 2016.

Following up, on the day of the stabbing, one of the victims was robbed after he was stabbed, with his backpack and wedding ring stolen. George Elwood Tschaggeny (two double-letter names!) was arrested wearing the backpack! Charges include second degree abuse of a corpse.

Another anti-Muslim incident happened, with a couple threatened by an obvious racist, just four blocks from where I live.

Last week, there was another stabbing of note; this was in Denver, and the man wore Freddy Kruger-like spiked gloves and clown makeup. It happened near a Torchy's Tacos restaurant (a Southwestern states chain, in Texas, Oklahoma, and Colorado), on West 11th Avenue. The number 11 showed up in the noose report at the school in Crofton, Maryland, at 11 am on May 11. The person accused is Christian Gulzow, sharing a name with the Portland stabber.

He has now been formally charged.

Copycat knife-wielder on a MAX train! Luckily, the victim was not severely injured, but the wielder of the butter knife did get arrested.

Yesterday, Wed. Jun 7th, was the Portland Rose Festival's Junior Rose Parade. It winds its way through the Hollywood district. I attended it this year, my first visit ever, because my son was marching with his school band from Floyd Light Middle School (and his mom marched as a chaperone). I noticed many, many interesting things related to this blog, but most importantly, it was awesome seeing a number of minority families bringing their children to this event in the area where the MAX stabbings happened, and two men were killed. And many minorities were in the parade, in various school bands, including a few young ladies wearing hajibs, including one of the front sign holders for Alice Ott Middle School (another school besides my son's in the David Douglas School District, the most diverse district in the state; as the principal said at my older son's graduation, more than 70 languages and 60 countries of origin are represented at David Douglas, which is also the largest school in the state of Oregon. It was so very cool to see all of the groups.

I saw numerous things at the parade, and there are links to a tv station's broadcast I'll include below, but the first thing I saw was a guy in the crowd wearing a Batman t-shirt! There were 2 groups of clowns, and two bands of interest--Daybreak Middle School (and Daybreak, of course, is dawn, connecting to the Aurora shooting), and Gordon Russell Middle School, home of the Thunderbirds.

And when I was leaving the place where my oldest son's graduation was being held, on the University of Portland campus... I was behind an SUV whose license included the numbers 237...

It was a wacky day, for certain!

So, a person left a fake backpack on a MAX train, and called in a fake bomb report, which caused closure of the MAX system at the Hollywood station (site of the stabbing), and surrounding streets last week.... Because he wanted attention.

And the guy who stole the slain hero's ring was once a hero himself. Rise and fall of a good man, thanks to addiction.