Another Suicide After Sexual Misconduct Allegation

On Wednesday, December 20, 2017, a religious figure died by suicide by jumping from the Aura building in Chicago, after sexual misconduct allegations surfaced.

This follows in the wake of Kentucky state legislator Dan Johnson dying by suicide, on December 13, 2017, after he shot himself on a bridge in Mount Washington, southeast of Louisville, Kentucky. Johnson was an American evangelical pastor and Republican member of the Kentucky House of Representatives, who was accused of having molested a member of his church in 2012, when she was 17 years old.

On Wednesday morning, Father James Csaszar jumped from the heights of the Radisson Blu Aqua Hotel, a sleek ultramodern skyscraper reaching 82-stories into the downtown skyline. The location is just north of Millennium Park.

Csaszar Name Meaning. Hungarian (Császár): from császár "emperor," probably a nickname given to a self-important person or a status name for a servant of the emperor. Old Hungarian names meaning "king," "prince," "noble," "magistrate," etc. were given to serfs, not to nobles or dignitaries. 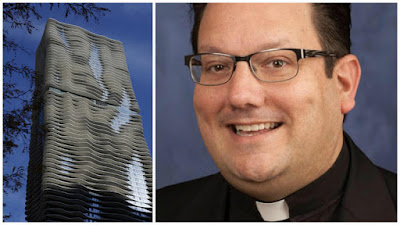 The 82-story Aqua residential tower and hotel in the 200 block of North Columbus Drive.
Rev. James Csaszar, pastor of Church of the Resurrection in the Columbus suburb of New Albany, Ohio. (Michael Tercha/Chicago Tribune; Roman Catholic Diocese of Columbus)

The Aqua was designed by Studio Gang Architects, led by firm principal and founder, Jeanne Gang, and it was the firm's first skyscraper project. The project was the largest ever awarded to an American firm headed by a woman.

To capture views of nearby landmarks for Aqua's residents, Gang stretched its balconies outward by as much as 12 ft. The result is a building composed of irregularly shaped concrete floor slabs which lend the facade an undulating, sculptural quality. Gang cites the striated limestone outcroppings that are a common topographic feature of the Great Lakes region as inspiration for these slabs.

The Aqua is an architectural wonder, and one of the classic buildings produced by InFocusTech (link here); pictured above.

(The Aqua building, an 18th story 556-unit twin-tower at 488 Ocean Blvd, Long Beach, California, has also a history of suicide. William Blair Lamothe, 49, of Long Beach jumped to his death from the 18th floor penthouse, while being given a tour, on Saturday, January 2, 2010.)

On December 21, 2017, the Cook County medical examiner's office announced Csaszar's death from the Aqua was a suicide.

According to the Chicago Tribune:

Three hundred miles away, the ugly news jolted suburban Columbus, Ohio. Until November, Csaszar had worked as a Catholic priest at the Church of the Resurrection in New Albany, Ohio. Then, after misconduct allegations surfaced about the priest, the 44-year-old was placed on administrative leave.
An investigation into Csaszar will continue despite his death, Ohio law enforcement said.

The Diocese's decided to suspend Csaszar due to "questionable text and telephone
communications with a minor," the church stated in a news release. The Diocese went further to note the charges were also related to a "potential misuse of church funds" while Csaszar was serving at St. Rose of Lima Parish in New Lexington, Ohio, roughly 55 miles southeast of Columbus.

Columbus's 10TV reported New Lexington Police sent an email to the Ohio Bureau of Criminal Investigation and Identification with the subject line: "inappropriate relationship between Priest and 16yom."

How widespread are suicides as a result of the waves of sexual assault and misconduct revelations sweeping the world? The two recent deaths in the USA may be the tip of the iceberg. Have others occurred? Certainly the UK is waking up to this connection.
Thanks to Andrew for the initial link.
Posted by Loren Coleman at 3:35 PM