I'll be on television in London soon, on The Paul O'Grady Show on Monday, March 2, 2009. The program is on Olga TV, and will be broadcast live from 5:00 PM to 6:00 PM, local time. While the show is well-known in the UK, it is virtually unknown in North America.

I'll be their invited guest, and the topics will be cryptozoology, the Dover Demon, Nessie, and such. I might even talk about the Hobbs name game. I may be on for only five minutes. Who knows? 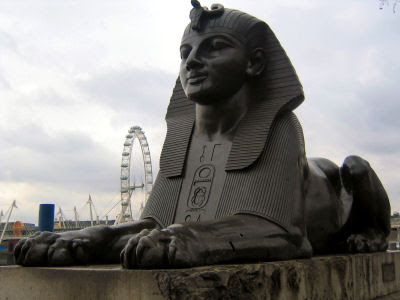 While in London, staying near the London Eye, visible in the distance above, near one of Cleopatra's Needle's guardian sphinxes, I'll take a look at Masonic Egyptian history, through their obelisk dimly lit.

Mohammed Ali awarded an obelisk to England in 1819 but it laid prostrate in Alexandria, where it had fallen centuries before. 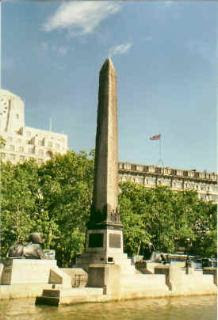 It was not until 1875 that an eminent Mason, General Sir James Alexander, resolved to ship 'Cleopatra's Needle' to London. This now occured, but only because another Mason, Dr. Erasmus Wilson, agreed to put up 20,000 Pounds to ship and erect it. The two engineers who planned its transportation, Dixon and Stephenson, were also Masons. In 1877 the obelisk was encased in an iron cylinder, christened Cleopatra, and towed out from Alexandria. The voyage was a catastrophe. During a storm in the Bay of Biscay the Cleopatra broke loose. Six men drowned. The obelisk did not sink but was recovered and eventually towed to England. At last on 13 September 1878 it was erected alongside the Thames on Victoria Embankment - a less glorious site than Parliament Square, which some worthies had suggested but which the oblelisk's 186 tons might do to underground gas and sewer pipes. For his massive expenditure Erasmus Wilson received a knighthood.

Various items were encased in the obelisk's new pedestal: a box of hairpins, a portrait of Queen Victoria, a shilling razor and chapter 3 verse 16 of the Gospel of St John in 215 languages: 'For God so loved the world, that he gave his only begotton Son, that whosoever believeth in him should not perish, but have everlasting live.' As this was buried out of sight, posterity might find the inscription on the obelisk more eloquent. These spoke of the Sun God Ra, of Horus and Osirus: another God's son whose death gave believers everlasting life.

Cleopatra's Needle is flanked by two faux-Egyptian sphinxes cast from bronze that bear hieroglyphic inscriptions that say netjer nefer men-kheper-re di ankh (the good god, Thuthmosis III given life). These Sphinxes appear to be looking at the Needle rather than guarding it. This is due to the Sphinxes' improper or backwards installation.

Obelisks come in pairs; there are three Ancient Egyptian obelisks that were re-erected in London, Paris, and New York City during the nineteenth century. The London and New York ones are a pair, while the Paris one comes from a different original site, where its pair remains.

Also, I understand there is a bit of a blush on the commemorating column to the Hell Fire of London, 1666, via the monument there. My tour guide and friend who I'll be seeing in London, Bob Rickard, founder and editor of Fortean Times, tells me the monument is "newly re-opened after being renovated."

My thanks to Chris Knowles' brief caption about an obelisk here. It reminded me to mention the forthcoming *coincidence* of my close encounter with a London obelisk, in a couple days.
Posted by Loren Coleman at 9:58 AM

If this is your bag, you'll find so much to look at in London your eyes will be fried!

Yea I did London last summer and got whiplash looking at all the "secret" symbols. No accident that Cleopatra's needle is right across the river from the London Eye. Two major fertility symbols.

It's also directly across from the big Shell headquarters, which flies it's flag (symbol of Isis?) proudly on top. The Templar round church is only a stone's throw away as well.

Thanks for posting this article. It got me thinking about Seattle's own Space Needle.