Stephen King has to deal with some scary things. Having a person media-stalk you and claim you killed John Lennon may be one of the more bizarre on-going events of his life. 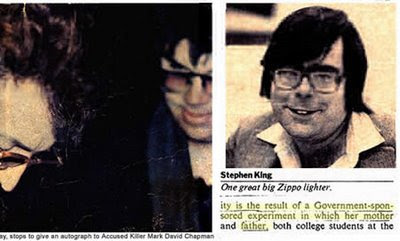 Adam Gorightly's Untamed Dimensions today points to a new incident involving Steve Lightfoot, the man who goes around stating that "the guy who shot Lennon was actually Stephen King and not Mark David Chapman."

My sympathies to fellow Mainer Stephen King who must put up with such insanity in these crazy times. 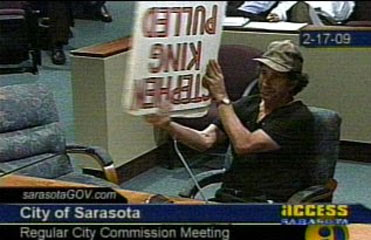 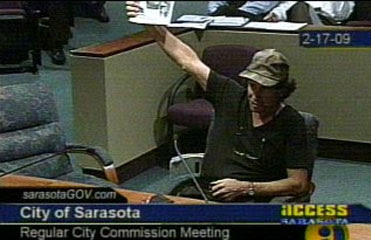 Some excitement [occurred] at the Sarasota City Commission meeting Tuesday [February 17, 2009], when a California man spoke out about who he thinks really killed John Lennon.

During public comment, a man with signs who identified himself as Steve Lightfoot, took a seat in front of commissioners saying he wanted to expose the truth. He then went on to allege that part-time Casey Key resident and author Stephen King was the person that killed John Lennon.

Sarasota mayor Lou Ann Palmer told the man that comments at the meeting must be reserved for city business. "This does not relate to the city of Sarasota," said Mayor Palmer. Casey Key is under Sarasota County jurisdiction.

The mayor summoned Police Chief Peter Abbott, who escorted the man and his signs peacefully out of the chamber to the sound of chuckles from people attending the meeting.ABC-7, Sarasota, Florida 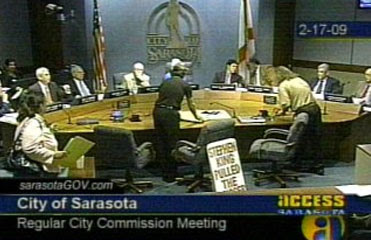 Here are the basic facts:

Stephen King was rather busy in 1980, being a celebrity himself.

The movie based on Stephen King's The Shining was released in 1980. Stephen King's 1980 novel, Firestarter, had an initial print-run in trade hardcover of 100,000 copies. He was becoming a well-known author. By 1980, people were seeking out Stephen King's autographs.

What people should be aware of is that a run-in with King is not an idle matter. The cosmos has a way of catching up with individuals who cross paths with King.

Driver Bryan Smith, distracted by an unrestrained dog moving in the back of his minivan, hit King, who landed in a depression in the ground about 14 feet from the pavement of Route 5. According to Oxford County Sheriff deputy Matt Baker, King was struck from behind and some witnesses said the driver was not speeding or reckless. King's website, however, says King was walking facing traffic.

Earlier that year, King had finished most of From a Buick 8, a novel in which a character dies after getting struck by a car. Of the similarities, King says that he tries "not to make too much of it."

King's lawyer and two others purchased Smith's van for $1,500, reportedly to prevent it from appearing on eBay. The van was later crushed at a junkyard after King had severely beaten it with a baseball bat. King later mentioned during an interview with Fresh Air's Terry Gross that he wanted to completely destroy the vehicle himself with a sledgehammer.Source

Suicide and synchronicity then come to haunt this story.

On September 21, 2000, Smith was discovered dead in his trailer in Brownfield, Maine. Coincidentally, September 21 is also Stephen King's birthday (he turned 53 that day). The cause of Smith's death was listed as an accidental overdose of the painkiller fentanyl, according to toxicology reports. Smith had suffered from a back injury and might have been prescribed the painkiller not long before his death.

Stephen King publicly responded, stating, "I was very sorry to hear of the passing of Bryan Smith. The death of a 43-year-old man can only be termed untimely."

Bryan Smith is a character in the Dark Tower series. King incorporated his accident into the final novel. Roland Deschain and his three companions – John "Jake" Chambers, Oy, the semi-sentient billy-bumbler, and a housewife named Irene Tassenbaum – try to stop King from being struck by the van.

Although many elements, such as the presence of the gunslinger, the boy, and the woman, are fictionalized, the injuries King suffered and conversations King and Smith had while awaiting medical personnel are based on actual conversations, although they are changed slightly from the way King presented them in On Writing. However, two rottweilers are present in the van, and in real life only one, Bullet, had been. This may be a deliberate author's error, meant to preserve the sense of multiple planes of reality.

Portions of King's miniseries Kingdom Hospital are also based on the accident, though most of the plot is derived from the Danish miniseries The Kingdom. In King's version, one of the main characters, Peter Rickman, is hit by a van driven by a man who is distracted by a dog in the back of the vehicle. In the miniseries, Kingdom Hospital is located in Lewiston, Maine, the real location of Central Maine Medical Center, the hospital where King spent most of his recovery time. In another parallel to the real accident, a later scene in the first episode of the miniseries shows the driver who hit Rickman taking unidentified pills by the mouthful out of a bottle. However, the driver in the story is younger than Smith was at the time of the accident. He is also a musician who makes techno/electronica during his spare time. 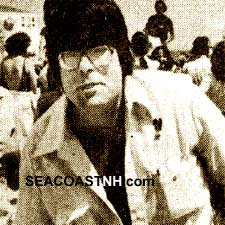 Psychologically speaking, King looks like he was in a totally different place than Chapman in 1980.

I hope Steve Lightfoot gets some help before his demons drive him to do things none of us need to read about in the future.
Posted by Loren Coleman at 6:50 PM

In the movie 27 we're afforded a quick glimpse of Lennon. Who is he played by? Suave British Actor Mark Lindsey Chapman.

Lindsey Lohan was also in that movie with Mark Chapman and Jared Leto.

According to IMDB, Mark Lindsey Chapman also played Nick Hopewell in the the film adaptation of Stephen King's Langoliers as well as ROLAND Burke in the Young and the Restless.

Who is the protaganist of Stephen King's The Dark Towers? ROLAND Deschain.

And finally, for my coup de grace, who was all the internet fanboy's #1 choice to play Roland in the Dark Tower series? only one John BURKE.

Ya' know, the moral to this seems to be it's downright dangerous to be a celebrity in America. Some sad headcase is going to obsess to the point of assult on the high profile object of his delusions. Given that, it's a wonder why so many employ PR teams to insure their pictures and names appear frequently and regularly spashed across the covers and entrails of celebrity trashzines.

Stephen King is an immensely talented author who probably will be taught in American literature classes 100 years from now (the Poe of his age). But his work goes to some very dark places, so it's probably inevitable that unbalanced minds will project crazy fantasies on him.

Just a weird observation that makes me think the real conspirators behind Lennon's murder are rubbing it in our faces... and brainwashing new generations. The terrible and falsified documentary, "the killing of John Lennon", which attributes Chapman's desire to kill Lennon to spirits, demons, and contempt, portrays Chapman wearing an almost identical hat to the bizarre (ear-flapped) one King wears above in the picture from "When Steven King was King". He wears it for almost the entire movie except for when he kills Lennon!! Then they neglect to tell us about how Chapman was silent for nearly a year, and details of the case were misrepresented and back-shelved in the media.