Death During The Oscars 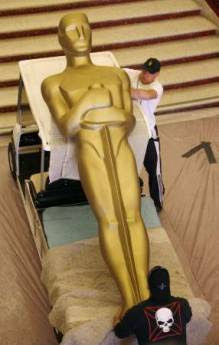 Doesn't it seem appropriate, for most of the day on the Drudge Report, that an image of a man with a death skull on his sweatshirt is what the world sees as it anticipates the Academy Awards?

Whereas The Dark Knight was easily 2008's most successful and popular film, you will only see Heath Ledger surviving the late year surge of reflective critical praise for Slumdog Millionaire, in the wake of the Mumbai attacks. As the happy beat of Bollywood is celebrated during the Oscars, few in the television audience will ponder how blindness is delivered to one child in the movie or suicide is depicted there either. 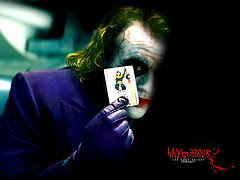 The man holding the card of a decapitated head wins. Ledger will be given the "Best Supporting Actor" award. 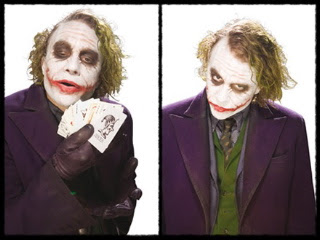 Movies mask or mirror the madness of the realities of the world. And we live in a time in which the news swirling around us is full of death, needless to say. Have you noticed the script unfolding for future films?

On February 10, 2009, a 5-year-old boy was beheaded in Virginia Beach, Virginia (well-known for Edgar Cayce, of course).

Joseph Hagerman III, a 33-year-old (of course) Virginia Beach resident, was charged with murdering his 5-year-old son Joshua in the family's home on Sugar Creek Drive. Police spokeswoman Margie Long said the state medical examiner had ruled the cause of death was decapitation.

Hagerman also faces felonious assault charges stemming from the wounds his wife suffered while attempting to protect their son. After the attack, Hagerman waited outside the residence for police to arrive.

Meanwhile, police in Louisiana report a man died after he fell off a Mardi Gras parade float and it hit him, last night, February 21, 2009. It happened after a parade in the Cajun town of Carencro (CARE-en-crow), about 130 miles west of New Orleans.

Lafayette (of course) Parish Sheriff's Lt. Craig Stansbury says the 23-year-old (of course) was hit as the float drove away from the parade route. Police didn't release his name because they hadn't notified his family.

Crowds in cities and towns across Louisiana are jamming parade routes this weekend as part of celebrations leading up to Mardi Gras, or Fat Tuesday, just before Ash Wednesday ushers in Lent.

There is more but you get the picture. Or, perhaps, you'll watch the movie. 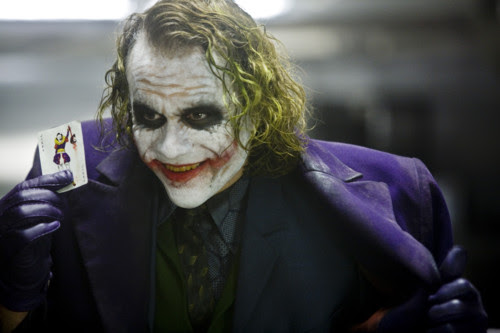 Thanks to Ben Fairhall, Todd Campbell, Richard Hendricks, SMiles, Chris Knowles, and William Thuther for various pieces of the puzzle, and Matt Drudge too.

"But my liveliest interest is not so much in things, as in relations of things. I have spent much time thinking about the alleged pseudo-relations that are called coincidences. What if some of them should not be coincidence?" ~ Charles Fort

Heath Ledger did win the Oscar for "Best Supporting Actor."

The Oscar's tribute footage of all who had died in the last year ran by rather quickly and wasn't exactly too visual or visible. Here's the complete list.

Some people commenting online at lists or forums, while not surprised to see Eyes Wide Shut actor Sydney Pollack in the tribute tape, were shocked to note Maila Nurmi (Vampira) there.

But the entire program had several subtle twilight themes. There was a covert vampire subtheme, as well as Masonic and 007 ("James Bond") ones. Hugh Jackman, the show's host, has played "Van Helsing," and Twilight actor Robert Pattinson presented an award. Also, Frost/Nixon's Frank Langella, who figured in various audience-interactive skits, is, along with Christopher Lee and Richard Roxburgh, one of the few actors to play both "Dracula" and "Sherlock Holmes." (Robert Downey, Jr., plays "Sherlock Holmes" next.)

There was lots happening, symbolically, of course, but I was struck, near the end, in the midst of the montage of "Best Pictures" from 2008 mixed in with clips from "Best Pictures" from the past, right there was the little girl in the red dress from Schindler's List, as the ultimate bow to twilight language. The moment seemed so reflective of Don't Look Now (and In Bruges too), especially since Steven Spielberg was in charge of that final segment. 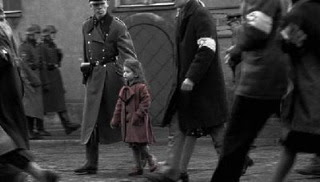 See also Chris Knowles' running "live" commentary that was written during the Oscars, and the over 200 comments at his blog, which are well-worth reading. Knowles has much to say about his mild obsession with red dresses seen throughout the night. Not like there's anything wrong with that. :-)
Posted by Loren Coleman at 1:24 PM

That's a funny (and eerie picture) that you have of the guy at the Oscars. A harbinger of things to come???

I sincerely hope (and am almost certain) that Ledger will win the posthunous Oscar. The morbid synchronicities aside, the guy really turned an unforgettable, award-winning, iconic performance. Plus, he died too young. I didn't like some of his earlier performances but really admired this one.

I agree with your comments regarding Slumdog Millionaire, BTW, Loren.

That's quite a pic. The skull sits over a cross, so probably another version of the "pirate flag" skull and bones. Hagerman - hang man, hanged man?

It probably is an "Iron Cross with Skull," a typical biker group design for tattoos, rings, and other items, such as clothing.

Hagerman is a variation of Hagman (Hag Man? Hag-ridden Man?) and Hager, one of the etymologies for the latter being: "occupational name for a woodcutter, from an agent derivative of Middle English haggen ‘to cut or chop’." He is literally a man who chops things.

He appears to be a paranoid schizophrenic not taking his meds because he has was leaving God to cover the meds. We know a bit more about his motivation:

Looking for any updates on that news I note that the first page of results in the Google news search for "Hagerman" gives:

--
Late last night Twin Falls County Sheriffs officials where informed of a possible plane crash. Search and rescue spent most of the morning searching for the aircraft.

Just shortly before 11am Twin Falls Deputies and search and rescue located an aircraft west of the Hagerman Fossil Beds.
--

And, as I've noted previously (scroll down below the Peter Sutcliffe material), the Abrahamic sacrificing of your children on the instructions of God is not that rare (and many times could be prevented with more faith in medical intervention rather than God) - one blog has been running an Offspring Murder Club. I see that, although the child isn't called Isaac, he has an Old Testament name.

Also from the Abraham Wikipedia entry I see: "For Muslims, [Abraham] is a prophet of Islam and the ancestor of Muhammad through his other son Ishmael - born to him by his second wife, Hagar."

Thanks for the hag man etymology. Starting to wonder about Larry Hagman? Joshua is a potent old testament name, probably derived from Yahshua - the same name given to the son of Mary who english speakers call Jesus. Abraham was told to sacrifice Isaac, and then at the last minute gets a "just kidding". YHWH seemed to be quite the Joker.

---------------
Another beheading just cropped up on my radar (report dated February 13th) - Islam connecting with the above through Haga:

--
Orchard Park police are investigating a particularly gruesome killing, the beheading of a woman, after her husband — an influential member of the local Muslim community — reported her death to police Thursday.

Muzzammil Hassan is the founder and chief executive officer of Bridges TV, which he launched in 2004, amid hopes that it would help portray Muslims in a more positive light.
--

Italy’s Red Cross has launched its biggest vaccination programme since the second world war, with the goal of immunising several thousand gypsy children living in camps around Rome.

The operation began at Casilino 900, a camp on the eastern outskirts of the capital that is believed to be one of the largest gypsy settlements in Europe. Some two dozen doctors were among 200 Red Cross volunteers that included clowns to provide entertainment in one of the big tents erected for the exercise.