Knowing Is A Dark Stargate

The new Nicholas Cage movie, Knowing ~ filled with cryptic numbers, predictions, disasters, and strange MIB-type entities ~ appears to understand there are cinematic occult dots to connect, and also is having fun with the "Fayette Factor." I also propose it is one of the darkest Stargates around.

(I originally wrote and posted an earlier version of this on February 15th, but I am moving this to the top because the film opens March 20th and I have now seen it.)

At "1:12" on the following YouTube trailer, you will see a quick view of the "Lafayette Street" entrance to a subway station. It's movie science fiction. Even though the setting of the film is Boston, this "Lafayette St." stop is in the New York City's subway system during the time frame of the film. There is a message in the moment.

The name game is played daily, and apparently drifting into the movies. One word, "Lafayette," which can be translated from the French as "the little fairy" or "the little enchantment," is an especially fascinating focus, my friends.

This specific element of the name game that Jim Brandon wrote about in Weird America, and that I have discussed in Mysterious America, is what I've come to call the "Fayette Factor."

Since research and writing about it first in the 1970s, several items on this lexilink between Fayette (as well as its related forms - Lafayette, La Fayette, Fayetteville), high strangeness and sightings have been published.

“There are more than two-dozen cities and towns named after Lafayette,” says Diane Windham Shaw, Lafayette College’s archivist, “as well as a river in Virginia and a mountain in New Hampshire.” She notes that there are also many U.S. communities named LaGrange, in honor of the Marquis de Lafayette’s ancestral home.

The cities, towns, and counties across the United States, which are the Fortean hotspots linked to the Fayette Factor, are tied to the renamed Masonic lodges and affiliated sites that the Marquis de Lafayette visited on his grand tour of the country in 1824-1825. His visits were highly ritualized happenings, in which he was involved with laying many cornerstones and other ceremonies. The locations where he was taken to visit are a virtual roadmap of the "special places" in this land.

Knowing was filmed in Melbourne, Australia, using various locations to represent the film's setting, Boston, and other sites touched by the deadly events of this fictional film.

The "John Adams" school name underwent a change, and now in the movie has been replaced with the name "William Dawes." As Bostonians know, William Dawes, Jr. (April 5, 1745 – February 25, 1799) was one of the men who alerted colonial minutemen of the approach of British army troops prior to the Battle of Lexington and Concord at the outset of the American Revolution.

Dawes was assigned by Doctor Joseph Warren (an extremely significant Masonic figure, and thus name in the name game). Dawes has been overshadowed in history by one of the others, a guy named Paul Revere (also under Warren's orders). Besides Dawes and Revere, others, including Samuel Prescott, Israel Bissell and men unknown today, warned of the coming British attack at Concord.

The original draft of Knowing was written by novelist Ryne Pearson, and then the husband-and-wife team of Stiles White and Juliet Snowden (The Boogeyman) rewrote the script.

Others are seeing similar things within this movie, because this film is purposely created to be Masonic occult friendly.

In the following motion picture trailer, Cage is shown, rather quickly at one point, standing at the intersection of Lafayette and Worth in New York City (which does exist, next to Thomas Paine Park, but not at a subway stop).

Australian photographer Luke Tscharke "was walking along Collins Street [in Melbourne] and stumbled upon the film set for the movie Knowing starring Nicholas Cage." 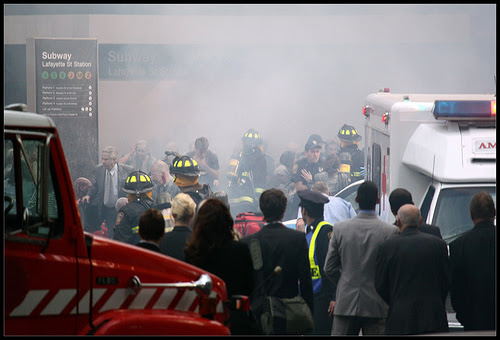 The "Lafayette Street" subway station, created in Australia, stood in for a fictional New York City subway stop. While there are many "Lafayette" streets, avenues, and more throughout NYC, a Lafayette stop is not one of them. Someone made a conscious decision to use this name in this pivotal scene, no matter what city was fictionally chosen.

BTW, the Nicolas Cage character's name, Koestler is an apparent tribute to Arthur Koestler, who was born in Budapest, Hungary, on September 5, 1905. Koestler was a political writer made famous by his one book that focused on the paranormal – The Roots of Coincidence (1972). As Paul Devereux wrote for Fortean Times in 2005, Koestler's work tries "to find a basis for paranormal events in coincidence, or more precisely synchronicity, so that there is only one phenomenon to explain rather than many."

Knowing opens on March 20, 2009, on the spring equinox, the first Friday after St. Patrick's Day.

This movie is very dark, ends in a fashion that may surprise you but should not. There are more themes in this film that need to be highlighted but I'll wait for more folks to see it. It is subtle, but for all of my synchromystic buddies who have blogged about the modern imagery of Ezekiel's vision of the Wheel, dust off those writings for this movie. (For example, scroll down a bit in this part of William Thuther's Stargate-like thoughts, to see more there.) 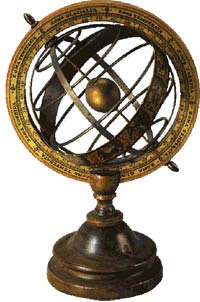 Thank you for your important support during this critical time.

Lafayette is a contraction of La fayette. Fayette comes from the word "fayard/fau" which is another name for the beech tree.
http://www.memoireduquebec.com/wiki/index.php?title=Lafayette_(%C3%A9tymologie)

Did you even read the link embedded in this posting?

Yes, beech tree is one meaning, but please dig a bit deeper.

Go beyond a Quebec site for Wikipedia.

What was dancing underneath the beech tree? Fairies, fay, of course.

my impression was that the subway is in NYC, since there is a Lafayette stop there.

Loren Coleman said...
This comment has been removed by the author.
3:48 PM

In 1558., Nostradamus,
writing to King Henry,
mentions the Chaldean
Alphabet, (numerology).
He includes the code
number 1080, long known
as the "universal" - per
Plato, and others.

Loren Coleman said...
This comment has been removed by the author.
12:21 PM

It looks like the time capsule is under a not-so-suprising 8-rayed star. I just watched the third Planet of the Apes movie, and the apes who escape earth before the mutated humans use the "doomsday device" describe earth as having "cracked like an egg" and "the rim of the earth melted," both being descriptions that would fit the movie poster for this movie. So Nick Cage has done a couple Freemason movies and a couple future-predicting movies, just what the heck is he trying to tell us?

I know this isn't entirely related, but maybe interesting. I was listening to the Fifth Dimension's "Age of Aquarious" last night, and found myself curious as to the authors of the song. Check out the "HAIR" version of the lyrics sometime. Long story short, the production was "born" in a studio on LaFayette Street. The article also had a photo of the three authors, and it looked like one authentic hippie and two handlers to me.

have you had a chance to read my "6 days of Creation - The Ring, the Sphere, and Jimi Hendrix" article?

In it the creation of the rings and eyes are touched upon.

I would, from the reading of Ezekiel, guess his vision to be a description of the design and fractal creation numbers I have found from ancient egyptian pi.

Should be an interesting movie with Cage. He always makes far-out movies of this type. (Re: the awful Wicker Man remake).
I agree the movie is Masonic in tone. Weird.
Hollywood supposedly is crawling with them.

Thanks for pointing this out! Great write up.

Makes me wonder WHY Hollywood decided to film it in OZ rather then the actual locations? Could it be they are trying to connect an "As above, so below" to points on the Earth? Like what is the geographical significances between the actual location and chosen ones? Is there an occult pattern to that?

OR, are they trying to take advantage of some key energy points in OZ [Australia], maybe leylines/dragon lines or perhaps there is some occult significance to the Oz locations chosen that we are unaware of.

Are you aware that L Ron Hubbard's first name is Lafayette?

Hubbard was a disciple of Aleister Crowley, 666, the beast, baphomet. Crowley is also the father of Barbara Bush & Ann Cappelletti conceived w sex tantra & their mothers in 1924.

Barb & Ann's role in the sinister plot of the neopagan neocons & neoliberals of the govt is into something which should be looked by concerned citizens & patriots.

Ann's 20 yr old Sicilian mother was lured to Abbey of Thelema, Cefalu, Sicily by Crowley disciples to have sex tantra w Crowley for money [Ann mother & baby Ann sailed to So. Philadelphia after Ann's birth to be reared in the STREGA witch community of So. Philadelphia.]

I know that John Cappelletti's demolition company planted the nanothermite in the WTC.

I have much more information but this is all I will state now. I don't know anything about Scientology, nor do I want to know anything, but if Hubbard is involved, it must really be glorified witchcraft.

I am glad I found your article. I just watched "Knowing" last week. Learning about Lafayette really makes my research on witchcraft even more necessary.