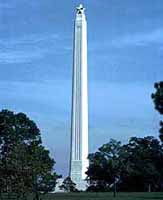 Every year in April the people of Texas, many of them Masons, gather at the foot of the San Jacinto Monument near Houston to celebrate the Texas victory at the Battle of San Jacinto on April 21, 1836, which established independence for Texas....

On the battlefield at San Jacinto on April 21, 1836, the Army of Texas commanded by General Sam Houston, and accompanied by the Secretary of War, Thomas J. Rusk, attacked the larger invading army of Mexicans under General Santa Anna....

Measured by its results, San Jacinto was one of the decisive battles of the world. The Freedom of Texas from Mexico won at San Jacinto led to annexation and to the Mexican War, resulting in the acquisition by the United States of the states of Texas, New Mexico, Arizona, Nebraska, California, Utah and parts of Colorado, Wyoming, Kansas and Oklahoma. Almost one-third of the present area of the American nation, nearly a million square miles of territory changed sovereignty.... 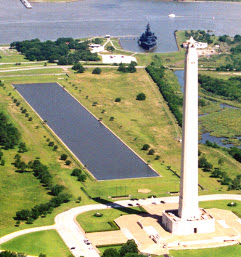 Perhaps it is to be expected that some skeptical words are floated among the general public about the well-known story of how Masons fought on both sides of the War.

It may be that Masons saved the life of Santa Anna but if so, they did not act because he made claim to their mercy as Masons. All of the Masons to whom he appealed knew that Santa Anna disowned Masonry; that further, his many offenses against Texas and Mexican Masons had placed him outside the protection of any Masonic obligation. Santa Anna was saved because the Texas leaders considered him worth more to Texas alive than dead. 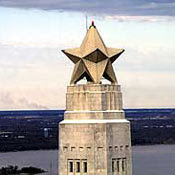 But generally, the following typical accounts are those that define the secret history of the Battle of San Jacinto.

The scouting party that captured Santa Anna was composed of Joel W. Robinson, A. H. Miles, Charles P. Thompson, Joseph Vermillion, and Siron R. Bostick, led by Color Sgt. James A. Sylvester, the gallant young man who bore the "Liberty or Death" flag through the Battle of San Jacinto, the only flag flown on the field by the Texans that day. In flushing the vicinity near Vince's Bayou, the Mexican general was discovered crouching in the tall grass along a small hollow. He was first sighted by Jim Sylvester who suddenly rode upon the fugitive. The Mexican had on a corporal's uniform and was barefooted. Sylvester at once signaled his men scattered around some four or five hundred yards away, and as they began dashing up and flourishing their guns, Santa Anna became excited, and it was at that moment that he first gave the Masonic sign of distress.

Both Sylvester and Robinson were Masons and they understood what "them funny motions meant," and this no doubt accounts for the fact that the captive was not killed on the spot...I believe that Santa Anna's being a Free Mason was all that saved him on that day. Houston, Sherman, and many others of our officers were Masons and while a number of them doubtless favored the execution of the red-banded monster, yet they were bound to observe their Masonic obligations....He and Houston were both Free Masons, and the prisoner made the sign of distress, which Houston, as a Mason, heeded. I was told that at the time by one of our men, who was a Mason also, and I am now certain it was the strong tie of fraternal brotherhood that saved Santa Anna's life.

It is said that Santa Anna owed his life to the giving of the Masonic sign of distress, first to James A. Sylvester; secondly to Sam Houston; and thirdly, to a group of Texas soldiers, among whom were John A. Wharton, George W. Hockley, Richard Bache, Dr. J. E. Phelps and others. Footnote of Fact or Fiction: During the campaign against Texas independence, Santa Anna would send aides to round up the prettiest women for his pleasure. According to legend, he was "entertaining" a beautiful woman of black ancestry and white ancestry (termed "mulatto," by some, hence "yellow") named Emily West Morgan or Emily D. West, at the time of the opening salvo of the Battle of San Jacinto. A song entitled "The Yellow Rose of Texas" was later written about Emily West's role in the battle, which served to lower the guard of the Mexican forces. No primary source evidence corrobates this story, however, and it is now dismissed by historians, but lives on, nevertheless. Some have compared it to the Biblical war story of Jael and Sisera, found in Judges 4:14–22 and repeated in poetry in Judges 5:23–27.

Today, the heroic acts of the young woman are still reverently commemorated by the members of the Knights of the Yellow Rose of Texas each April 21 at San Jacinto.

The historic Emily Morgan hotel located next to the Alamo in San Antonio, Texas is named in reference to Emily West Morgan.

Thanks to flitcraft for the idea.
Posted by Loren Coleman at 9:07 AM

Fascinating piece, Loren. It will be interesting to see how the separatist movement there fares.

Peter Gabriel did a song called San Jacinto on the Security album.

I don't understand. It looks like all he did was raise his hands in surrender. I'd like a more thorough explanation of the special Masonic sign of distress, please.