Soldier Who Imitated The Joker Killed 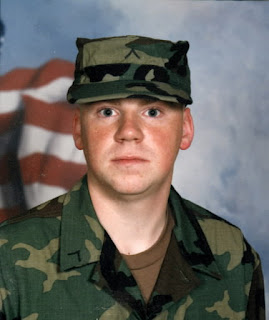 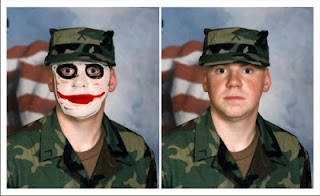 An internet creation of how Army Spc. Christopher Lanum might have appeared.


A soldier dressed and wearing face-paint like Batman villain The Joker was shot and killed by police on March 8th, in the Shenandoah National Park after he pointed a loaded shotgun at them after a chase, an FBI affidavit says. The incident occurred near Front Royal, Warren County, Virginia, according to the Associated Press.

Stone told emergency workers that Lanum stabbed him and used a stun gun on him, authorities said, adding he was taken to a hospital for serious injuries and later released.

Lanum and Montowski fled in her van, which a park ranger spotted about 200 miles northwest of the base, according to authorities. The ranger called for help, and Lanum led police on a slow-speed chase before running over a spike strip laid down by police and crashing, they added.

The FBI said Montowski told them that Lanum handed her the shotgun and asked her to kill him, but she refused. The affidavit says Lanum pointed the gun at police, his finger on the trigger, and refused commands to drop the weapon. A trooper fired through the driver's side window, Lanum's shotgun discharged, and police fired several times.

The trooper and park rangers involved in the shooting were placed on administrative leave with pay pending the outcome of internal investigations, according to a joint state police, FBI and National Park Service release.

Update...note the iconic mask painted on the face on a man in the news for the cover of a recent issue of New York: 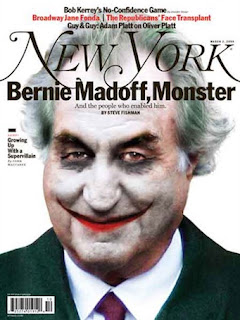 Unbelievable...you know, I had pretty much convinced myself that this would have ended when Heath was awarded the Oscar. I really thought the cycle may have stopped then. I guess this one has a life of it's own now and we could see it for years.

I wonder what Heath Ledger is thinking about right now reagrding this??? Sheesh.

In the comics, the Joker sometimes did have a girlfriend/accomplice, Harley Quinn, who was very much under his power emotionally.

Most of the previous "Joker" killers seemed to have been loaners without girlfriends, at least as far as I recall.

An interesting anomaly. Loren, any insights you could share here?

A psychological profile of "loner" is part of the pattern found across the board with the majority of these suicidal individuals, who end up murdering too, even if they are temporarily with women.

I've updated this posting with another Joker image, which was making the rounds right before this incident.

The M.O. description "Loner" can be misleading and even deceptive. Yes, a number of loner individuals in recent decades have murdered, but to assume that highly socially active people don't murder is a dangerous assumption. The Loner types usually commit suicide and go out with a "bang," but the highly intelligent and socially active psychopath murders and often gets away with their dirty work time and time again. Furthermore, this type will rarely drink the "Cool Aid!" In addition, the facts indicate that actively social individuals kill more people than the loner type. So let's not put too much emphasis on the "Joker/Loner" thing. There have been and there will be socially active murderers some of these types are even in high places. They kill without losing a wink of sleep. Can you think of a few individuals in the recent several decades? What say you? Good day.

With all due respect, I think "Anonymous" comments about the "M.O. description 'Loner,'" directly above, may be mixing apples and oranges - or misunderstanding what I've written.

It is not under dispute that there are difficult kinds of killers and murderers in the world.

But most of the Joker killer copycats are not psychopathic serial murderers who carry out a specific plan, such as the Zodiac killer, with part of the objective being to remain invisible and alive to "enjoy" the game.

The rampage/going postal/school shooters (mostly loners) are suicidal individuals who evolve into homicidal-suicidal killers. That some of these suicidal individuals try to escape or can't followthrough on their original end design to die by suicide or be killed in a "suicide-by-cop" scenario does not automatically make them a socially-connected serial killer.

I am not in competition with anyone saying that one type is more important to profile or prevent than another. Or that "loner" stabbers or shooters are more or less prolific than serial killers. Not at all. Sorry if that was implied.

My goal is identification, understanding, awareness, prediction, and prevention of all kinds of copycat, twilight language, and occult (in the old meaning of the word) homicides. It is not about pitting "loners" versus "socopaths."

Until the humans of earth awaken to the fact that the planet is an experimental lab, for the "rich" to harvest their "animals" (COMMON STOCK) while the "Preferred Stock" depopulate THEIR home ... read Robin de Ruiter and it all fits into the whole composition of a picture show not worth attending.

I know he's dead. I meant what he was thinking looking at us from the Other Side.

I don't like Madoff. But that picture of him is a tad extreme.

Harley Quinn was never Joker's "girlfriend" She was just his slave basically. He didn't care about her at all and being a psychopath he doesn't really have much empathy anyway. And I'm really glad they decided to leave her character out of Nolan's bat movies. Definitely not a good example to young women! Also you have to understand that the only thing that the Joker(especially in The Dark Knight)cares about or wants is Batman! He doesn't think anyone else is even real except the two of them. So yes he is a loner in a way...and he is definitely NOT heterosexual that's for sure! ;)