On Sunday, May 24th, a New Moon was in the sky, a Bengal tiger at the Memphis Zoo bit a zookeeper, a Sikh religious leader was killed in Austria, and then a nuclear bomb was exploded in North Korea and riots occurred in Punjab. 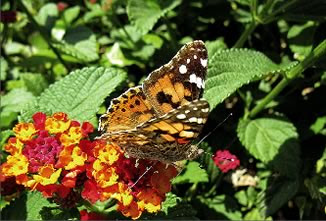 Meanwhile, on May 24th, Malta Today reported that naturalists have recorded thousands of painted lady butterflies, above, (Vanessa cardui) currently migrating over the Maltese islands.

Charles Hoy Fort, author, skeptic and iconoclast wrote about the interconnectedness of nature and the butterfly effect before the term was coined in his books New Lands and Wild Talents. In New Lands he makes reference to a migration of birds in New York that could cause a storm in China.
Source

Horses erect in a blizzard of frogs -- and the patter of worms on umbrellas. The hum of ladybirds in England -- the twang of a swarm of Americans, at Templemore, Ireland. The appearance of Cagliostro -- the appearance of Prof. Einstein's theories. A policeman dumps a wild man into a sack -- and there is alarm upon all continents of this earth, because of a blaze in a constellation --

Sweden -- and it was reported that wild fowl began to migrate, at the earliest date (Aug. 16th) ever recorded in Sweden --

Flap of a duck's wings -- and the twinkles of a star -- the star and the bird stammered a little story that may some day be vibrated by motors, oscillating back and forth from Vega to Canopus.

So the birds began to fly.

The idea that one butterfly could eventually have a far-reaching ripple effect on subsequent historic events seems first to have appeared in a 1952 short story, "A Sound of Thunder," by Ray Bradbury about time travel.

The term "butterfly effect" itself is related to the work of MIT meteorologist Edward Lorenz, and the name stems from Lorenz's suggestion that a massive storm might have its roots in the faraway flapping of a tiny butterfly's wings. His 1972 paper is entitled "Predictability: Does the Flap of a Butterfly's Wings in Brazil Set Off a Tornado in Texas?"

The butterfly effect was first described in the literature by Jacques Hadamard in 1890 and popularized by Pierre Duhem's 1906 book.

The butterfly effect is a phrase that encapsulates the more technical notion of sensitive dependence on initial conditions in chaos theory. Small variations of the initial condition of a dynamical system may produce large variations in the long term behavior of the system. This is sometimes presented as esoteric behavior, but can be exhibited by very simple systems: for example, a ball placed at the crest of a hill might roll into any of several valleys depending on slight differences in initial position.

In the 1990 film Havana, the Robert Redford character, Jack Weil, a 1950s gambler, tells Roberta Duran (Lena Olin), "And a butterfly can flutter its wings over a flower in China and cause a hurricane in the Caribbean. I believe it. They can even calculate the odds."

It is a common subject in fiction when presenting scenarios involving time travel and with "what if" scenarios where one storyline diverges at the moment of a seemingly minor event resulting in two significantly different outcomes. The butterfly effect was invoked by fictional chaotician Ian Malcolm so memorably in the novel Jurassic Park and the movie adaptation. Needless to say, the ultimate movie about this is The Butterfly Effect (2004), with Evan Treborn (Ashton Kutcher) attempting to redo or undo his past/present/future.

The larger meaning of the butterfly effect is not that we can readily actually track such connections, but that we can't.

There do seem to be large examples, of course, of "sensitive dependence on initial conditions." One is developing on the world stage in Austria and in India right now.

There was a New Moon on May 24, 2009, 12:11 Universal Time. At the Memphis (Tennessee) Zoo, a 3-year-old Bengal tiger named Kumari bit a zookeeper in the lower calf on Sunday morning. 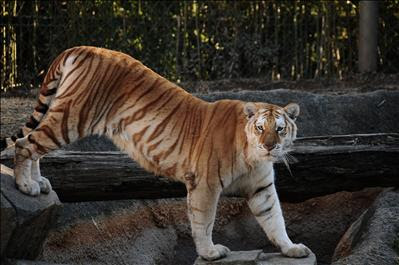 The Memphis Zoo's Kumari, which was part of May 24th's global events.

Furthermore, the US Geological Survey detected what it called a 4.7-magnitude earthquake in North Korea. The tremor struck at 9:54 a.m. (Korean local time) on Monday, 375 kilometres north-east of Pyongyang at a depth of just 10 kilometres. What had occurred was a major nuclear bomb had been denoted by North Korea in that country, at 8:54 p.m., Sunday, May 24, 2009, (local time in Washington, D.C.).

Elsewhere, thousands protested in the Indian state of Punjab on Monday, May 25, 2009, torching a train, vehicles and shops after a Sikh preacher was killed on Sunday, May 24, in an attack on a temple in Austria's capital Vienna, police told Reuters.

Authorities imposed a curfew on parts of the state and the army was put on standby after members mainly of the Dalit or "untouchable" community protested against the attack in Vienna that killed one of their leaders, according to police.

"The situation remains tense but under control," said senior superintendent of police R.K Jaiswal, from Jalandhar town in Punjab where the violence was centered.

At least 16 people were wounded on Sunday, May 24, 2009, when six armed men attacked two preachers visiting from India with a gun and knives during a ceremony in a Vienna temple.

Guru Sant Rama Nand, 57, died in the night after an emergency operation, police said. The second, Guru Sant Niranjan Dass, 68, is in a stable condition.

Both had suffered bullet wounds.

The Guru who died was said to be from the Dera Sach Khand, a religious sect which draws large support from the Dalit community and is considered separate from mainstream Sikhism.

Sikhism officially rejects caste but social hierarchies still prevail in the state, and followers who protested from the Dera Sach Khand identified themselves as from the Dalit caste.

Activists from a powerful political party, which draws its support mainly from Dalits, the Bahujan Samaj Party (BSP), have joined the protests.

On top of being popular among the lower castes, Dera Sach Khand also differs from mainstream Sikhism on religious points, some of which draw the ire of pious Sikhs, analysts say.

"Sects like the Sach Khand broadly follow Sikhism but make their own diversions and as such cannot be included in Sikhism," Dr. Parmod Kumar, a political scientist, said.

"The Dera Sach Khand follow a living guru which Sikhism cannot accept at all," he said. "Sikhs react strongly to this and that is why the clashes between the Dera followers and mainstream Sikhs occur."

Sometimes the butterfly effect, which is so often misunderstood, seems rather obvious.
Posted by Loren Coleman at 9:06 AM

Well, don't forget that it was through correspondence with Wolfgang Pauli that Jung developed his theories on Synchronicity. So this all adds more fuel to that fire, vis a vis the Butterfly Effect and the weird mashup of mystics and physics...

Chris, someday you really are going to enjoy a read of the two Jungian books I cowrote with Jerome Clark way back in 1975 and 1978.

Amid all this, the death of the two top leaders of the Tamil Tigers, in Sri Lanka —5 days ago.

One 'tiger' dies, and another one bites in response.