The panic seems to be behind us. We are not in the midst of the 21st century's version of the Black Death. But could this news cycle have been put into some kind of different perspective? Is it too late to rename the flu?

Maybe someone should have thought more clearly about the name used for this near-pandemic media-driven panic. Certainly, a short survey of what the most apparent association that comes to folks' mind has hinted at a waiting and willing candidate.

I, therefore, with no disrespect to the eyewitnesses to this cryptid or the sufferers of this influenza, nominate for future use the moniker: The Chupacabras Flu. 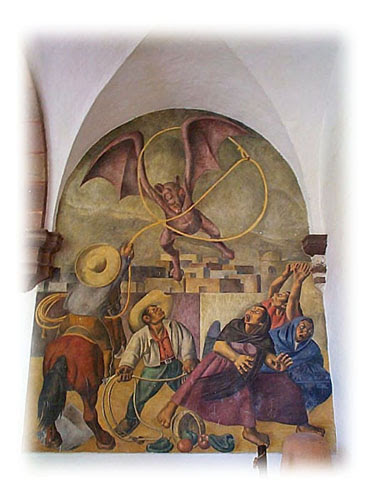 At Bellas Artes in San Miguel de Allende, just a block from the Jardin in the Centro, in Mexico, one may observe the many murals and galleries that line the arched walls. One of them is the above Chupacabras mural. Note the panic in the people. Source.

"Even the mask-wearers tell you the whole thing could well be some big nothing cooked up by the media and reminiscent of the mythical beast Chupacabra[s] — Mexico’s bloodsucking equivalent of the Loch Ness Monster." ~ Helen Popper, Reuters.

"Some Mexican citizens are looking at the health scare through a political prism. 'Remember all the arguende (hoopla) about the chupacabras?' said Oscar Sanchez. Like the stories of the mythical blood-sucking beast that captured hefty media attention a few years back, the Ajijic deliveryman suspects that extensive coverage on the spread of swine flu will serve as a smokescreen to downplay some disturbing national news that is on the horizon. 'It’s the kind of hype that politicians use to distract people from really bad things that are happening around them.'" ~ Michael Forbes, Guadalajara Reporter.

"Others refused to believe the severity of the outbreak, including soft drink and cigarette vendor Maria Bautista Flores, who compared the current panic to the mythical Chupacabras that terrorized rural Mexico in the mid-1990s through tales of an alien creature snatching goats and sheep." ~ ~ David Agren, For Canwest News Service.

"Others wonder aloud if it’s an outright government fabrication to distract the Mexican people from the recession, poverty, national debt, violent crime, drug wars and corruption that face the U.S.’ southern neighbor, much like the 'computer breakdown' which wiped out an opposition candidate’s lead in the 1988 presidential election or the fabricated Chupacabras and 'contaminated milk' scandals of the 1990s." ~ Alexis Charbonnier, Special to the Daily Journal.

Do I hear a second to my nomination of The Chupacabras Flu?

P.S. "Chupacabras" is the singular and plural form of the noun, which is a Spanish word meaning "goatsucker."

Although Wikipedia uncritically lists the 2007 claim of a Puerto Rican comedian and entrepreneur that the word “chupacabras” was coined by him in 1995 (!), a much earlier origin was referenced on the Cryptomundo blog in 2005.

The word "chupacabras" was spoken on television in the year 1960, in an episode of the TV western, "Bonanza." The word “chupacabras” was said by a Mexican character who was talking with one of the Cartwright family characters about a creature that sucked the milk from goats, hence it being one of the “goatsuckers,” and may have been an allusion to the birds, whippoorwills.

Zoologically, night jars and whippoorwills are members of the Caprimulgiformes (goatsuckers) and thus are called “Chupacabras” in Spanish. It seems a natural extension of this usage that a cryptozoological creature, a new cryptid sucking the blood from goats, would also be called a Chupacabras. 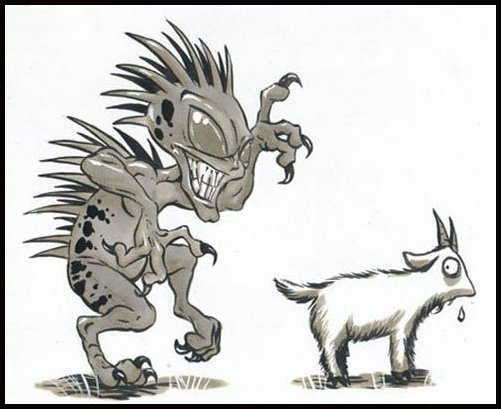 Of course, the more appropriate cartoon now might be a Chupacabras chasing a pig.

This swine flu (H1N1) phenomenon provides us with more questions than answers. One of the most important is why would the WHO consider increasing their pandemic level from 5 to 6, considering that there are only 800 reported cases of infection worldwide and only 121 deaths. Deaths that for now seem to be confined to the Mexican mainland?

Maybe, like you said, this is the "chupacabra flu," a hegelian distraction, pervasively communicated by the mainstream that pervades through every fabric of our consciousness and existence.

was rewatching Tribulation 99: Alien Anomalies Under America (1991) and they mention 'swine flu'. it's a mockumentary....check it out

An orchestrated distraction to get people's minds worldwide off the goatsucked world economy and focus their attention elsewhere. Yeah, Chupacabra Flu works for me.

Certainly gets my vote! It makes as much, if not more sense than Swine flu.

Doing a little research it seems that the mural doesn't really have a proper title, and I would love to know what was the source of inspiration for the artist —who was David Alfaro Siqueiros, a famous Mexican muralist that tried to assasinate Trotsky— since this is before any account of Chupacabras or Mothman.

BTW, the Centro Cultural Bellas Artes has a nickname, El Nigromante (the Necromancer).

[UNDO] Searching more about the famous mural, it's more possible that it was painted by one of the students of the Fine Arts School, than by Siqueiros or any other famous muralist. My bad.

It's incredible the lack of info regarding this mural. A true enigma in itself.

crazy mural! Great stuff! You have my vote "Chupacabra Flu" how fitting!

swines are the only animals in which Allah allows jinns to take host in.