The man who drove his car into a crowded Dutch royal parade, targeting Queen Beatrix Wilhelmina Armgard, had shaved his hair into a Mohawk, like the homicidal anti-hero of the film Taxi Driver before launching the attack. 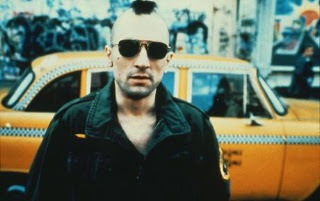 Investigators are focusing on the theory that 38-year old Karst Tates, who died of his injuries on April 30th, had embarked on a mission of vengeance against society after losing his job as a night-shift security guard earlier this year.

His neighbors and locals in the town of Huissen have described an isolated but polite man whose dress resembled that of Travis Bickle, the loner played by Robert de Niro in the 1976 film Taxi Driver, in which he plots to assassinate Senator Palantine, a candidate for the American presidency.

"He wore rolled trousers with high black boots. His hair was often very short and totally shaved at the sides," said one neighbor, according to the London Telegraph.

It will be recalled that the film Taxi Driver formed part of the delusional fantasy of John Hinckley, Jr., which triggered his attempted assassination of President Ronald Reagan in 1981, an act for which he was found not guilty by reason of insanity. Hinckley stated that his actions were an attempt to impress actress Jodie Foster, on whom Hinckley was fixated, by mimicking Travis's Mohawked appearance at the Palantine rally. His attorney concluded his defense by playing the movie for the jury.

The Dutch assassin Karst Tates was attempting to attack Queen Beatrix and other members of the royal family during an annual parade by ramming his black Suzuki Swift car into them on April 30, 2009.

Beatrix (Beatrix Wilhelmina Armgard; born January 31, 1938) has been the Queen regnant of the Kingdom of the Netherlands since April 30, 1980, when her mother, Queen Juliana, abdicated. Her maternal grandmother was Queen Wilhelmina, whom I previously wrote about here, in relationship to the Wilhelmina links to the town of Mena, Arkansas. Queen Beatrix is a member of the Bilderberg Group. Beatrix is an honorary member of the Club of Rome.

In 1965, Princess Beatrix became engaged to the German aristocrat Claus von Amsberg, a diplomat working for the German Foreign Office. Their marriage caused a massive protest during the wedding day in Amsterdam on March 10, 1966. Prince Claus had served in the Hitler Youth and the Wehrmacht and was, therefore, associated by a part of the Dutch population with German Nazism.

Queen Beatrix's father, Bernhard was a member of the Nazi Party, the Sturmabteilung and a special branch of the SS called the "Reiter SS"- an equestrian sporting organization. The Prince was not a Nazi by conviction; these memberships made life easier for an ambitious young man. People defending the Prince have stated that membership was necessary to be a student. The Prince later denied these well-documented memberships.

In the 1930s, with the rise of Adolf Hitler, Prince Bernhard's younger brother, Aschwin, publicly declared his support for the Nazi Party. Prince Bernhard was a member of the honorary German Reiter SS Corps (SS Cavalry Corps). The Prince eventually went to work for the German chemical company, IG Farben. After a period of training, he became Secretary to the Board of Directors at the Paris office in 1935.

During the planning of the invasion of Czechoslovakia and Poland, IG Farben cooperated closely with Nazi officials and directed which chemical plants should be secured and delivered to IG Farben. In 1941, an investigation exposed a "marriage" cartel between John D. Rockefeller's United States-based Standard Oil Co. and I.G. Farben. IG Farben built a factory (named Buna Chemical Plant) for producing synthetic oil and rubber (from coal) in Auschwitz, which was the beginning of SS activity and camps in this location during the Holocaust. At its peak in 1944, this factory made use of 83,000 slave laborers. The patent for pesticide Zyklon B was held by IG Farben. This cyanide-based insecticide was infamous for its use by Nazi Germany against human beings in gas chambers of extermination camps during the Holocaust. At the Nuremberg Trials, 13 IG Farben directors were sentenced to prison terms between one and eight years.

Because Prince Bernhard was a Protestant of royal rank (the Lippes were a mediatized sovereign house), Bernhard was acceptable to Queen Wilhelmina of the Netherlands as a suitable husband for her daughter, Princess Juliana. Bernhard's appropriateness as consort of the future Queen would later become a matter of some public debate.

Prince Bernhard's political affiliations with the Nazi regime have received much attention. Various members of his family and acquaintances were aligned with the Nazis prior to and during the war - a number of these being entertained shortly before and joining the royal wedding party, which occurred on January 7, 1937 in The Hague. Protocol demanded that the prospective Prince-Consort be invited to an audience with his head of state, the German dictator, Adolf Hitler. Hitler himself gives a rendering of the conversation he had with Bernard, in his ‘TischGespraeche’ (TableConversations). The ‘TableConversations’ contains a collection of monologues/remarks/speeches, which Hitler used to give during lunch/dinner-time to those who were invited to the table by him.

Queen Beatrix's time on the throne has not been without protests. A violent riot, for example, occurred on April 30, 1980, during the investiture (sovereigns of the Netherlands are not crowned as such) of Queen Beatrix. Some people, including anarchist squatters, used the occasion to protest against poor housing conditions in the Netherlands and against the monarchy in general.

The date of the attack, April 30th, therefore, is highly symbolic, and, in twilight language translation, it turns out, so was the location.

In the video of the attack, it is clearly seen that Karst Tates' automobile crashes into a monument. But what monument?

The structure is referred to as the "Needle" ~ in English translation ~ by the Dutch reporters. A Masonic monument. Shades of Dealey Plaza. 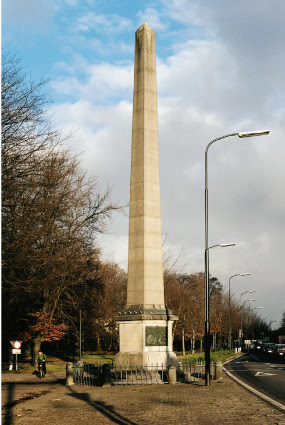 Amazingly, it is the De Naald (in English The Needle), which is an obelisk-shaped monument in the Dutch city of Apeldoorn. It is built of stone and surrounded by a low, iron fence.

The obelisk was dedicated on March 9, 1901, by the citizens of Apeldoorn. It was presented by the people to the bride and groom Queen Wilhelmina and Prince Hendrik. It is also an expression of thanks to the King Willem III and Queen Emma (who are the parents of Queen Wilhelmina). De Naald was the idea of the then mayor of Apeldoorn, Mr Nolthenius. It is 17 meter high, and, of course, based on the design of the Egyptian obelisks. It stands on the corner of Zwolseweg and Loolaan.

The car ended up hitting the Masonic monument De Naald (The Needle). Readers will recall that on 7/7 in London, the location where the attacked double-decker bus came to a standstill was against the Tavistock front door. The Tavistock Institute in London is linked to the Bilderberg Group. The Dutch Royal family are the founders of the Bilderberg group, and they held the 4/30/09 post-attack news conference at the Keizerskroon, which is part of the Bilderberg hotel.

The Dutch Royal bus and the assassin's car was on the street Loolaan. This avenue is 1024 meters long (measured from De Naald to the middle of the church Grote Kerk). From 1808, it was the first paved road in the Netherlands. The road was created by King Louis Napoleon (he was one of the previous owners of palace Het loo). He had this road built from Amersfoort, Het Loo and Apeldoorn to Deventer. It was named the Grand Route.

The latest news is that a seventh person has died as a result of the car attack during Koninginnedag 2009 (Queen's Day) celebrations in Apeldoorn, Netherlands. A 55-year-old military policeman, who was working as a driver, died of his injuries while recovering in a hospital on Friday afternoon, May 1, 2009.

Another woman is said to be in a critical condition. The condition of the other eight people still hospitalized is reportedly stable. Among them are three children.

On Friday morning it was announced that Karst Tates who deliberately drove his car at speed through the crowd of spectators had died in hospital during the night of April 30. His neighbors describe him as a quiet, withdrawn person. His motive for carrying out the attack remains a mystery, according to Radio Netherlands.

About 250 detectives are involved in the investigation into the incident. The police have received more than 750 tips so far. Witnesses to the incident have uploaded 165 photographs and about 10 videos to a special justice ministry website. The police are still urgently looking for photographs of the black car just before it plowed into the spectators.

The mayor of Apeldoorn, Fred de Graaf, has announced that an investigation will be launched into the security provisions surrounding the royal visit.

After the April 30th tragedy Prime Minister Jan Peter Balkenende said it was too early to speculate about future Queen's Day celebrations. After meeting Queen Beatrix and other members of the royal family in Apeldoorn, the prime minister called for serious reflection.

In a televised address, the queen, visibly shocked, offered sympathy to the victims and their relatives. Prime Minister Balkenende expressed "deep shock at the horrible event" and travelled to Apeldoorn.

Most Queen's Day celebrations across the country were cancelled. In the capital Amsterdam, where some 600,000 people were partying, and a few other towns, festivities went ahead but were toned down.

Flags were lowered to half-mast at the palace and all government buildings.

Posted by Loren Coleman at 7:57 PM

Who would have thought so much symbolism could be gathered from this event?

If his target was the royal family why did he hit the monument and not the bus?

Since Karst Tates is dead, we cannot ask him why.

However, upon being interviewed before he died, it was Tates who said he was trying to hit the Dutch Royal family.

One can only speculate that hitting and killing others detoured his route, or perhaps he changed his mind and aimed at the obelisk in a final split second decision.

I could imagine making a diagram of the accident like they use in traffic accident courtroom case. A) Compare the diagram with the stars overhead and see what you find. B)Pour through traffic accident diagrams from around the world and look for exact matches or congruent matches. C) Take the original traffic diagram and superimpose it using the obelisk as the key over obelisks around the world and see what you find.

We only have the word of the police that the royals were indeed Tate's target, since he left no previous remarks, notes, "shrines", etc. We have certainly entered another period of high weirdness, between NYC plane flybys, government driven flue hysteria, and now this Masonic "target" - very curious.

This posting was updated on May 4, 2009, with more information on the historical Nazi, IG Farben, and Rockefeller connections to the Dutch Royal family.