Something very interesting has occurred regarding the story detailed earlier here as "Killed With A Masonic Sword."
First, there were mainstream media stories that it was not a Masonic sword, but merely a samurai sword (as, for example, reported by Time).
Then this was posted by Wombaticus Rex, who wrote:

The source for the Masonic Ceremonial Sword detail, as of yesterday, was Perez Hilton. He was also the first source out with a quote about "the architect of the universe." (I know all this because I was sent a link on FB and the wording got me interested enough to do some trawling with search strings.) I found it odd and interesting that he'd be fucking with people so specifically -- perhaps he delights in fucking with conspiratards, or perhaps he's in on the joke with Lady G and Jay-Z? Either way: odd.

But all of this is merely some kind of incredible disinformation or misinformation campaign. Silly, silly Wombaticus!
Actually, The Daily Mail, The New York Daily News, and The New York Post published more details about the Masonic sword, with photos. 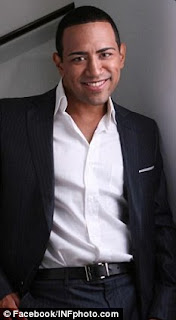 To quote The Daily Mail:

Pictures of the blood-soaked sword used to kill Ugly Betty actor Michael Brea's mother were released [in The New York Post] as grisly details of her death emerged. The 31-year-old is accused of hacking his mother Yannick Brea to death at their home in New York using a 3ft ceremonial blade stolen from a Masonic lodge....[Michael Brea] is said to have carried out the attack in the early hours of the morning after returning from a Masonic lodge meeting on Monday night complaining of a headache. 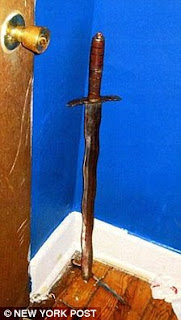 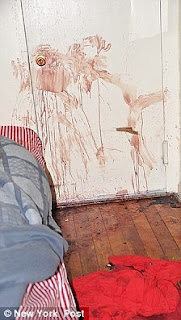 Murder weapon: The sword - stolen from a Masonic lodge - that killed Mrs Brea and a blood-smeared door through which she tried to escape. 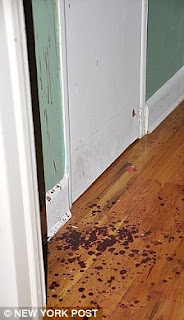 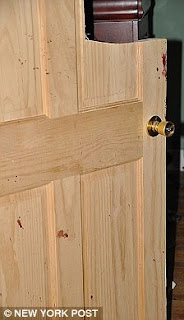 Trail of terror: A blood-spattered hallway and door in the apartment where every room showed evidence of the grisly attack on Tuesday morning 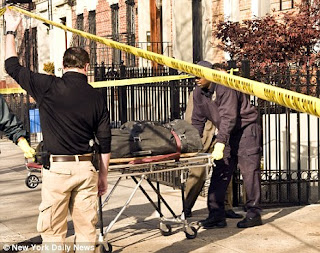 Tragic: The body of Yannick Brea is taken from the Brooklyn apartment.

An unhinged actor Thursday calmly described hacking his beloved mother to death with a sword because he believed a demon had taken hold of her soul.

"I didn't kill her. I killed the demon inside her," Michael Brea said in a chilling hourlong interview with the Daily News in the prison ward at Bellevue Hospital....

Speaking with white-hot intensity and unflinching confidence, Brea described a shadowy descent into a world filled with Masonic symbolism and black magic beginning late Sunday when he snapped awake....

The 31-year-old Brea said he told no one about the dream, but the following afternoon, he said he received another sign while at the Prince Hall Masonic Temple in Harlem, which he'd joined a week earlier.

There, he said, a man approached and tried to put a curse on him.

"[He] kept trying to put something in my hand but wouldn't show it to me. I kept opening my hand. It was a Freemason pin. I wouldn't touch it," Brea said.

He began feeling ill and left, and while riding the train back to Brooklyn, he said, strangers began speaking to him about his mother.

"I felt like Neo from 'The Matrix.' I began hearing voices and feeling powerful," Brea said. "They were asking about the difference between mom and mother. It was a sign."

He went to his room and lit candles, placed a dagger and a 3-foot ceremonial Freemason sword by his side.

Investigators said he had stolen the sword from the Masonic lodge, but Brea insisted his father had given it to him when he was a child.

Brea also arranged three saint cards around him - including one of Saint Jude holding a sword.

"I'm named after a saint myself - Saint Michael. He was protecting the house from the police. They weren't allowed to enter the apartment."

When they finally broke the door down, cops found a trail of bloody footprints and handprints on the walls and floors, and Yannick Brea crumpled on her knees in the bathroom.

Her son stood amid the carnage with the sword in one hand and a Masonic Bible in the other.


"Grand Architect of the Universe means God," he said, referring to an expression neighbors said he shouted as he was being removed from the bloody scene. "I was praising God. To you it might sound silly, but in my culture demons are very real."

Deconstruction Footnote: The graphic imagery of this Masonic-involved murder may result in twilight language and copycat ripples. The photos above were shared to illustrate the level of reporting that is taking place regarding this incident on both sides of the Atlantic Ocean.
Source.
Posted by Loren Coleman at 10:16 PM

I haven't been keeping up on this - I mostly glossed over the story - but I really wonder if he's got a brain tumor that simply hasn't yet been diagnosed. It could explain both the headache and the violent behavior.

It may not necessarily be a misinformation campaign, although I would not put that past the media. It may be that American culture tends to idealize Asian cultures to the point where hearing about a sword conjures to mind an Asian artifact despite a certain lack of evidence. In short, it may be fetish mixed with bad journalism.

Is the man a member of a Lodge or is he a cowan?

Jay-Z has just released 'his' book DECODED with a Rorshach-test type design for the cover, probably made from a blood , you never know.

'Brea's uncle said his nephew, 31, apparently took the ceremonial sword with him while leaving a Masons meeting late Monday night. A rattled Martial Brea said his nephew was typically a smart, quiet man.

"Something happened that made him do it," the uncle told The News. "The Devil entered him."

So I guess he's a Mason.

It seems he joined the Prince Hall Masonic Lodge in Harlem but one week earlier.

It's been a while since I re-read Maury Terry's book, "The Ultimate Evil," investigating the so-called 'Son of Sam' killings in New York. But if I remember right, Terry uncovered a lot of oddball connections between strange groups involved with the Hollywood movie-making world and the East Coast entertainment and social worlds. I don't know of any explicit connection being made between the strange Ronni Chasen murder on the West Coast and this strange murder of a woman on the East Coast, but I wonder if some of those old connections Terry speculated about might still be functioning, still shaping the thoughts and actions of the people within those strange worlds.

The posting has been updated with new information about the Masonic sword, a Masonic Bible, and a Masonic pin, as well as two Saint names that came into play.


Many speculations about oddball cults and celebrities sooner or later mention the Process. Believe it or not, the core members of that group are still very active, still working with celebrities and now have made what must be the most amazing morph ever in pop culture because they're know working as Best Friends Animal Society.

Could be the Most excellent topic which I read all month?!

You made some nice points there. I did a search on the subject matter and found mainly people will consent with your blog.

I find it interesting that the picture of the sword shows it as rather old and beaten up. This might mean that the lodge its from doesn't take care of its things very well.

Examining the image of the sword, it doesn't have any engraving or embellishment which would show it to be masonic.. the other thing that makes me wonder is the dagger shown in the picture on this page. It is not mentioned in any part of the article and it too has no masonic decoration or embellishment. This is a little strange as most Lodge supplies would have a square and compasses on it somewhere and the sword itself appears so plain that it borders on decrepit.